Valentine’s Day has arrived once again, and without a doubt thousands of single folk around the world will again wonder why? More to the point, queer and straight folk alike will look at some of the single men and women in the community and wonder how it’s possible they could be single.

Take these 10 queer icons (not literally). All have emerged as some of the most prominent men and women in the world today, though all share one other quality: they’re probably single. That is, at least, as far as we know. So to any potentially annoyed significant others, we apologize if we’ve included your spouse/boyfriend/girlfriend/significant on this list by mistake. Calm down, and take it as a compliment.

By most accounts though, the 10 folks here remain on the market, as some of the most eligible people alive…

Mayor Robert Garcia made history in 2014 when he became the first openly gay person elected as mayor of Long Beach, CA. For those not familiar with the city, it sits just south of Los Angeles, and serves as a popular departure port for cruise lines home of some fantastic art deco architecture. As an openly-gay man, Garcia has made focus on equal housing protections a priority of his administration, and appointed the most diverse group of city commissioners in history. Even better: he’s done it all before even turning 40. Garcia’s mayoral achievements have earned him the reputation of a politician on the rise; no doubt his handsome looks only sweeten his appeal as one of the nations most eligible queer bachelors. Ride him all the way to the White House and that sweet $10 million book deal after he leave office. 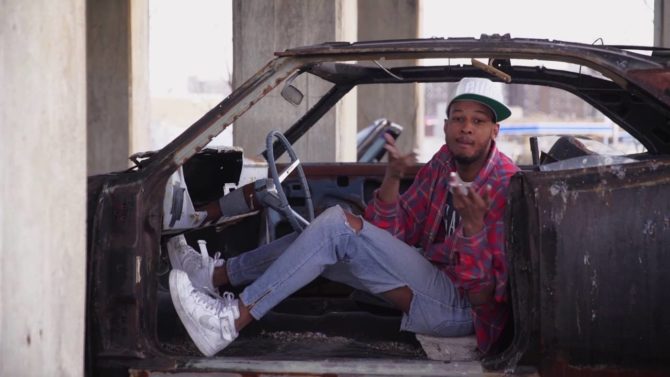 Hip-hop artist Mister Wallace caused a stir in 2016 when he came out of the closet, releasing his rap album “Faggot” to wide acclaim. Critics hailed his genderqueer look and outrageous lyrics as a groundbreaking for a rap artist. Seldom has a hip-hop singer raised the questions of gender and sexuality that propels Wallace’s work. Furthermore, as a staunch advocate of the #BlackLivesMatter movement and of social justice, Mister Wallace can both hold an intellectual conversation, and has enough sexual charisma to make the sex after just as thrilling. His talent as a hip-hop artist makes him one of the most interesting musicians working today, not to mention a star on the rise.

Fashion-loving gays all over the world shed crocodile tears when DILF designer Marc Jacobs split from porn star boyfriend Henry Louis in 2015.  Jacobs, meanwhile, has begun dating again, as he confirmed in a fall 2016 interview. As one of the leading designers in the world, and as a well-known gay philanthropist, Jacobs earns a spot as one super hot DILF. Plus, his company just went public. Plus, who wouldn’t want to hang out with his celebrity girlfriends like Christina Ricci, Lana Wachowski or Bette Midler? Oh, and since Jacobs has not so long ago been spotted on Grindr, we think he’s back on the market. 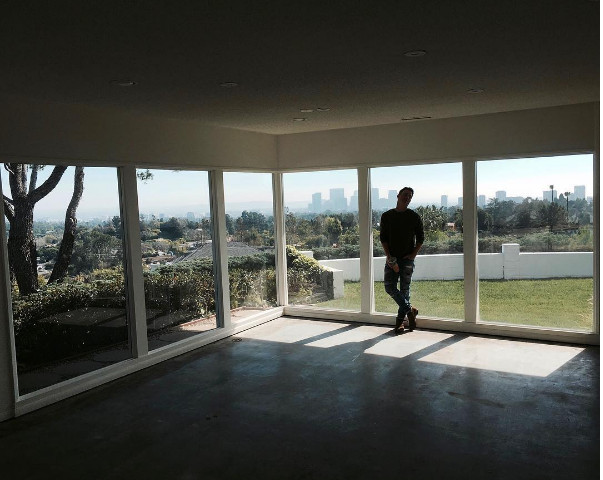 Haynes outed himself in 2016, and since then, one of the hottest men on TV has become a lust object for, well, pretty much everyone. His sincere social media posts don’t hurt his appeal either. The star of popular shows like Teen Wolf and Arrow, Haynes’ began his career as a model for the obvious reasons. He recently purchased a gorgeous pad in the Hollywood Hills, igniting media speculation that the actor might have a more serious relationship on the horizon. Though recently more forthright about his personal life, Haynes still prefers to keep his dating life more private, though he did recently add that since coming out, he feels the happiest he ever has. 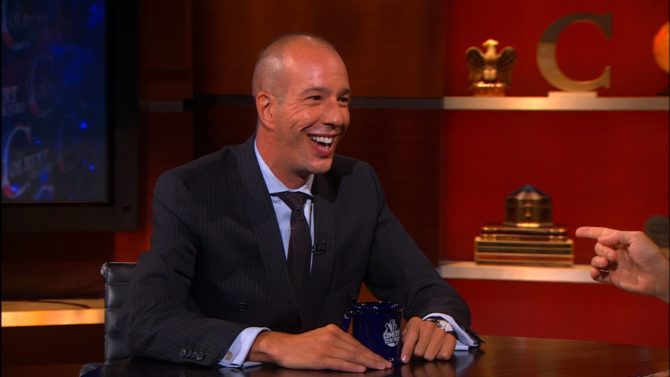 With the Trump Administration hell bent on curtailing civil liberties, along with installing border walls and immigration bans, the ACLU has emerged as a force for protecting American freedoms. As the head of the union, director Anthony Romero will, no doubt, rise in prominence in the coming year. He also happens to be a single gay man…at least as far as we can tell. (Sorry, again, to any potential spouses offended!)

Romero has vowed to block any encroachment by Trump onto personal freedoms, and to fight any discriminatory actions taken by the new administration. The next four years will, doubtless, keep Romero busy. Still an intelligent, successful gay man like Romero deserves a bit of love from his community, especially as he works to protect the LGBT advances of the past few years. Any man wanting to date a hero should find the sexy Romero irresistible.

Cook shocked the business world but no one in the gay community in 2014 when the Apple CEO came out as gay in an interview with Bloomberg. Cook, while calling himself a private person, stressed the importance of the business community to stand up for queer rights, and to provide a role model. Valued at a cool one billion bucks, Cook is along the richest queer people, not that we are keeping track. Yet we must admit that would, no doubt, prove quite the carrot to many a young, gay man looking for a life of security and luxury.

Now, we don’t know for sure that Cook even is single. Though he’s now discussed sexuality numerous times, he prefers a quiet personal life, which we respect. Still, the prospect of scoring such a distinguished businessperson and sexy dude makes our hearts swoon just a bit.

Canadian footballer Michael Sam made waves in 2013 by becoming the first openly gay college football player. He made headlines the following year as well when he became the first out gay man drafted by the NFL. His tenure with the St. Louis Rams lasted only a year, before Sam left the NFL for Canada, scoring a spot with the Montreal Allouttes. He’s since expressed an interest in returning to play with the NFL, though, according to Sam, homophobia has kept him off the American roster. He now gives motivational speeches, and sightings in gay spots around the nation hint that he’s on the market for Mr. Right.

Not every social media baron earns a reputation from having good abs and a sweet guy. Tyler Oakley first earned acclaim thanks to his witty and socially conscious YouTube videos. He’s since become one of the most successful social media personalities in the world–even making videos with President Barack Obama. He’s also a well-known philanthropist, helping to raise money for The Trevor Project, a non-profit organization devoted to preventing suicide in queer and questioning youth. His 2016 debut as host of The Tyler Oakley Show as part of hero Ellen DeGeneres’ digital network earned him a new legion of followers, and a spot here, as one of the most articulate and adorable single gay boys today. Yes, we know his following is primarily young girls and women. But we must admit that we love him, too. 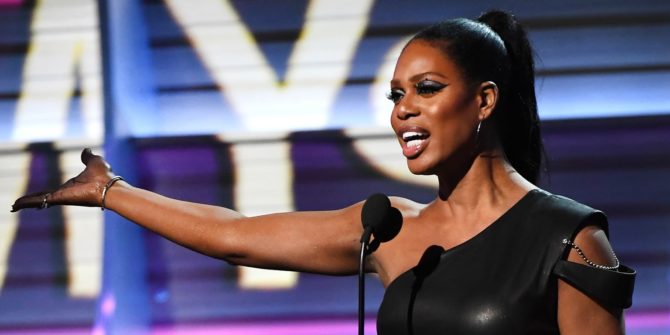 2016 saw trans-trailblazer Laverne Cox hit a new level of celebrity. Besides her long running role on Orange is the New Black and winning an Emmy award for her documentary The T Word, Cox became one of the most prominent celebrities in paying tribute to the victims of the Orlando Nightclub Massacre. She also picked up an honorary doctorate from The New School for her work in promoting gender equality.

Cox has already gotten off to a great start in 2017, taking a lead role in the CBS courtroom drama Doubt, and in earning style raves for her appearance at the Grammy Awards, and leading protests against the Trump total lack-of-administration. While not a bachelor in the most traditional sense (and really, who cares), Cox, if nothing else, proves that women, just as well as men, and trans people just as well as cis people, can qualify as some of the most desirable singles in the world. Rumors circulated in 2016 that Cox had started dating Canadian filmmaker Jono Freedrix, though the actress has stayed mum on the subject. Maybe that means there’s hope for the rest of us!

The handsome CNN anchor pleased the world by coming out in 2011. He’s since become an advocate of awareness for victims of sexual abuse, having revealed his own history in his memoir, and for equality in the newsroom. As one of the most outspoken news anchors working today, Lemon has seen his share of controversies, including some wild shenanigans on New Years Eve 2016 that landed him in hot water with his network. On the other hand, Lemon proved he could do tequila shots at nearly 50 and even had his ear pierced on the air, suggesting that he’s extremely open-minded, always a good trait in a date.

Who is your fantasy Valentine’s date? Let everyone know in comments below…