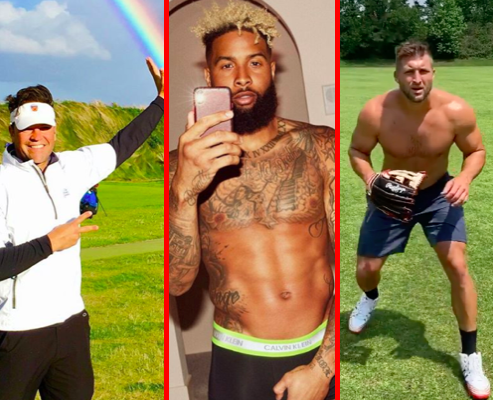 This week, former NBA star Eddy Curry was slapped with a lawsuit after he penned an op-ed titled “The Truth Was Was Worse” for The Players Tribune about his decade-old gay sex scandal that most people had completely forgotten about.

In 2009, Curry was sued by his former limo driver, David Kuchinsky for sexual harassment. The dispute eventually went into arbitration and Curry quietly settled with Kuchinsky for $300,000.

In February of this year, Curry opened up about the scandal to The Players Tribune and accused Kuchinsky of being a liar. Well, Kuchinsky didn’t like that very much because this week, he hit Curry with another lawsuit, this time claiming he violated their confidentiality agreement.

“Not only did Curry fail to meet the expectations that us fans had after he signed a contract with the Knicks,” Kuchinsky’s attorney, Matthew Blit, said in a statement this week, “he failed to adhere to his contract with Mr. Kuchinsky.”

And just like that, Curry and the gay sex scandal he wanted everyone to forget were back in the news.

Be great and walk in greatness. #39 redemption?

The Los Angeles Laker found himself at the center of gay rumors two years ago when a man claimed he had engaged in a sexual relationship with the NBA star and that he later offered him “hush money” in exchange for signing an NDA. Howard denied the rumors. In July 2019, he told an interviewer the whole thing helped him understand why so many people are still afraid to come out. “I saw how a lot of people would feel,” he said while talking about the hate mail he received. “People are afraid to be who they are.”

Hey fam, for all of you not able to fully practice your sport in this time, one way is to take your regular training and incorporate it. For example, I am just running sprints, but I’m also training for fly balls and working on the fundamentals.

The former-NFL-quaterback-turned-MLB-outfielder is a devout Christian. So devout that, in 2012 and 2013, he used his platform as a professional athlete to promote faith-based abstinence and publicly stated he was saving himself for marriage. He even signed a “Statement of Sexual Purity” that proclaimed sex outside marriage was unacceptable and homosexual acts were a sin. This led many to believe he was secretly gay. Tebow, now 33 and still unmarried, has never addressed the rumors.

Reports that the New York Giant might be gay first began circulating a couple of years ago after he got into a fight with fellow player Jason Norman of the Carolina Panthers, who called him a “f*ggot.” Last summer, Beckham told GQ, “Honestly, I wasn’t offended. I’ve never once had no problem with anybody who has their own personal life that they live. I have friends who are gay.” He went on to say he has “no problem with anyone’s sexual orientation,” adding that “Love is love. If you’re attracted to somebody, you’re attracted to somebody.”

38 and I still got it !! Thanks God! #basketballneverstops

After the NBA All-Star’s marriage fell apart in 2013, reports that the relationship ended because he had been “messing around” with his male BFF from college, who he purportedly bought a million-dollar condo for to keep as their private love nest began swirling. Unfortunately, we’ll never know for sure since a gag order was placed on the divorce proceedings.

Throwback to this awesome shoot with @adidasfballus last year ?? today would have been Day 2 of offseason workouts with my guys back in GB, so football is on my mind ?? hope everyone is doing well and hanging in there #hometeam #loveoverfear

Chatter that the Green Bay Packers quarterback was in a long-term relationship with his personal assistant/roommate first began in 2013. Though Rogers never addressed the reports, his Evangelical father did, putting out a statement calling the whole thing “disgusting.” The rumors resurfaced again just last month when Rogers’ ex-girlfriend, actress Olivia Munn, told an interviewer that she had this “one boyfriend” who refused to go down on her and would only have sex from behind with the lights off, leading her to believe that he was gay. Though she didn’t call Rogers out by name, many assumed that’s who she was talking about.

Related: Olivia Munn unleashes homophobic micro-aggressions on ex-boyfriend before outing him on podcast

This went as predicted #justbeforethefall

Speculation about the NFL hall of famer’s sexuality first began in 1995 when sports columnist Skip Bayless claimed he was into both men and women. Aikman, who believes homosexuality a “lifestyle choice,” denied the accusation, but Bayless insisted it was true, saying “A number of the black players, with whom I was close, contended that Aikman was bisexual.” In 2016, nearly 20 years later, Aikmen expressed that he was still upset about the whole thing when he trashed Bayless in a Sports Illustrated interview.

Related: Troy Aikman Is Still Not Over Skip Bayless Speculating He Might Be Gay Over 20 Years Ago

#TBT nothing like being able to clean up er once and a while. #Fresh #Truth #Kordellism

The former Pittsburgh Steelers quarterback spent much of his career dodging reports about his sexuality, right up until his retirement in 2012. People sort of forgot about it for a while. Then in 2015, they began gossiping again after Andrew Caldwell, best known for his breathless pulpit proclamation “I’m not gay no more!”, announced he and Stewart were lovers. Stewart, irritated, responded by telling TMZ, “There’s no room in my personality for that lifestyle. It’s not what I believe in.”

Sending out a prayer for all you guys. Stay Positive! God Bless.#grateful? #golf #tuscany

The retired baseball player addressed the gay rumors that followed him during the last six years of his career in his 2013 memoir Long Shot, writing, “I don’t know where the rumor came from, although I’ve heard many theories, including one that I suppose makes the most sense to me, involving a former teammate and his agent.” Nevertheless, the rumors persisted. Piazza later told an interviewer, “I can’t control what people think. I can say I’m heterosexual. I date women. That’s pretty much it.”

Wait a minute … Nick Young??? 2020 is toooooooo much pic.twitter.com/DdplCj3HXb

The Los Angeles Laker took to Instagram this past April to clear the air about his sexuality after he commented “sexy lips” on one guy’s Instagram page and then was photographed holding another guy’s hand. The other guy ended up being fellow NBA player Jordan Clarkson’s younger brother, Bear, who is a friend of Young’s. After initially joking with Bear that it was “time to come out,” Young put out a second statement saying he was “fooling” and that it was supposed to be a joke.

Subscribe to Queerty for a daily dose of #kordellstewart #nickyoung #odellbeckhamjr. stories and more