From gay bed & breakfasts that launched in the ’60s Castro to the groundbreaking Phoenix Hotel in the Tenderloin, home to rock stars and celebrities, to hundreds of hosts at Airbnb, San Francisco has created unique hospitality for the millions of visitors who pour into the city every year, many who arrive for pride, Folsom Street Fair or dozens of other only-in-SF affairs.

When the city calls to you for a visit — and it will call, often — here are some of the best places to park your luggage while you’re out having an adventure… 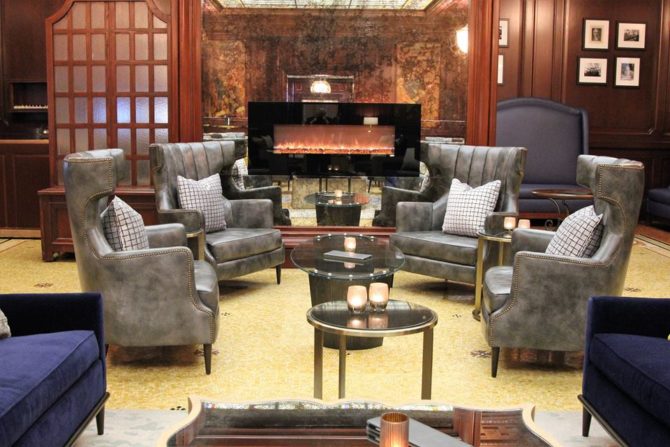 What could possibly be more majestic than a palace for a hotel? You’ll feel like royalty as you stroll through the garden court, surrounded by marble and stone and gorgeous chandeliers. It’s San Francisco’s oldest surviving hotel, an institution since 1875. Ceilings arch high above, and the indoor pool is the lap of luxury. It’s in a great location, too — close to BART, and also to a Pied Piper bar and Ghirardelli Sundae Shop. 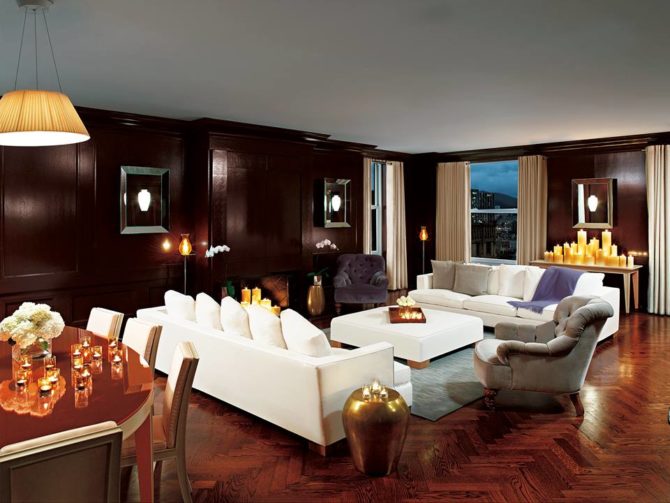 Theater queens, rejoice: this hotel is perfectly situated amongst the theaters. Just upstairs from the classy old-timey Redwood Room is the Clift in a glorious old building that’s been retrofitted with modern amenities and a boutique sensibility. Sink into some plush chairs in the lounge, or checkout the Spanish Suite by the covered terrace. You may want to keep your wits about you when walking at night, just as in any major city, but fear not: guests report “hunky security guards” to keep you safe. The Redwood Room bar, constructed of 200-year-old polished Redwood from Northern California logging forests, is a sight to behold. 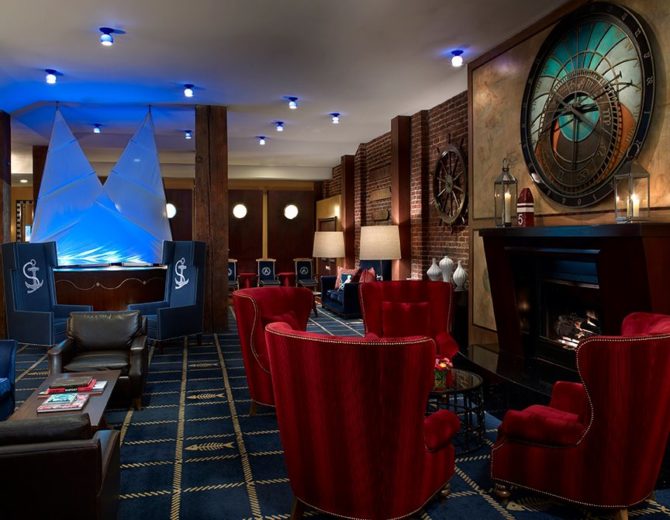 If you want an astounding view of the bay, look no further. You’ll be in arm’s reach of everything you could possibly desire at this hotel: the nearby transportation options are plentiful, from taxis to street cars to cable cars. You can even take a free bike from the hotel to tour this city. And the gifts don’t end there: stop by the lobby for free hot chocolate and wine before heading out to see nearby Coit Tower, the Filbert Steps or Levi Park. 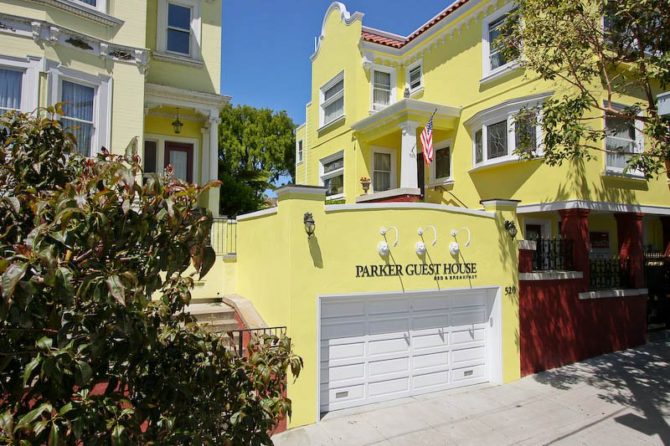 Nestled snugly in the heart of the Castro, you’ll feel like you’re relaxing at home the moment you arrive at this gay institution. A delightful bed & breakfast, Parker is located footsteps from mass transit but you won’t want to travel far from the bars of the ‘Stro and the sprawling picnics of packed Dolores Park on a sunny weekend day. There’s so much eye candy everywhere you turn and possibilities around every charming corner. 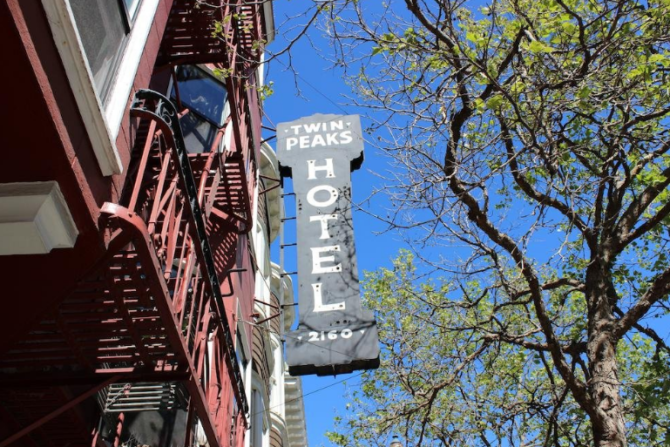 Don’t worry, it has nothing to do with the TV show — it’s named for the hills above the Castro, or maybe it’s named for the famed bar with a wraparound glass windows. In the heart of the Castro, you’ll feel like you’re awash in local history. It’s a bit cosier than the the more expensive luxury suites you get in downtown hotels, but for budget travelers you can’t beat the location and LGBTQ-friendly staff.

It’s the modern design–the blue tinted glass makes it a landmark not to missed–and remarkable panoramas that make The Intercontinental a truly magical place to stay. Somehow, every single person you meet turns out to be the most helpful, friendly individual on Earth. That accommodating reputation extends from the house restaurant, Luce, all the way up to the comfy beds. 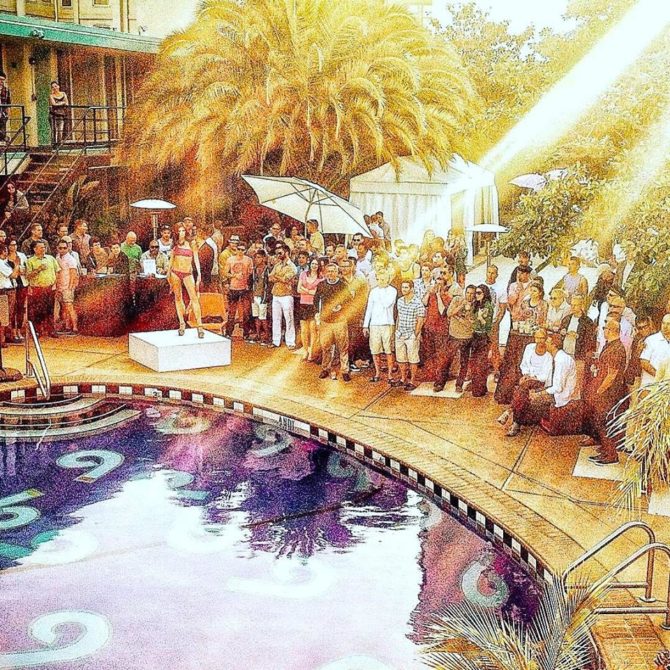 If kitsch is your thing, there’s no other hotel in the city that’ll outdo the Phoenix. With a bold color scheme and wild decor, there’s plenty to catch you eye. It’s Miami Beach in the middle of San Francisco. And while the party atmosphere may not be for everyone, this is just the place if you like a late-night splash in the pool (well, at least until 10pm). Artsy creativity practically bursts from every nook and cranny — and there’s a campy mid-century restaurant attached, too. 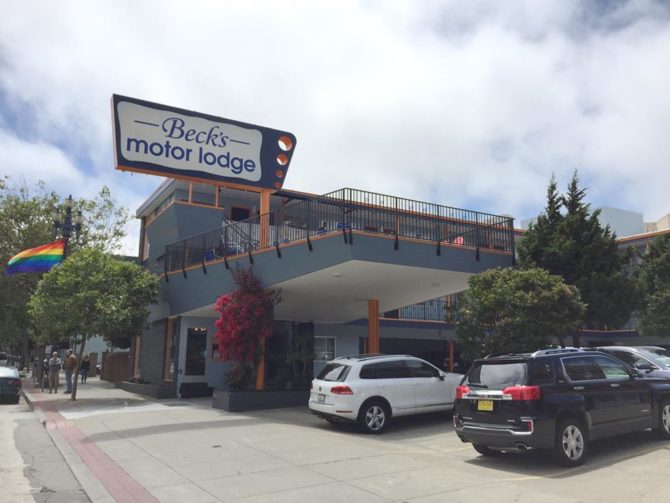 In the heart of the Castro, you’ll find an old-fashioned mid-century structure that looks more like something in the middle of Palm Springs than the city. The location is convenient for all things gay, the prices reasonable, and its recently had a nice facelift. If you are gay, the place comes with a very colorful reputation, much of deserved. Just tell local people where you’re staying and just watch their reaction. 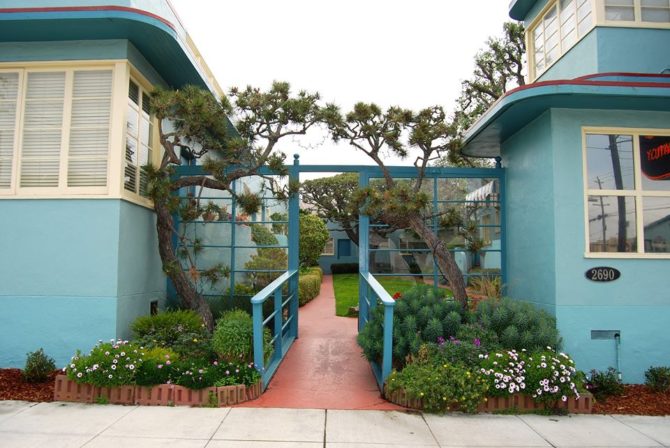 If you’re ready to get away from it all, make your way over to the beach for a super-cute getaway. It’s the first motel ever built in the city, and it’s got an early-1900s feel that can’t be beat. Built the same year as the Golden Gate Bridge, the Ocean Park Motel feels like a fantastic time warp. 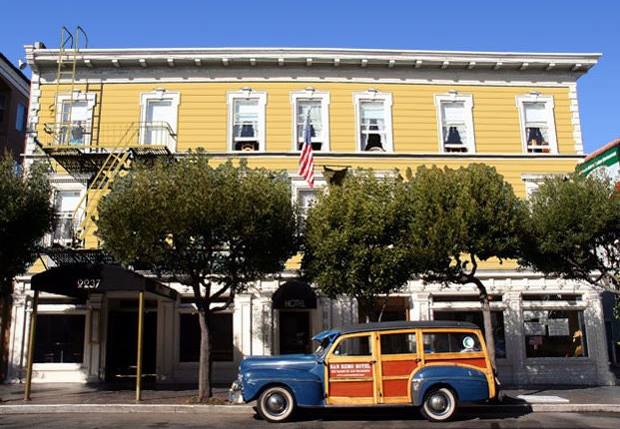 Another budget-friendly option, the San Remo in North Beach has personality in spades. A turn-of-the-century jewel, queer travelers will love the friendly service and immersive ambience. It feels like you’re staying with family thanks to the personal touches in the decor. Trader Joe’s is right next door — perfect for stocking up in the room fridge. Washington Square Park is just blocks away, which is where you’ll find some of the best Italian restaurants in the world. The downside? North Beach may well be the least gay ‘hood in the city, but then again, that’s what Lyft is for, right?