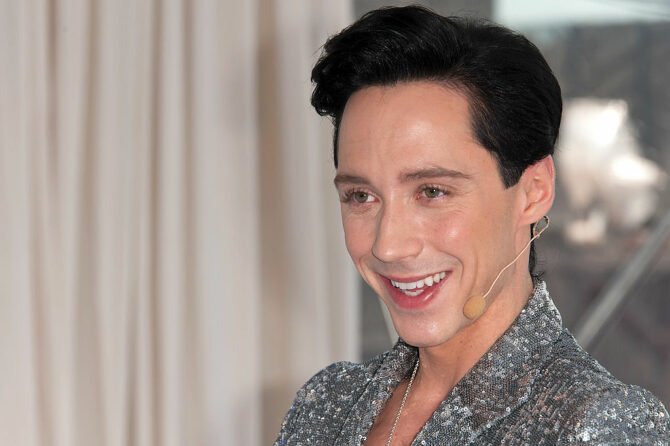 Johnny Weir, the Olympic figure skater turned television commentator who never fails to sparkle, returns to NBC Sports with bestie and Olympic gold medalist Tara Lipinski for live coverage of the Winter Games in Beijing, which begin February 4. Millions of American viewers will once again, like South Korea in 2018, get their ice news and style cues from the duo’s smart analysis, witty banter, and coordinated on-air looks.

If it seems like the platonic power couple already served Olympic realness just months ago, that’s because they did — they co-hosted the Closing Ceremony of the 2020 Tokyo Games (postponed until summer 2021 because pandemic). Followers of Johnny’s social accounts will recall the madcappery of that trip: mugging with Michael Phelps, “soup can but make it fashion”, and a well-crafted clapback to haters.

Kudos to Johnny for commanding respect in an industry lined with pink ceilings. The sports world is not the queer-friendliest of places — as Johnny has acknowledged — even for a world-class athlete. That he’s blazed his own trail, both on and off the ice, is a testament to his authenticity and fearlessness, not to mention his sheer force of personality. Who among us could have survived that divorce in one piece? Through it all, Johnny continues to grow, adapt and flourish, making him a role model for LGBTQ men everywhere.

To celebrate another Olympic season of the Johnny and Tara show, we’ve put together 10 of Johnny’s greatest moments through the years…

Let’s start with Johnny and Chaz Bono at the GLAAD Media Awards, Johnny’s first. The two took to the stage to welcome the 1000 young adults in attendance and to remind viewers of the important work in visibility and representation going on in GLAAD’s young adults program. 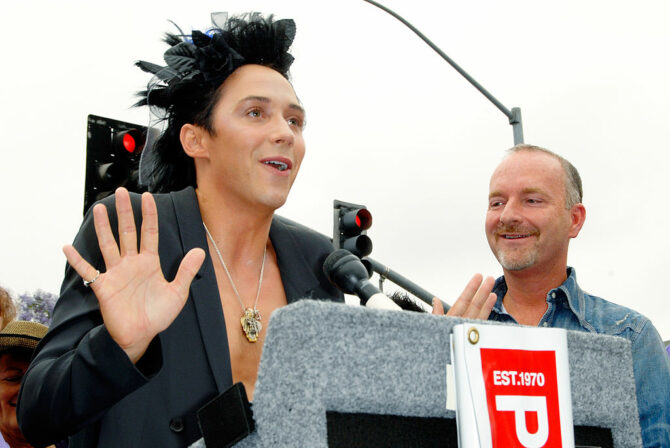 As the Grand Marshal of the L.A. Pride Parade, a role previously held by Cyndi Lauper and Kathy Griffin, newly out Johnny spoke words of queer truth and courage before proudly leading the parade through West Hollywood. 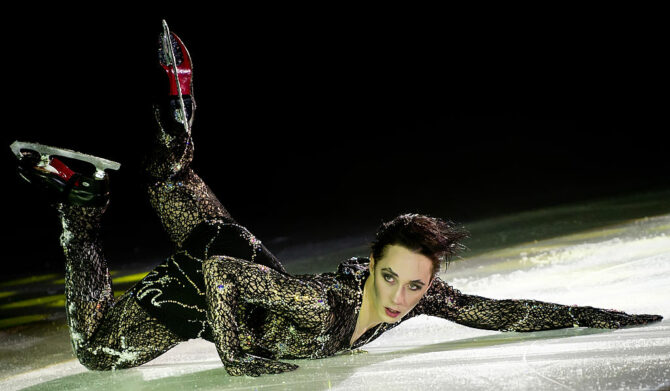 Let’s have a moment for Johnny’s on-ice style. This dramatic cobwebby number that he wore during the “Holiday Dreams on Ice” show put the world on notice that this rising star was not about to conform to skating’s fusty standards.

Welcome To My World 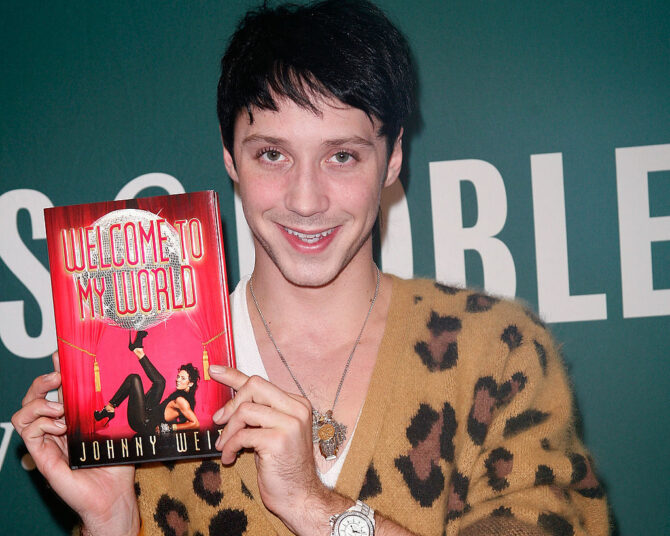 Johnny crossed a queer milestone with the publication of his autobiography, Welcome to My World, in which he tells his own life story in his own words in his own way. Imagine having enough happen in your life to write a book by the age of 28.

Night of a Thousand Gowns 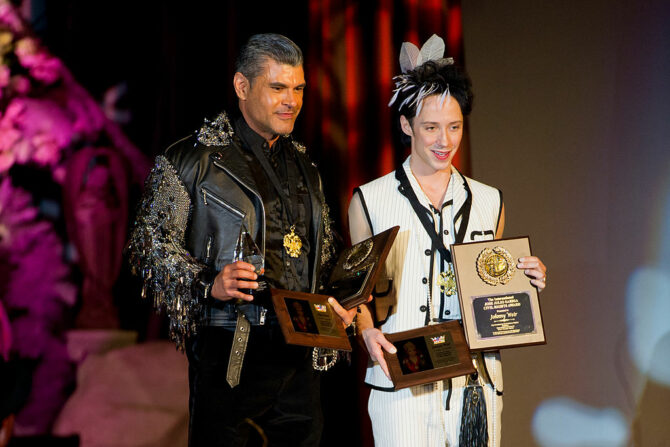 Johnny established a non-binary personal style early on. Here he is at the Night of a Thousand Gowns to receive an award for his contributions to the advancement of the LGBTQ community wearing an androgynous suit from Thom Browne. 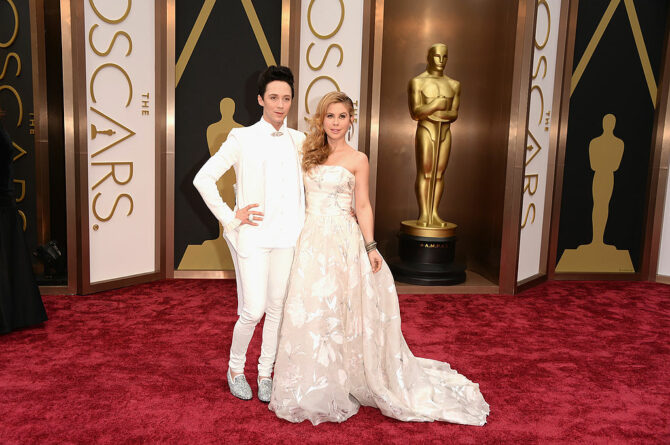 Johnny and Tara were asked to cover the Oscar red carpet for NBC’s Access Hollywood. No stranger to tight pants (how better to show off those chiseled gams?), Johnny said his white suit was a vintage find, paired with crystal-encrusted loafers for a touch of haute camp. 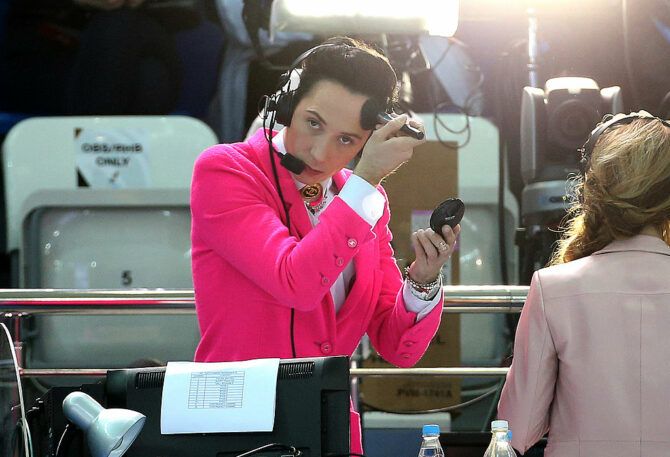 Johnny and Tara — plus the third member of the trio, Terry Gannon — became NBC’s primary figure skating commentators at the, Russia, in 2014. Here he is primping before live coverage on day four — in a Chanel jacket, no less. 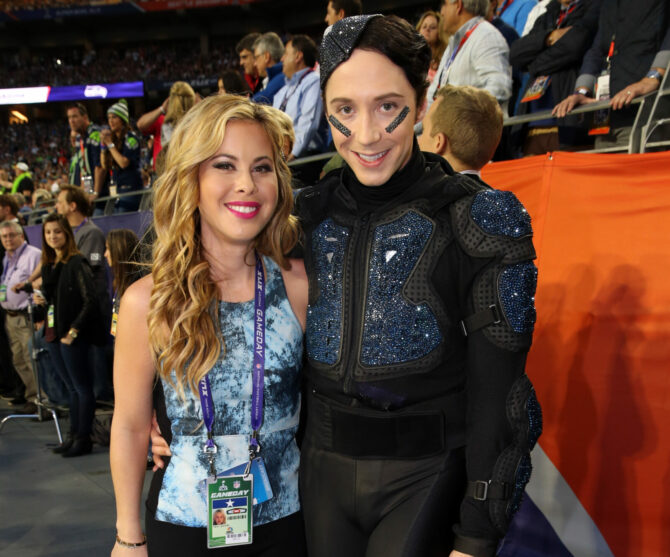 Johnny was asked by NBC to cover the Super Bowl pre-game show in 2015 (and again in 2017). This is not the Oscars, but the NFL, which doesn’t exactly embrace queerdom with open arms. Yet, in true sportsmanlike conduct, Johnny accepted the invitation and wore a football uniform covered in Swarovski crystals to show his support. 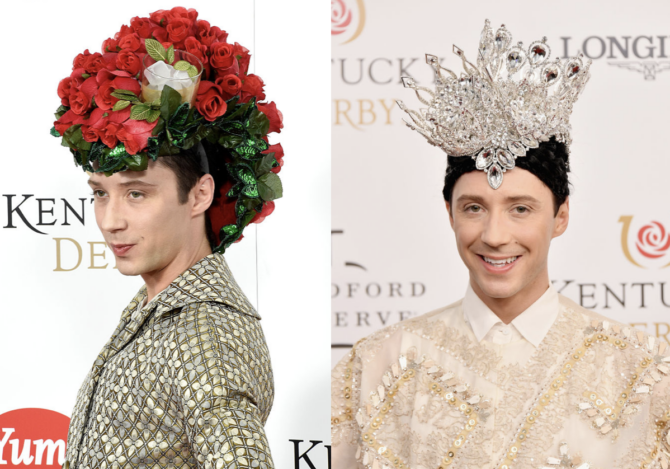 Johnny and Tara covered the red carpet of the Kentucky Derby from 2014 to 2018. The horse race is all about hats, which Johnny takes to mean elaborate headpiece worn in the shape of a mane. Red roses did the trick in 2015, and a triple crown (get it?) in 2018. Fun fact: Johnny was a competitive rider as a child, before trading the reins for ice skates. 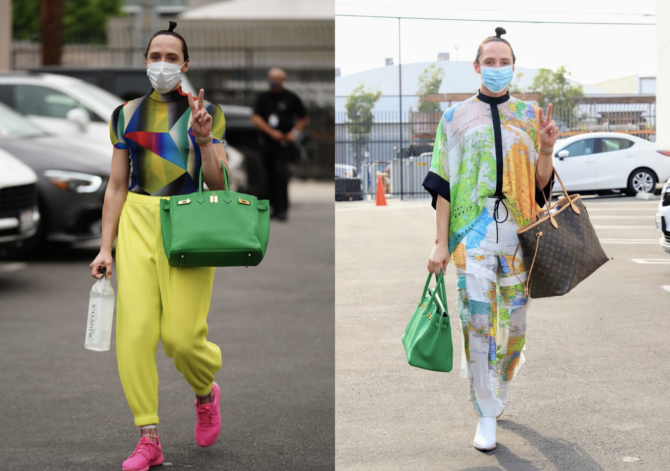 Oh, you paparazzi found me again! Yes, it’s me, Johnny Weir, heading into another day of rehearsal for Dancing With The Stars in Los Angeles. I made it to the semi-finals! What, this bag? Oh, it’s just my Hermès Birkin. I have one in every color!