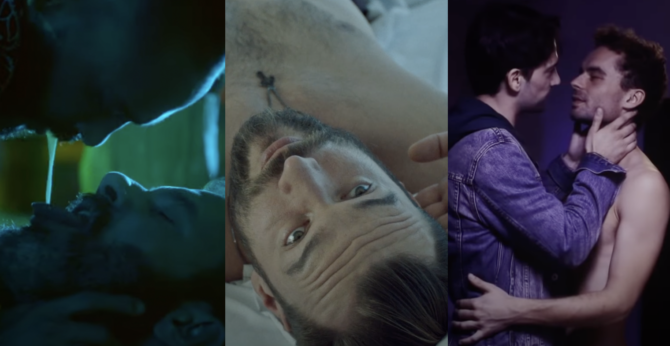 Want to spice up your next “Netflix and chill” night? Boy, we have the list for you! Gone are the days of staying up late at night, scrolling through IFC and HBO, hoping to catch a quick glimpse of a glorious gay sex scene. We now live in an age where we can stream that beautiful NC-17 smut on demand. While there are hundreds of these titles to choose from, only a few rise above the label “softcore.” If you want to watch something as meaningful as it is meaty, check out our recommendations below…

John Cameron Michael’s 2006 film Shortbus is a kinky voyeuristic delight. Not strictly limited to the G in LGBTQ, this film explores the depths of human sexuality inside a New York City fetish club. Fun fact: There’s so much nudity in Shortbus, it’s said that the film crew shot a few scenes naked in order to make the actors feel more comfortable.

Two strangers meet at a gay bar, and what should have been a drunken one-night stand turns into a weekend-long, unforgettable sexcapade. Though Weekend does not pretend to be an art house film, you should brace yourself for deep, introspective moments that punctuate its raw, carnal scenes.

If you ever hoped to see more of Gael Garcia Bernal’s birthday suit in Y tu mamá también, well honey I got news for you. Bad Education is the answer to your prayers. This 2004 Spanish language film, set in 1980s Madrid, focuses on the relationship between two childhood friends and lovers who reckon with their traumatic pasts as Catholic schoolboys. It received an NC-17 rating in the United States for its depiction of man-on-man sex, but the film is as much a criticism of non-secular education as it is eye candy. On top of that, it shines an unwavering spotlight on transgender identity politics, drag, and sexual assault. Not just for idle watching–the film is widely acclaimed as one of Pedro Almodóvar’s best works.

This story follows a shy, hunky bear, Sandro, who attempts to spice up his dull life with a series of explicit sexual encounters—both real and imagined. Set against a background of political unrest, Sandro is caught in a torrid love triangle between a younger co-worker and a motorcycle-riding stud straight out of a Tom of Finland drawing.

This biopic illustrates how Tom of Finland shaped the fantasies of an entire generation of gay men. It’s a great flick for those who want to learn a bit about queer history while also getting your jollies. ‘Nuff said.

This French Canadian drama shows a torrid love affair between two men squatting in an abandoned high rise in snowy Montreal. With a setup reminiscent of The Last Tango in Paris, it is the third in filmmaker Rodrigue Jean’s trilogy. The Acrobat continues the auteur’s exploration into sexuality and emotional intimacy, following Lost Song and Love in the Time of Civil War.

Based on a novel by the same name, Boy Culture portrays the relationships between a successful male escort and his two roommates through a series of steamy confessionals. This film may be a bit clumsy and campy, but lovable nonetheless.