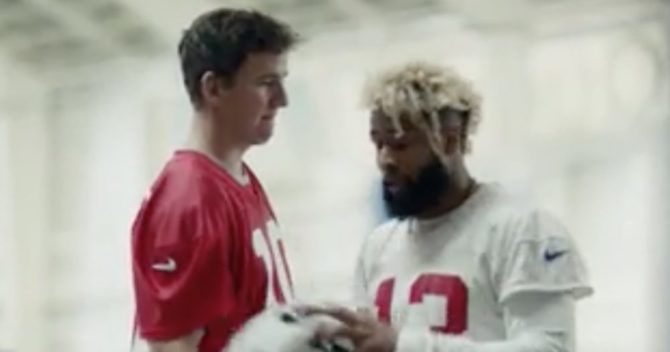 Explicitly LGBTQ moments have become a regular part of the Super Bowl broadcast in recent years, from Lady Gaga‘s inclusion of they lyric “No matter gay, straight, or bi / Lesbian, transgendered life” in her 2017 halftime show, to the ads. Lots of ads. Lots of gay-inclusive ads.

We anticipated another post this year collecting all the gay over-and-undertones, but in the end it was all fairly… straight.

There was one ad, though, that stood out from the pack as we sifted through material, panning for gay gold.

Homophobia in sports remains a huge cultural hurdle, from little leagues to the major leagues. So a little on-screen romance between two of football’s biggest stars, aimed at the broadest national audience there is, can go a long way.

Watch the ad below, and find out if they nail the lift at the end (they do):