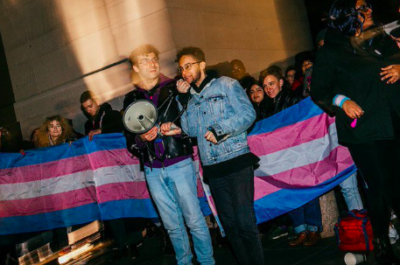 This week is Trans Visibility Week, and it couldn’t have come at a more important time.

Trans issues have gone from the margins of American political discourse to the mainstream, partly based on a string of ugly attacks from the Trump administration and a commensurate increase in hate crimes, violence and murder.

Incredibly, the administration released a memo defining gender by a person’s sex organs at birth, and to make it unchangeable and strictly defined for issues ranging from the use of public facilities to gender discrimination cases and healthcare.

Often, it seems like those speaking out against trans rights are much louder than those of us speaking up for the community.

Hopefully, you’re already following Janet Mock and Laverne Cox (if not, get on that right now), but here are 11 more trans people on twitter you should check out today.

Happy #NationalComingOutDay to all the truthseekers and truthsharers – past, present and future.

And happy #DayOfTheGirl for all of the trans girls thriving.? pic.twitter.com/ofevWnDHoU

Willis, a black trans woman, has been one of the best trans writers for years, and now as a National Organizer with the Trans Law Center, she’s become one of the leading voices in the trans community. Check out her Twitter not only to see her retweeting and commenting but also to see her tweet her own exceptional writing and speaking. If you want to keep up with the issues important to the Black trans millennials and beyond, Raquel Willis should be your first stop.

I do not think my body as a transgender woman is the biggest threat to the status quo; rather, it is my fire and power. #WontBeErased #TransPower #TransLiberation Now!

You may have heard Jennicet Gutiérrez’s name when she protested former President Barack Obama for the nation’s treatment of trans immigrants. Now under a completely more hostile, insidious administration, she’s redoubled the good fight for trans and immigrant equality. She tweets information and resources for trans and gender non-conforming folks in California and Los Angeles specifically, but also comments on national politics. In a time when trans people of color and immigrants are two of the most vulnerable populations in the US, Gutiérrez is an especially critical voice.

someone asked, “why would you bring kids to a rally?” for starters, trans kids want and deserve their damn human rights too — and it’s incredibly helpful for them to connect with and see trans adults fighting for their future. https://t.co/9VnzFyzSo5

Tyler Ford is a model, actor and performer, and works as a writer and deputy editor at the Conde Naste online magazine Them. Follow Tyler if you want to keep up with the best trans writing on the internet, informative and educational tools for how to fight against the current administration, not to mention cute selfies and photos. (Disclosure: I am a Them contributor.)

It's extremely concerning to hear this comment about why @victoriassecret would not cast a trans model. It speaks volumes about how certain people within the industry still view trans women.

Munroe Bergdorf is a black British trans woman and one of the most beautiful models on earth. She was at one time one of the faces of L’Oreal, and continues to appear in magazines and on television. She’s an intelligent critic of racism and white supremacy and continues to fight for trans people everywhere. Bergdorf’s not afraid to speak her mind about important trans issues in England and the States and not afraid to look absolutely stunning while doing it.

Everyone talks about how when people “get to know trans people” we win. And that is true in part. But what’s more true is: when people get to know themselves, trans or cis, we build power, dismantle fear and fuel collective care and resistance. Our stories are for us.

Strangio is an important figure in the fight. As an ACLU staff attorney, brings a legal background that informs the movement. He is a stellar advocate trans people in police custody, prison and other forms of government detention. When he’s not commenting on MSNBC, his Twitter is full of knowledge that he expertly shares.

It is incredibly dehumanizing to have your humanity turned into a political issue, and particularly a partisan football. I’m sending my love to everyone who is constantly receiving the message that hating and bullying you is popular. It never feels good.

Mark my words, Sarah McBride is going to be President of the United States one day. She’s an author, writer, speaker and political activist who works as national press secretary for the Human Rights Campaign. She also spoke at the DNC in 2016, and if you’re not already impressed enough her Twitter is full not only of insights but also uplifting words for all Americans. If you want to find hope in today’s intolerant political climate, follow Sarah McBride.

I’m praying for my sisters in Brazil. It’s alreasy the most dangerous place in the world for trans women, and now an extreme right wing president has been elected, one who has said he’d prefer a dead child to a gay one. These are dark times. We must shine brighter.

Jen Richards is a writer and actor and one of the creators of Her Story, an Emmy-nominated web series about trans women. She’s about to co-star in the new HBO series Mrs. Fletcher and you can follow her tweeting about trans representation in media and show business. For some of the best takes on pop culture, check out Jen Richards.

Given the health crisis of toxic masculinity & the dangerous rhetoric abt trans bodies on both sides of the Atlantic, I’m so honored & encouraged to be shortlisted for this award. En route to London for the ceremony now, excited to talk masculinity with my friends in the UK ?? https://t.co/u7qcYGrDyC

McBee is especially great deconstructing manhood and masculinity. His takes and tweets on masculinity don’t apply just to trans men or trans masc people–everyone can learn from his thoughts.

Eli Erlick is the director of Trans Student Education Resources, an organization that helps trans students. She’s also a writer and advocate who’s always challenging gender norms and questioning what it means to be a trans woman under the current gender binary. She’s a fashion and style icon, never afraid to speak up for what she knows is right, and she knows how to curate a twitter feed.

Julia Kaye is an award-winning cartoonist and animator from LA. The autobio parts of her webcomic, Up and Out, was turned into the comic book Super Late Bloomer, about her coming out and transition. If you want an approachable and cute, but still extremely educational, look into what it’s like being a trans woman and transitioning, there’s no better place than her twitter. If you know any young trans people who could use a positive trans role model, make sure they’re following Julia.

We won’t be erased but we will be elected.”
CO state Rep-elect Brianna Titone#TransformingPolitics pic.twitter.com/8RnDN6TzLP

Monica Roberts is a black trans woman who has been standing up for, writing about, and reporting on trans issues, culture and news for years. She’s a legend, and her Twitter is filled with the best, most up to date trans news. She’s also a great way to find out about other amazing trans folks to follow. Monica Roberts is one of the all-time greats in the trans community, please follow her right now.