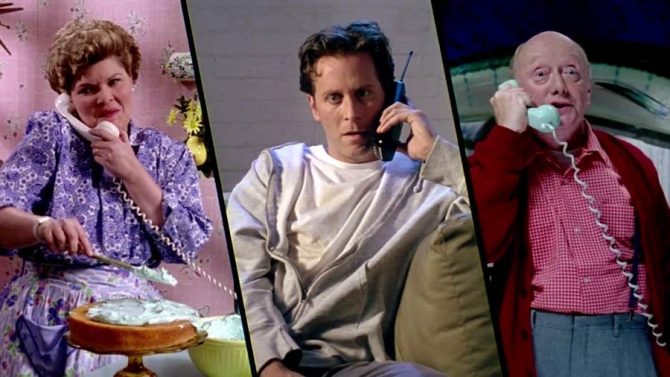 Ah, the ’90s. Many call it queer cinema’s Golden Age. It was a decade of profound change when it came to how audiences viewed LGBTQ people in film. Hollywood started depicting queer characters and stories, sometimes more successfully than others. Often this was done through comedies, since laughter tends to be the easiest way of connecting with people.

We’ve compiled a list of 13 queer comedies from the ’90s that you might be interested in revisiting while you’re stuck in quarantine. Some of these films have aged better than others. Almost all of them contain a gay stereotype (or five). And there are plenty of jokes that would never fly today. (Also, many of the actors in them don’t identify as LGBTQ.)

Still, it’s important not to separate these films from their time. It was the ’90s, after all, and people were still trying to figure out how to talk about queer issues. But at least they were trying. Also, without these movies helping to push LGBTQ characters into the mainstream consciousness, we wouldn’t have the infinitely better queer films that we have today, many of which feature actual queer people both in front of and behind the camera.

Jennifer Aniston and Paul Rudd star in this adaptation of gay writer Stephen McCauley’s bestselling novel about two roommates–one straight and one gay–whose relationship is complicated by an unplanned pregnancy. The film includes an A-list supporting cast, including Allison Janney, Alan Alda, and Nigel Hawthorne.

Kevin Kline plays a closeted high school drama teacher from Indiana who is outed by a Hollywood actor who thanks him during an award acceptance speech. Chaos ensues. At the time of its release, the film was widely noted for its 12-second kiss between Kevin Kline and Tom Selleck. It was also one of Hollywood’s first attempts at a big budget gay rom-com.

OK, OK, so this one isn’t gay, per se, but it’s still pretty damn queer. (It’s the Spice Girls, after all!) Made at the height of their fame, this musical comedy follows the five British pop stars, who all play themselves, as they prepare to perform a major concert at London’s Royal Albert Hall. It’s cheesy. It’s campy. It’s colorful. And it remains the highest-grossing movie of all time by a musical group.

Set in Sandusky, Ohio in 1984, this coming-of-age tale follows Eric, a naive 17-year-old teenager figuring out his identity at the same time gender-bending pop stars like Boy George and Annie Lennox are flaunting androgynous images. It also features an early career performance by Lea DeLaria, who plays Eric’s butch lesbian boss at the amusement park restaurant where he meets his first boyfriend.

The Adventures of Priscilla, Queen of the Desert (1994)

Two drag performers and a trans woman embark on a journey across the Australian Outback to perform a four-week stint at a cabaret in Alice Springs. To get there, they ride a tour bus named “Priscilla” and encounter an unforgettable cast of characters along the way. Need we say more?

While not explicitly gay, the protagonist is a sexually-curious young woman named Cher (pretty gay), who’s obsessed with fashion (also pretty gay), and who’s a terrible driver (also also pretty gay… kidding!). There are also tons of cute guys in the movie, lots of crass jokes, and some funny gay characters, albeit very stereotypical by today’s standards.

Steven Weber plays Jeffrey, a gay guy who becomes so disenchanted with sex that he takes a vow of celibacy. No sooner has he sworn off sex than he meets hunky, sensitive Steve. Passion ignites and hilarity ensues. The film features a strong supporting cast queer actors and icons, including Olympia Dukakis, Nathan Lane, Camryn Manheim, Sigourney Weaver, and Christine Baranski, just to name a few.

Christina Ricci stars as a pregnant, oversexed teenager who chain smokes cigarettes, steals dead people’s ashes, and sleeps with her brother’s boyfriend. Not all of the jokes have aged well (like Lisa Kudrow’s cringeworthy gag about bi guys), but the film still tackled issues that a lot of Hollywood still wouldn’t touch back then, including HIV/AIDS and the idea of sexual fluidity.

Another one that isn’t gay, per se, but it still spoke to an entire generation of queer teenagers. Not only is the film all about exploring taboo things, but Ryan Phillippe shows his butt, Josh Jackson has a gay sex scene, and Sarah Michelle Gellar and Selma Blair share that infamous strand of saliva kiss. Plus there’s the whole underlying theme of challenging the patriarchy and not subscribing to society’s expectations. And the soundtrack is pretty dope.

To Wong Foo Thanks for Everything, Julie Newmar (1995)

Wesley Snipes, Patrick Swayze, and John Leguizamo star as three New York City drag queens who travel cross-country until their car breaks down, leaving them stranded in a small town in the middle of nowhere. The film features cameos by RuPaul, Naomi Campbell, Candis Cayne, and Julie Newmar herself, to name a few.

We couldn’t put together a list of queer movies from the ’90s and not include this classic. If you haven’t seen it, you should. The film follows a flamboyant, middle-aged gay couple from South Beach whose straight son brings home his fiancé and her ultraconservative parents for the first time.

Related: 10 movies about male strippers to quench your thirst during quarantine