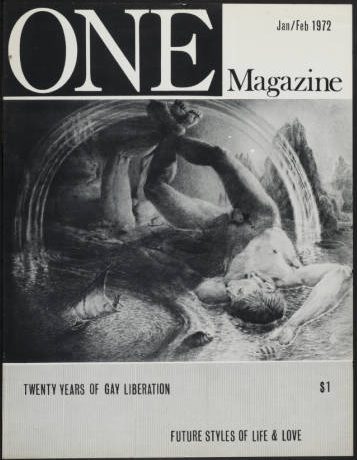 This is the ninth in our series of ONE magazine cover stories.

Read Gus Dyer’s long think piece describing where he imagined society was headed in 1972 and you might wonder if the writer had a crystal ball. In the early days of the birth control pill and with headlines touting a population explosion, Dyer made some astute predictions:

And that’s just the first page of this prescient essay. Dyer goes on to predict the emergence of serial monogamy, non-monogamy, and more communal styles of child-rearing. He doesn’t get everything right. For instance, he sees the fear of venereal disease as lessening in the coming decades, but to be fair, how could he have possibly predicted HIV? And while his vision of everyone freely buying and selling sex on the open market hasn’t transpired in exactly those terms, you could say that dating apps have ushered in a “market” just as free-flowing but based on bartering.

Perhaps most alluringly, Dyer sees how all this plays out in the field of civil rights and the Supreme Court:

The emergence of a new concept of constitutional democracy – with emphasis on interpretations which implement the protection of minority interests – is almost certain to liberalize marriage and family arrangements. This trend is possibly being accentuated – slowly, of course – through biological evolution which, as among rabbits and dogs, appears to be producing a wider range of variations, each with its own special interests. To the extent that the Supreme Court recognizes and appreciates this diversity of interests, its interpretations will be more liberal.

If he could see us now, we think he’d be satisfied at the progress we’ve made.