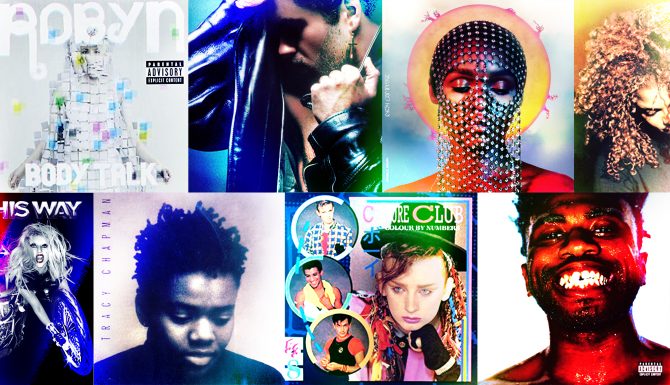 Music has always played an important role in creating visibility, bringing people together under one roof to shake their booties, and consoling the souls of the dispossessed.

From the flamboyant outfits of Bowie and Elton to the no-minced-words approach to lyrics from Janet and Gaga, the spirit of pride has echoed through pop culture.

As pride month heats up, we took upon the impossible task of rounding out the 20 most important albums to shape gay culture – an essential collection of blockbuster classics and subversive selections alike.

Often regarded as “the greatest night in show business history,” this two-part live recording won the Grammy for Album of the Year, making Garland the first woman to win the award. Rufus Wainwright paid homage to the legend by recreating the concert in its entirety at Carnegie Hall in 2006 (a project which he revisited in 2022 for Judy’s 100th).

Released three years before Elton publicly came out for the first time, this masterpiece is the icon’s most popular album to date, spawning massive hits like “Bennie and the Jets,” “Goodbye Yellow Brick Road” and “Saturday Night’s Alright for Fighting.”

Freddie Mercury and Co.’s high-drama magnum opus was completed a week before the band embarked on a tour to support it. The band only had four hours to shoot the music video for lead single “Bohemian Rhapsody” as they needed time to rehearse the setlist before touring.

Miss Ross’ best-selling album marked a change in her sound. After hearing Chic’s music in Studio 54, the diva enlisted Nile Rodgers and Bernard Edwards to help her create a more modern sound. Included on the album is “I’m Coming Out,” a track the pair was inspired to write after seeing a number of drag queens impersonating the singer.

The British new wave four piece’s sophomore album is the group’s personal favorite. During the group’s height, lead singer Boy George’s flamboyant costumes and sexual ambiguity were the focus of tabloid headlines. Dead or Alive lead singer Pete Burns later claimed he was the first to wear big hats and colorful outfits, to which George famously snapped back: “It’s not who did it first, it’s who did it better.”

The icon’s debut solo effort won a Grammy for Album of the Year and birthed a string of hit singles, including four number ones: “Faith”, “Father Figure”, “One More Try” and “Monkey.”

Several sources close to the star, including her ex-husband and her longtime agent, have confirmed that Whitney had a lesbian romance with her BFF, Robyn Crawford. Whether or not the claims are accurate (Crawford will “set the record straight” in a memoir due November 2019), it’s safe to say that Houston’s catalog is cherished. In fact, two tracks from her sophomore album played pivotal roles in recent queer entertainment: RuPaul’s Drag Race star Sasha Velour went on to snatch the season 10 crown following a jaw-dropping lip sync to “So Emotional” and Pose’s Jamal (played by Ryan Jamaal Swain) won hearts during a dance school audition to the icon’s mega-hit “I Wanna Dance with Somebody.”

Chapman is a private person and, as such, has never gone on record about her sexuality – but her androgynous style and coffee shop soundtrack appeal have made her a lesbian icon of sorts. Tracy’s politically-charged debut is one of the best-selling albums of all-time, with over 20 million copies sold worldwide.

Cher has spent an illustrious career in pop reinventing herself to the adoration of the gays, and possibly never moreso than in her twenty-second studio album, Believe. This album’s smash-hit title track was one of the first popular tracks to use auto-tune, which opened a sonic Pandora’s box unto the gay music scene forever.

The lesbian folk pair, comprised of Amy Ray and Emily Saliers, is known to write their songs separately. Their most popular track, the introspective “Closer to Fine,” was penned by Saliers. Stars including Lisa Loeb, Bonnie Raitt, and Brandi Carlile have taken turns joining the duo to sing the song’s booze-soaked third verse at live shows.

It would be difficult to find an ally more committed to rights than this tireless warrior – and given that she is the Queen of Pop, it would be unfair to whittle down her musical contributions to just one era. It even feels sacrilegious to only include this 17-track capsule of her best ’80s moments when she followed it with masterpieces like Ray of Light, Erotica and Confessions on the Dancefloor. But given its benchmark as the best-selling compilation album by a solo artist, The Immaculate Collection is a must for any gold star gay’s record collection.

It was widely believed that the singer-songwriter used her album title Yes I Am to confirm rumors that she was a lesbian, but that’s folklore. She had actually written a song with the title for her previous album: “I thought it would be a great song to name an album after. Then, I realized when I came out right before the album came out … ‘Oh, that is going to be interesting. That is going to be really interesting.’”

The icon’s sixth studio album was so explicit in its exploration of queer themes that it was banned in Singapore. On “Free Xone,” she sings of gay and lesbian couples who are “free to be who you really are” and her mega-hit “Together Again” recalls a friend who died of complications related to AIDS. Some tracks even had listeners questioning Jackson’s sexuality: on “Speakerphone,” she has phone sex with a lady friend and her take on Rod Stewart’s “Tonight’s the Night,” in which she doesn’t change the song subject’s gender, suggests losing her virginity to another woman. She shrugged off the rumors, stating, “Am I curious? I think every girl has wondered, more so than a guy. A girl can go there. But I never have.”

Between her delectable dance-pop beats and androgynous appeal, the Swedish pop star won over a cult following with this album. A decade later, the record’s biggest triumphs, “Call Your Girlfriend” and “Dancing On My Own,” are still in regular rotation at gay bars.

Mother Monster solidified her status as a gay icon with this album. While empowering tracks like Katy Perry’s “Firework,” Kesha’s “We R Who We R” and P!nk’s “Raise Your Glass” ruled the charts at the time, Gaga didn’t mince word about the audience the album’s titular anthem was intended for, singing, “No matter gay, straight, or bi / Lesbian, transgendered life / I’m on the right track, baby / I was born this way.”

While his sophomore output Bloom gained more commercial success, it’s his enchanting debut that deserves a spot in every queer person’s catalog. From the euphoric anthem “Youth” to the restrained, seductive “Bite,” Blue Neighbourhood is brimming with bops. But it’s the album’s pinnacle, “Heaven,” that cements it as a classic, with lyrics that explore the inner turmoil of queer people with religious roots: “Without losing a piece of me, how do I get to heaven?” the singer questions.

After finding out that she scored a Grammy nom for Album of the Year in real time, Janelle teared up explaining the record’s purpose: “It’s not about me, it’s about a community of dirty computers, of marginalized voices. Being a young black queer woman in America, there was something I had to say. And there was a group of people that I wanted to celebrate and I’m happy to be representing them. I hope they feel seen, I hope they feel heard, I hope they feel loved and I hope they feel celebrated.”

With the marriage of harsh noise sounds and beautiful melodic vocals, trans musician SOPHIE carved out her space as a hyperpop pioneer. The sonically opposed elements of her work and the innovation with which she mended them made this album into something of a benchmark piece in modern electronic music. Sadly, Oil was the sole studio album before SOPHIE’s untimely passing in early 2021.

As hip-hop becomes more inclusive, queer rappers like Mykki Blanco, ILoveMakonnen and Young M.A. are gaining more attention. Rap collective Brockhampton shot to number one on the Billboard album chart with their major label debut, Iridescence, last year and the group’s de facto frontman followed it with this 11-song collection. Abstract doesn’t shy away from his sexuality on the album; in fact, the opening track “Big Wheels” sees the rapper laughing off claims that he’s queer-baiting and declaring he’s a power bottom.

After coming out at the height of his meteoric “Old Town Road” rise to fame, Lil Nas X went full pedal to the metal with his explicit queerness throughout the entire Montero era. From the salaciously sinful “Call Me By Your Name” video to tongue-kissing men in his live performances, oppositions to Lil Nas X’s queer expression have only ever seemed to spur him on further.