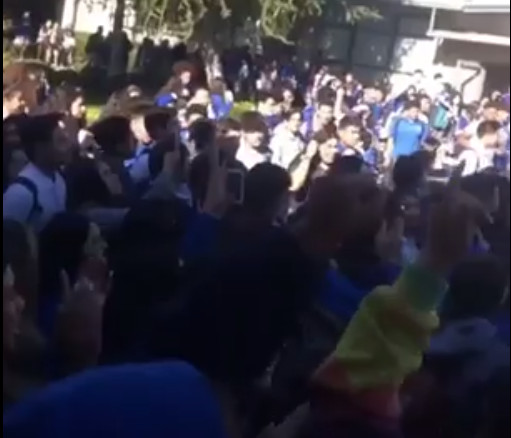 200 students at Bishop Amat Memorial High School in La Puente, CA staged a walkout in support of a lesbian classmate last week. The school administration had threatened to out the woman to her family.

Senior student Magali Rodriguez claims staff at Bishop Amat mistreated the queer student and her and her girlfriend for three years. School officials banned the pair from sitting together during lunch, showing any form of affection to one another, and made both girls attend mandatory counseling and disciplinary sessions.

Rodriguez eventually decided to come out to her parents, who were appalled at the treatment her daughter endured. When the student body caught wind of Rodriguez’s ordeal, they staged a walkout in support.

“I decided to walk out because I wanted to take a stand,” one student told BuzzFeed News. “I didn’t agree with what the administration did with the situation. I feel like it was a good idea for the student body to stand as one to show our support for Magali.”

Since the walkout last week, school officials have scrambled to do damage control. In a statement released by the school, officials claim Bishop Amat “is committed to providing a supportive and inclusive learning environment for all students, irrespective of their sexual orientation.” The statement then goes on to add the reductive caveat that students are also “held to the same policies and procedures in compliance with the accepted teachings of the Catholic Church.”