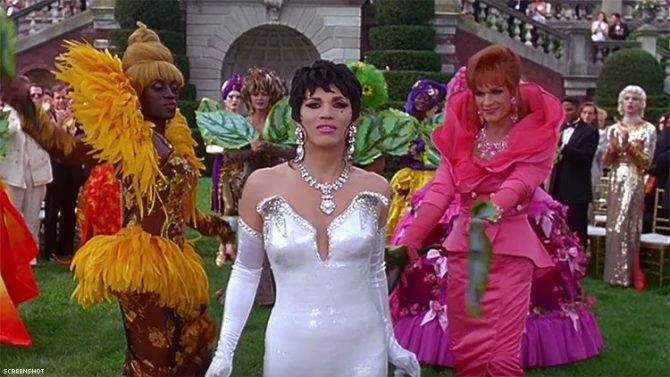 Actor John Leguizamo, known for his roles in When They See Us, the Ice Age film series and Moulin Rouge! has just opened up about his life-changing experience making one of his most notorious films: To Wong Foo, Thanks for Everything, Julie Newmar. The film cast Leguizamo Chi-Chi Rodriguez, part of a trifecta of drag queens, opposite Wesley Snipes and Patrick Swayze.

Speaking on the 25th Anniversary of To Wong Foo‘s release, Leguizamo reveals how the film broke new ground for mainstream, Hollywood cinema, and altered the trajectory of his career.

“It was a groundbreaking movie in so many ways,” he tells Yahoo Entertainment. “There have always been actors playing women’s roles, but this time we were playing gay roles and giving them dignity and respect. That was huge. Especially with these action stars, Wesley and Patrick. We knew we were on a mission and we wanted to do it right. That was a beautiful time…because of the respect for the LGBTQ community.”

Related: These four gay cult classics are making a comeback just in time for Pride

Despite the euphoria from playing a groundbreaking character, Leguizamo also confirms a long-standing rumor: he and Swayze almost got into a fistfight on set.

“I had something to prove,” Leguizamo confesses. “Patrick didn’t. So I was ad-libbing. And he was tired. And he said, ‘Are you going to do that again?’ And I said, ‘Yeah, you know how the routine is.’ He goes, ‘Why don’t you shut up?’ I said, ‘Why don’t you make me?’ And Wesley was like, I got your back. So we were about to fight, but we took a look at ourselves wearing hot pants, wearing pumps. It was ridiculous. We hugged and we made up.”

Leguizamo went on to score a Golden Globe nomination for his performance in To Wong Foo. The success of the film also helped him land high-profile parts in Romeo + Juliet as well as Moulin Rogue!. Still, the greatest legacy of Chi-Chi, according to Leguizamo, is the way that his character became an icon for queer people, especially within the drag community.

“My character, Chi-Chi Rodriguez became a teen icon for LGBT teenagers,” he says. “I got many letters from kids telling me that they felt safe to come out to their parents because of my character. They saw themselves in me, and I’ve always cherished that.”