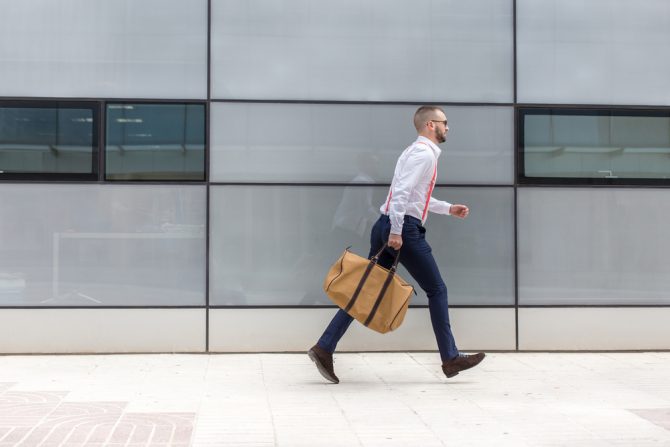 OK, OK, maybe it’s not a scientific fact, but it’s definitely a #fact.

Earlier this year, a petition was launched in the U.K. asking parliament to consider installing “gay walking lanes” specifically for queer people who, for whatever reason, are always in a hurry. 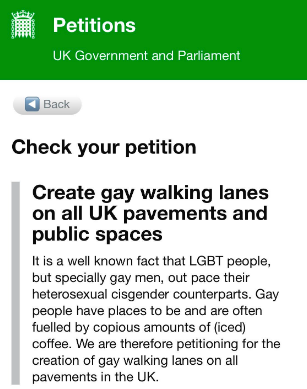 In June 2019 interview with GQ , psychologist Ian MacRae hypothesized that the correlation between homosexuality and walking fast had to do with a variety of factors all working in tandem.

“The fastest walkers are men, younger people, and people who live in urban areas,” MacRae said. “So already younger men in cities are the fastest walkers–perhaps gays just have an edge on that?”

Honestly, we’re not sure why gay people walk so fast. And when paired with the fact that we’re also always late to everything, the phenomenon becomes even more mysterious.

Person: Hey, can you slow down? You're walking a little fast for me
Me, gay: I'm sorry, no, I physically cannot

anxiety being gay
?
walking too fast

Gay Pride is being in a boot and still walking twice as fast as other people in the hallway.

Gays walk fast until they practice their internalized homophobia at crosswalks. Move bitch I got brunch.

i read on here that gays walk fast for no reason and ever since then i’ve realized how many people i pass when walking to my destinations. straight people walk SO slow omg.

We all know there are three things all gays love: walking fast, iced coffee, and nuclear fission

My dad The gays
?
walking fast

Gay culture is walking super fast along the edge of the sidewalk because you're never too out to feel guilty about occupying space!

gays on their way to class walking fast for no reason pic.twitter.com/OrOvlWR2HL

yes I am gay
I drink iced coffee
I walk real fast
and I want to date my twin!

walking so fast my phone thought I was driving…gay things

Do gays walk fast? Or do straights walk slow? That is the question. (Definitely the latter).

Google Maps: It will take 17 minutes to walk to your destination.

Straight people, look behind you, chances are there's a gay person trying to get past because you're moving at an extremely glacial pace

It used to be cool to be a smart gay who could flay people with insults about theory and rigorous historical knowledge, but now being gay is just like using Instagram and walking fast.

Overheard at a coffee shop: “the gays will live forever because they walk so fast”

this is why gays be walking so fast all the time pic.twitter.com/eNJ1zRZthl

I walk so fast (gay) normally that my Apple Watch doesn’t even recognise I’m walking when walking with slow (straight) walkers ???

Gays walk fast because they learned to walk to the beat of Womanizer by Britney Spears. pic.twitter.com/jC1k6BRXSA

We all know the thing about gay men walking fast, but are we also all speediest at using cash machines? I demand someone commissions a study.

Ay any university wanna throw me an honorary degree in the things I do best??

They are:
-Telling twenty stories to get to one point.
-Walking fast to gay house music.
-Oral
-Staring at stuff in my apartment and imagining being productive.
-Drinking cocktails alone.

Related: 30 tweets about gays and iced coffee that are absolutely 100% accurate