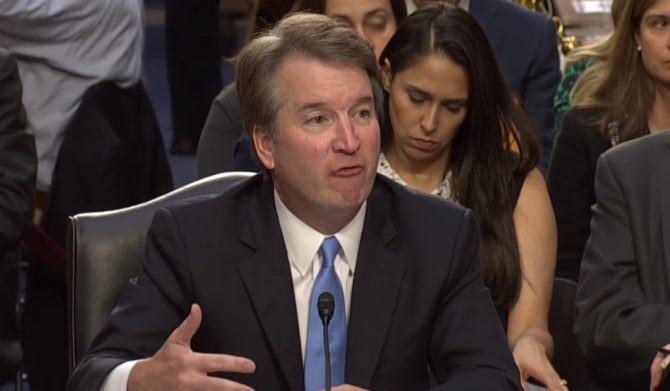 And while many folks are upset that our country’s highest court now includes an accused sexual assaulter who lied under oath to the Senate, in a recent Savage Love podcast, longtime sex advice columnist and gay rights activist Dan Savage said that Kavanaugh’s appointment might actually have an upside: It gives Democrats the opportunity to impeach him if they win back the House and Senate.

But while that sounds great, even he admits that it’s a long shot. Here’s how that would work:

1. New Bush-era revelations when Kavanaugh worked as a political hack

During the hearings, Republicans prevented the release of literally hundreds of thousands of documents detailing Kavanaugh’s work as an associate counsel and staff secretary under anti-gay former U.S. President George W. Bush. It’s likely those documents will continue to leak out and go public in the weeks ahead, revealing unsavory details about his past work as a GOP propagandist, the furthest thing from a job requiring fair and unbiased thinking.

Here’s the rub: It seems increasingly unlikely that Democrats will be able to re-take the Senate. And even if they do, it’s nearly impossible that Democrats will win enough seats in the Senate to command the 67 votes needed to impeach him. But if they find enough damning evidence against Kavanaugh in a more thorough investigation of his alleged sexual assaults (rather than the cursory) FBI investigation in which Kavanaugh, his key accuser, and other witnesses weren’t even questioned) and the Bush documents reveal grievous misdeed, Dems could engineer a public campaign to shame Senate Republicans into voting to impeach him.

But even this too is unlikely. The only U.S. Supreme Court judge ever to be impeached was Samuel Chase in the early 1800s, and even he wasn’t removed from the bench (because while the House impeached him, the Senate acquitted him). Also, Republicans see Kavanaugh as their hope of maintaining a conservative court majority and rolling back LGBTQ rights, abortion, immigration, voting, environmental issues and more. So they’re likely to back their golden boy, no matter how dirty he gets or how blue the Senate becomes.

While this is a bummer, all hope isn’t lost. Some progressives — hopeful of a 2020 blue sweep of the Senate, House, and presidency — have floated the idea of expanding the size of the court to more than its current 11 Justices in an attempt to water-down its conservative-bent. Of course, this could lead to a back and forth, with each party expanding or contracting the court to suit their ideological needs rather than justice. Another more conservative idea is to impose term limits on Supreme Court Justices, turning their lifelong reigns into shorter terms.

Either way, it seems like we’re stuck with Kavanaugh for now. But if progressive Dems ever regain power, they at least have some options available to keep him from wrecking the court for the next few decades.

4. Kavanaugh could chill out and become moderate

During his Senate sexual assault hearing, Kavanaugh railed about how the accusations against him were the result “revenge on behalf of the Clintons.” This claim and his past rulings make him seem pretty far-right on the ideological spectrum.

But it’s entirely possible that Kavanaugh could catch the fairness bug and end up making some progressive rulings anyway. For example, John Roberts, the Justice seated by George W. Bush, ended up being a key vote in the 2012 that upheld key parts of Obama’s Affordable Care Act.

Similarly, recently retired Justice Anthony Kennedy — seated by Ronald Reagan (who himself was no friend to the gays) — ended up being a good key vote on issues involving same-sex marriage and gay rights. So while many of us are expecting the worst with Kavanaugh, he could end up surprising us. Here’s hoping.