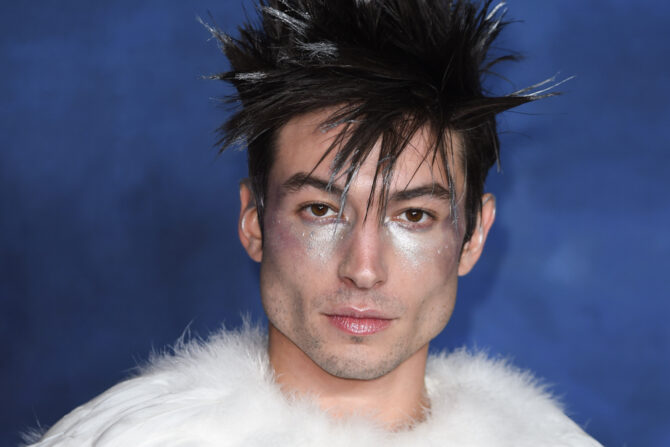 Though Miller has become well-known for appearing in the Fantastic Beasts and DC’s superhero film series, their career has been punctuated with several notable highlights and lowlights. Here are five of the actor’s most noteworthy moments throughout their unapologetically queer career:

Miller initially came out in a 2012 interview, after wowing audiences by playing a gay teen in The Perks of Being a Wallflower and a disturbed teenager in We Need to Talk About Kevin.

“I’m queer,” they said in the interview. “I have a lot of really wonderful friends who are of very different sexes and genders. I am very much in love with no one in particular. I’ve been trying to figure out relationships, you know?”

Their coming out was all the more momentous when they became the first out actor to portray a superhero on the big screen. They played the The Flash alongside other iconic heroes in Batman v Superman: Dawn of Justice, Suicide Squad and Justice League.

At San Diego Comic-Con, the then-24-year-old actor was captured by TMZ smooching a male fan.

The fan had asked Miller if their superhero character The Flash could get drunk, seeing as their supersonic metabolism would likely process alcohol quickly out of their body. When Miller said it was unlikely, the fan suggestively asked if they could smell Miller’s breath to make sure they hadn’t been drinking. Miller then shared a kiss with the fan as proof of their super-heroic sobriety.

While the moment might’ve seemed like a harmless bit of cheeky fun, it’s rare for queer actors to ever kiss their fans, let alone in well-attended and widely covered conventions.

In an interview with Playboy magazine, Miller revealed that they were part of a polyamorous group of sexual partners called a polycule (it rhymes with “molecule”).

Miller said the polycule was made of “queer beings who understand me as a queer being off the bat.” They said they felt a strong familial and marital connection to its members and that everyone in the group loved each other very much.

In sharing this, Miller demonstrated that romance, dating and sex don’t have to look like what monogamy or pop culture show us.

April 2020 – Miller appears to choke a woman in public

A video of Miller taken at a bar in Reykjavik, Iceland appeared to show Miller choking a female bar patron.

The seven-second video didn’t include enough context to fully understand what occurred. The woman appeared to laugh and smile before Miller grabbed her. However, Variety reported that Miller had been “frustrated and angry” at the time.

Though the video went viral on social media, the bar’s employees reportedly escorted Miller from the premises, and police weren’t called to the scene.

January 2022 – Miller tells the Ku Klux Klan to kill themselves

Miller posted an Instagram video addressed to a North Carolina chapter of the Ku Klux Klan, the long-historied racist terrorist organization, telling its members to kill themselves.

“This is Ezra Miller — a.k.a. the Bengal Ghouls, the Mad Goose Wizard — and, um, this is a message for the Beulaville chapter of the North Carolina Ku Klux Klan,” Miller said in the video. “Hello. First of all, how are you all doing? Um, it’s me. Look, if y’all want to die, I suggest just killing yourselves with your own guns, okay? Otherwise, keep doing exactly what you’re doing right now — and you know what I am talking about — and then, you know, we’ll do it for you if that’s what you want.”

Miller wrote that the video was “not a joke,” adding, “Even though I do recognize myself to be a clown please trust me and take this seriously. Let’s save some live now ok babies?”