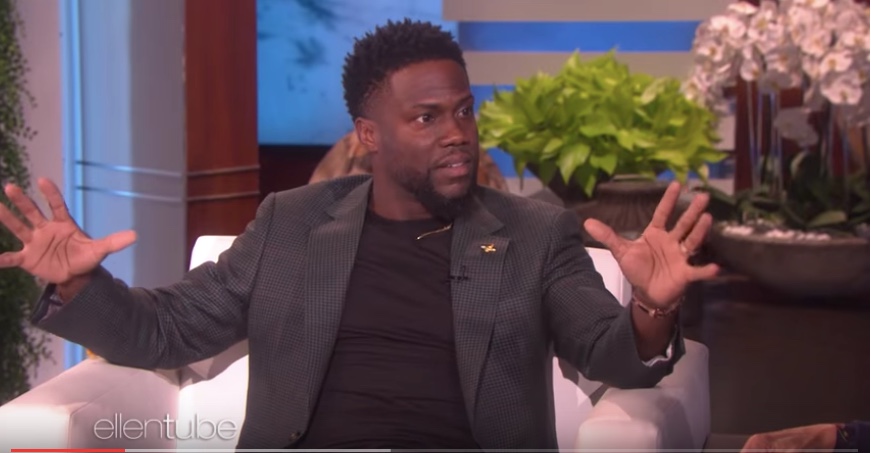 Following the assault of Jussie Smollett, Twitter reacted with derision to well-wishes from Ellen DeGeneres and Kevin Hart, mostly because DeGeneres helped give Hart cover following public outrage over his past homophobic lines, including one in which he said he’d physically abuse his kid to stop him from being gay.

Their well-wishes have an offputting tone because in the “interview” DeGeneres basically characterized Hart’s critics as “haters” and Hart offered a “sorry if you were offended” non-apology accompanied by blaming the gay community for unearthing his homophobic tweets, to begin with.

It was especially painful watching Ellen absolve Kevin because we love Ellen and want to love Kevin: She’s a longtime equality champion, a role model and our direct line to middle America. Her disarming, kind-hearted sense of humour makes her an effective advocate. Hart is insanely talented and could change the world for the better if he wanted.

Sending prayers your way @jussiesmollett ….This is unbelievably sad. Why are we going backwards….this is disgusting. We as people have to do better. WTF is going on the world???? Why… https://t.co/G6vCnKPEhf

Four years ago, @JussieSmollett came out on my show. I’m sending him and his family so much love today. ??

Many blasted the duo for the unearned love-fest, leaving most wonder why DeGeneres would essentially serve as Hart’s publicist/apologist. Who appointed her to that post? It wasn’t just that she used her gay celeb cred to forgive him for his refusal not just to apologize fully. She also didn’t even bother to ask him to take responsibility for what he did. Apologies don’t mean much without action, and Hart hasn’t actually done anything substantial to make up for his past hateful comments.

Really inserting your show here? It’s just sad. What about the guy who joked about beating his kid if they were gay that you forgave for all of us? Jokes like that make this type of violence possible. You’re part of the problem Ellen

So, as a black comedian who joked about beating a kid for being gay and a gay talk show host for forgave him for it without him actually atoning for it, their “prayers” and “love” come off as equally showy and insubstantial. But it didn’t have to be this way. Their conversation could have made real in-roads to help make their comments today land with grace and gravity.

Forgiveness is a good thing, of course. But DeGeneres forgave Hart without first establishing that he actually realized the gravity of what he’d said, sometimes resorting to putting words in his mouth that he could not master himself.

Related: Ellen and Kevin Hart are getting torn apart on Twitter for Jussie Smollett Tweets

“I think it’s perfect that all of this has happened because there has to be conservation about homophobia,” he announced on Hart’s behalf. “And whoever’s trying to hurt you, it brought up you reminding people that you’re a bigger person, that you’ve already apologized — you’re apologizing again.”

As Hart nodded, Ellen continued: “As a gay person … I’m sensitive to all of that and I’ve talked to you about [homophobia] and you’ve already expressed that it’s only not being educated on the subject, not realizing how dangerous those words are, not realizing how many kids are killed for being gay or beaten up every day. You have grown. You have apologized. You’re apologizing again right now. You’ve done it. Don’t let those people win — host the Oscars.”

DeGeneres, perhaps more than any other gay celebrity, understands the consequence of homophobia. She came out in Time magazine on April 14, 1997, and again on her TV sitcom 16 days later. When ABC cancelled her show later that season, she blamed it on her coming out and not the ratings.

Out magazine said that DeGeneres didn’t deserve to forgive Hart because as a popular black entertainer his words impacted queers of color most. The Huffington Post called it “Artificial Talk-Show Culture At Its Worst.” And an Advocate headline said it all: Ellen DeGeneres Does Not Speak for the LGBTQ Community on Kevin Hart.

At any rate, the backlash to DeGeneres and Hart’s well-wishes to Smollett got us to thinking about things we wish DeGeneres had actually discussed with Hart — conversations that might’ve shed more light on homophobia and everyone’s role in it. We can’t really ask Ellen to be a journalist, that’s not her gig, but that doesn’t mean she can’t ask some hard questions.

Instead of piling on, here are five things we wish DeGeneres had talked with Hart about instead, questions that would have forced him to grapple with homophobia, especially targeting the black queer community, rather than elude responsibility.

1. What do you think is the cause of the spike in hate crimes?

Hate crimes have been increasing since 2016, and bullying remains a perennial problem among youth. Familial queerphobia contributes to 40% of the homelessness among youth.

Hart and DeGeneres’ middle American viewers might not know these facts, and they help contextualize why advocates responded so strongly to Hart’s casual use of anti-gay slurs and physical threats. In a 2011 tweet, Hart wrote, “Yo if my son comes home & try’s 2 play with my daughter’s doll house I’m going 2 break it over his head & say n my voice ‘stop that’s gay.'”

It would’ve been telling to see whether Hart expressed empathy or merely shrugged off the stats as unfortunate. It also would’ve been awesome to know whether he felt he could affect change in this area — and it still would be!

Understanding the connection between homophobia and violence would help demonstrate that Hart gets it and it would make his well-wishes to Smollett feel more substantial and affirming.

2. Why it would be wrong to apologize more than once for the things you’ve said?

Perhaps the biggest letdown from Hart during his interview was his explanation that he didn’t want to apologize for his past comments because he’d already done so in the past, and the way Ellen let this slide. (By the way, Vulture investigated his claim and found no such apology anywhere.)

DeGeneres could’ve helped Hart see the foolishness of digging his heels in: It doesn’t take that much courage to sincerely apologize without qualifications, blaming others or self-recrimination, and it does so much to heal others–not to mention yourself. In fact, why not going on an entire apology/listening tour? It’s certainly been done before.

This question would’ve cut to the quick of Hart’s refusal and perhaps helped him see that anything worth saying once is worth repeating, especially if those most affected didn’t hear you the first time. It might’ve also served as a good example for future celebs who get caught making careless homophobic jibes and how they can respond compassionately to victims of homophobic violence.

3. What do you think about Billy Porter’s comments about you?

Porter tweeted that this isn’t about Hart’s right to tell “jokes,” but rather about his inability to understand the comparison between homophobia and the injustice of racism.

DeGeneres might have hesitated to ask Hart about Porter’s quote, both because Porter said “F you” and because celebrity beefs just aren’t on-brand for her.

Yet there must have been a way to bring this up. It would’ve been nice to see if Hart understands the similarity between black and gay Americans who’re both fighting for equality and against violence and discrimination. The black queer community literally embodies this fight. Which group is the most victimized in the country right now? Black trans women, who are subjected to violence and harassment at an alarming rate.

Here’s an idea, Kevin and Ellen. Sit down the quietly decent and courageous basketball star Reggie Bullock, who tattooed the likeness of trans sister, Mia Henderson, who was murdered 2014. Bullock, who is straight and African-American, could tell you everything you need to know about the intersection of racial and gender bigotries that killed his sister and devastated his own family.

This conversation would’ve brilliantly set the stage for both to address the racist, queerphobic attack on Smollett while making space for other black celebrities to weigh in on how homophobia intersects with race.

4. How would you have liked the community to handle this?

Hart initially told people complaining about his past comments to “Stop looking for reasons to be negative.” Then, during his DeGeneres interview, talked as if there were a vast conspiracy to destroy his entire professional career. Right.

But considering that GLAAD said it reached out to Hart to start a conversation, we’re curious: How would he have preferred this entire thing to be handled?

This isn’t a mere “gotcha” question: It could shed light on ways a possible ally would like to be handled — useful information for the next time a celeb gets caught making awful comments or “jokes.”

5. What could you do concretely as a popular public figure to make a difference?

Most recently, Hart told listeners of his Sirius XM radio show that it’s not his “life’s dream” to be an LGBTQ ally. That’s fine, actually. No one expected Hart to marshal a Pride parade or become executive director of the Human Rights Campaign.

But a donation, a PSA or a little time working with youth could’ve made for great press and a learning opportunity for why words matter. In fact, it’d be great to see him make a contribution, especially in light of Smollett’s attack. Giving his time and/or money to an anti-violence organization would show that he “gets it” and wants to make a positive impact if even just as a one-time thing.

A great alternate question could’ve been about what Hart might’ve said at the Oscars to address the issue. It’s an opportunity he’ll likely never get. But telling us how he could’ve used the opportunity would show us he cares about people less fortunate than he while reminding the world of his talent as a showman.

All of these conversations would’ve helped DeGeneres give Hart an opportunity to upright his public image and start dialogue in the right direction. For both entertainers, it’s not too late to still have these conversations, especially in light of Smollett’s assault.