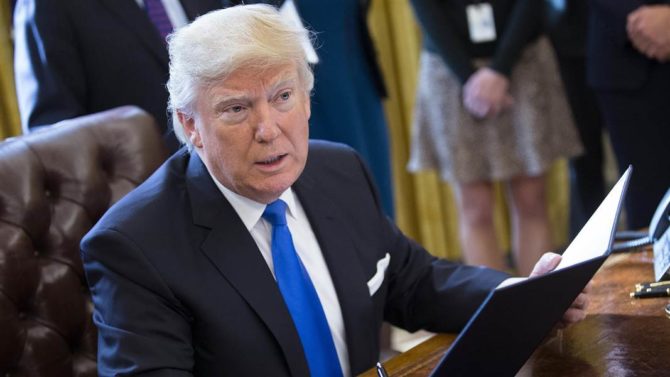 So Donald Trump has finally signed the religious liberty order that he supposedly put the kibbosh on in February. As it turns out, Trump merely postponed the order, waiting for National Day of Prayer to issue the love letter to the religious right.

The new order is not the same as the original one. It doesn’t call for religious-based exemptions from discrimination laws for everything, but only for Obamacare requirements.. What the new order does do is give the green light for churches to engage in politicking without any fear of violating IRS regulations. In short, it’s pretty bad.

Here are five reasons why Trump’s new order is even worse than anyone might have expected.

1. It enshrines religious liberty is a core value of the Administration

The order doesn’t specifically allow religious groups to discriminate against gay people. But what it does do is state that “it is the policy of the administration to protect and vigorously promote religious liberty.” Trump hardly cares about policy. But his appointees do. And the order sends a signal to the religious right’s henchmen in the Trump administration to do their best to erode protections. Don’t think they won’t apply themselves to that task gleefully.

2. The religious right can be even more involved in politics

Are you a megachurch pastor who wants your church to campaign for the antigay candidate of your choice? Now you can. Trump has eliminated the tax code restraints that have kept religious institutions from engaging in full-on political activity. If you thought things were bad before, just wait. The religious right doesn’t even have to try to hide its political activity behind advocacy groups any more. Its leaders can engage in electioneering right from the pulpit.

3. Forget about the moderating influences

First Daughter Ivanka and her husband Jared Kushner were quick to take credit for quashing the original religious liberty bill. Apparently, it’s back to being complicit. No one bothered to restrain Trump this time around.

4. Mike Pence is in the ascendant

The executive order is just the kind of thing that Mike Pence would have been happy to sign when he was governor of Indiana. Wait, he did!  Pence has been staying above all the infighting in the White House, which clearly is paying off in increased influence with the boss.

Related: This homophobic senator is being epically trolled by men wearing tutus

5. The religious right is now Trump’s primary base

First it was Neil Gorsuch (who will likely be the deciding vote in favor of religious liberty when it finally makes its way to the Supreme Court). Now it’s religious liberty and a license to be as political as you want. Trump has managed to irritate virtually every other element of the Republican party, but he has made the religious right very, very happy. He’s catering to their whims in ways that they could only have dreamed about. By empowering them, Trump is increasing their political clout so that, even if he’s a one-term president, they will still be going strong.

Related: Forget Trump’s 100 days. Look at what his henchmen are doing to screw us.