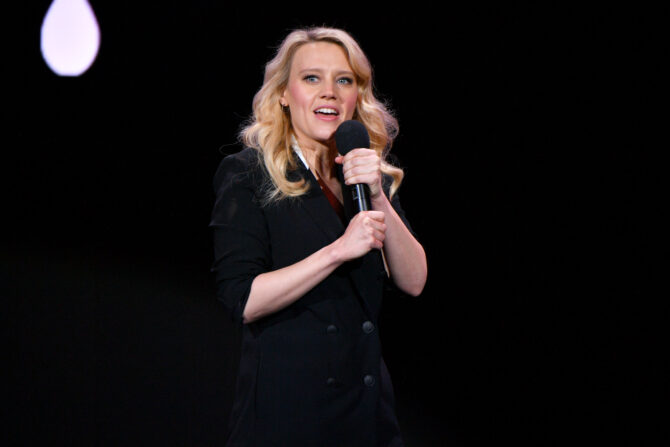 During Saturday Night Live‘s 47th season finale last weekend, the sketch comedy stalwart offered up a fitting farewell to Kate McKinnon, one of its senior-most repertory players and—for the better part of the last decade—the heart of the show.

A welcome reprisal of McKinnon’s Colleen Rafferty character, the cold open once again saw the brusque alien encounter-survivor share stories from her extraterrestrial experiences, which were somehow way more traumatic and strange than anyone else’s.

At the sketch’s conclusion, she agrees to go live with the aliens permanently, saying her goodbyes: “Well, Earth, I love ya! Thanks for letting me stay a while.” Through tears, McKinnon turned to camera to issue one final “Live from New York, it’s Saturday night.”

Weird, warm, and intrinsically queer, the sketch was the perfect send-off for the performer who had a knack for goofball characterizations and off-kilter impressions, which made her a near-immediate star when she first stepped onto the stage at 30 Rock in April 2012. Ten years later, she leaves the show with a lasting legacy, including two Emmy wins for Outstanding Supporting Actress in a Comedy (the first cast member to do so).

But perhaps most importantly, McKinnon was the first openly gay woman to join the cast of the long-running series, and she made the show a better place simply by loudly and proudly being herself, which is why we are including her in this year’s Pride 50. Whether subtly or not-so-subtly, she brought a queer sensibility to all of her work, and anchored a number of all-time great LGBTQ-focused sketches that never punched down or made her queer community the butt of the joke.

As a tribute to Kate McKinnon’s trailblazing nine-and-a-half seasons on SNL, let’s take a look back at 5 of her best queer characters and sketches…

Though it was used sparingly over the years, “Whiskers R We” became one of SNL‘s goofiest and most reliable recurring bits, anchored, of course, by McKinnon’s bespectacled, whisker-loving Barbara DeDrew. Sure the kitten cameos upped the “aww” factor, and the strangely specific personality traits Barbara assigned them scored big laughs, but the real star was always the sapphic chemistry with the guest host of the week, typically some big-time Hollywood star (Charlize Theron, Amy Adams, Tiffany Haddish) who gamely de-glammed to get giddy alongside McKinnon, committed to character as ever.

In this play on gritty cop procedurals of the ’70s, McKinnon is joined by frequent collaborator Aidy Bryant (who also wrapped up her SNL tenure this last weekend) in the faux trailer for “Dyke & Fats,” and, well, it’s all in the name! Relying largely on bawdy and obvious sight gags, the pre-taped sketch brazenly lets these two comedy powerhouses reclaim their identities to wonderful effect. Before you can ask, “Are they even allowed to say that on TV?,” SNL flips things on its head when the police chief (played by a disgraced comedian we’d rather not name) refers to the pair by their titular names and they angrily snap back, “You don’t get to call me that!” “You don’t get to say it!” “Those are our words!” And scene. Pure brilliance.

It’s hard to imagine a sketch like this one becoming a reality without Kate McKinnon. Satirizing the public image of the gay mecca Fire Island (which was a dramatic Logo reality series before it was a highly anticipated rom-com), “Cherry Grove” took us “one beach away” where a group of affluent lesbians quietly and respectfully ruled the roost. McKinnon gleefully leads the cast and guest host Scarlett Johansson through a tour of stereotypes, like wine-fueled singalongs, tearful heart-to-hearts, and “miracles of home water birth.” If McKinnon wants to use her post-SNL free time to make this show a reality, we would absolutely watch.

If you haven’t noticed by now, this list is as much an appreciation of Aidy Bryant as it is one of Kate McKinnon—the two just have phenomenal on-screen chemistry, and frequently starred side-by-side as “friends” who were much closer than they’d let on. The apex of this dynamic has to be “Supermarket Sweep,” a throwback to the game show’s early-’90s heydey, in which John Krasinki’s chipper host was painfully ignorant to the relationship between Bryant and McKinnon’s “gal pals” no matter how many times they stared deep into one another’s eyes. Their fierce support of one another was hysterical (“Go, my provider!” “You’re my king.”), with the ultimate conceit of the sketch being that their passion made them stronger competitors—and stronger lovers—than their fellow straight contestants.

And let’s not forget that McKinnon was the reigning queen of the Weekend Update desk for much of her run, frequently pitching Big Queer Energy right to camera as guest commentators opposite Seth Meyers, Colin Jost, and Michael Che. Though her big-eyed plays on everyday people (like wannabe artist Cecilia Giménez), gonzo versions of political figures (the notorious RBG), or herself were always welcome, we have to give a special shoutout to her turn as fellow gay icon Billie Jean King. Looking ahead to the 2014 Sochi Winter Olympics, her King was brashly defiant in the face of Russia’s anti-gay legislation and—like the best of McKinnon’s work on SNL—defiantly gay.