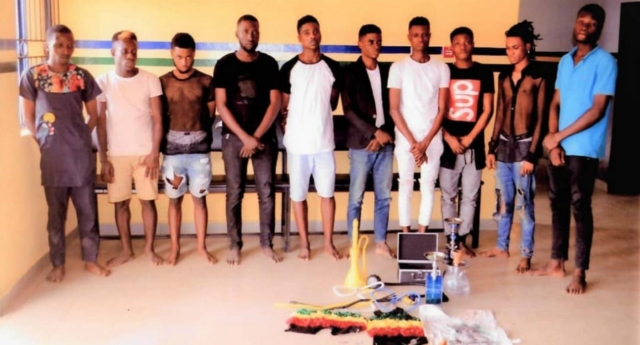 Police in Nigeria have arrested a whopping 57 men in a raid alleging a gay sex cult. It happened in the city of Egbeda in the province of Lagos, and marked the second such raid this month. Nigeria has a long and unfortunate history of violence and discrimination toward LGBTQ men.

Police raided the Kelly Ann Hotel & Event Center based on informant tips. There, they discovered an overnight party with about 80 men in attendance. Suspecting the presence of illegal gays and illegal substances, police managed to arrest 57 individuals, all of whom deny any wrongdoing.

“It was a birthday party and majority of us don’t know one another,” Igo Awoye, one of the accused, told the Nigerian newspaper The Premium Times. “I was invited by my friend Muyiwa for the party, and we were not only guys in the party, few ladies were with us and other ladies were in the hotel rooms getting dressed for the party. Since it was a party, a social gathering, there were lots of males than females.” Law enforcement did not arrest any women in the raid.

Police have further alleged that the party was part of an initiation ritual for a gay cult. Law forbids homosexuality in Nigeria, where some provinces prescribe stoning to death for anyone convicted of the crime. Because the raid happened in Lagos, the accused could face up to 14 years in prison if convicted.

Treatment of LGBTQ people in Nigeria–and more broadly, in Africa as a whole–has become the subject of international controversy in recent years. Earlier this year, British Prime Minister Theresa May attracted criticism from Nigerian politicians for condemning anti-gay laws in the country.

bottom of the barrel
43