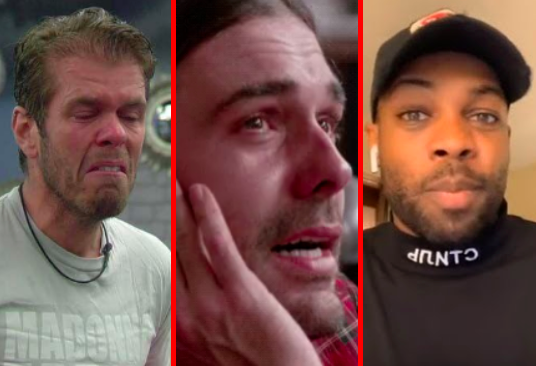 Breaking up is hard to do. Just ask Jonathan Van Ness.

This week, the 31-year-old Queer Eye star spilled some tea on his rugby playing ex, Wilco Froneman, who he split up with over the holidays.

According to Us Weekly, Van Ness’ original breakup announcement read, “Cheaters never prosper.” The announcement mysteriously vanished shortly after being posted and was replaced with a new caption quoting the lyrics to an Ariana Grande song.

She taught me love, she taught me patience, how she handles pain, that shits amazing. I’ve loved and I’ve lost but that’s not what I see because look what I found ain’t no need for searching, rounding out my 2018 with a very gorg THANK U NEXT. #selflove ???????????? Please don’t go in on Wilco, he doesn’t need the anger & I don’t want to see him suffer so just know I’m all good & sometimes people break up — Love you all so much ???

Of course, Van Ness is hardly the first guy to have a mini breakdown on social media following a particularly bad breakup. But at least he had the good sense to clean up his mess quickly.

Last October, the musician and RuPaul’s Drag Race judge took to Instagram to put his ex on blast. In a scathing post shared with his 1.2 million followers, Hall accused the guy of being a liar, a cheater, and a deceiver. He followed that up a few days later by sharing messages he’d received from other people about his ex’s alleged behavior. After he had calmed down, Hall apologized for the way he acted, saying, “I should have handled those situations behind the scenes.”

Shortly after the couple announced their marriage was over last May, Haynes released a country song titled “Man it Sucks (Acoustic)” that included the lyric, “I said I loved you despite the cheating drama. … Maybe in the future, you’ll come around.” This prompted many to believe Leatham had been unfaithful to Haynes, and that’s why their six-month marriage had ended. Haynes later clarified the song was about a different guy, not his ex-husband, who he said was an “amazing man”.

The YouTube stars confirmed their split back in September, and while breakup itself wasn’t that dramatic, the way they chose to announce it certainly was. The guys, who had been together five years, released an emotional, teary-eyed video, which they shared with their 700k followers, explaining that they had simply grown apart but that they “still f*cking loved each other” and would continue pumping out vids together. Naturally, this had many people wondering: What happens when new men come into the picture?

Last March, the professional internet troll uploaded a video railing against a guy who dumped him at a restaurant. To make a long and uninteresting story short, Hilton and the guy had been on five dates together. He thought they had a great connection. Until the sixth date, when the guy broke up with him just as they were sitting down to dinner. Hilton was livid. So he made a video about it. Evidently, he’s only into public humiliating others and doesn’t appreciate it when it’s done to him. Go figure.