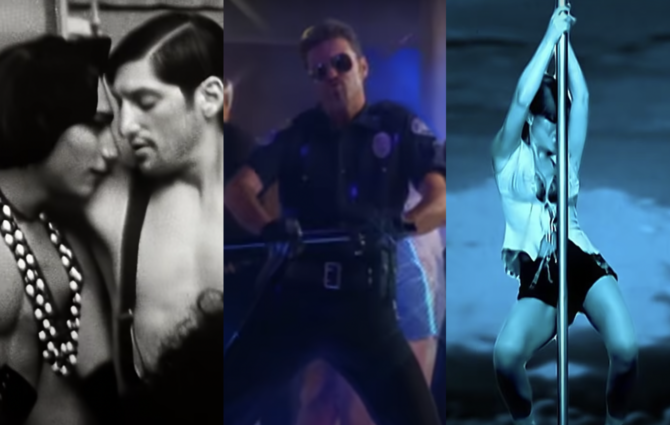 Everything is relative. While very little seems to shock audiences today, there was a time when some music videos were deemed “too hot” and needed to be edited or even censored lest they cause innocent, unsuspecting viewers to be damned to hell. More often than not, the offending videos alluded to or depicted some sort of same-sex relationship.

Queen’s “Body Language” made history when it became the first-ever music video to be banned from MTV in 1982 for its homoerotic undertones and nudity, despite all the members of the band being fully clothed. Nevertheless, the song was still a massive hit, receiving extensive radio play and peaking at #11 on the Billboard Hot 100.

George Michael channeled Freddy Mercury in this 1998 music video that caused quite a bit of chatter for its racy content and ultimately resulted in Michael being slapped with a $10 million lawsuit by Marcelo Rodriguez, the undercover police cop who arrested him earlier that year for lewd contact. It featured scenes of public sex stylized like surveillance footage and interspersed with footage of Michael, dressed as an LAPD officer, performing in a men’s bathroom. Rodriguez claimed the video “mocked” him and caused him “emotional distress.” The court later determined that, as a public official, he couldn’t legally recover damages from Michael.

The problematic Russian pop duo caused international panic in 2002 when they appeared as school girls who just wanted to make out in the rain but couldn’t seem to escape the judgemental stares of onlookers. The music video was a massive global hit despite widespread criticism for its depiction of underage lesbianism, even though neither of the singers actually identified as queer.

MTV refused to air the music video for the second single off Paula Abdul’s 1995 album Head Over Heels unless she made a cleaner version. The original video showed the singer rubbing up against a cane, pole dancing, and pouring a bottle of beer over her chest while riding a mechanical bull. (Gasp!) Abdul eventually made the changes and the single went on to reach #58 on the Billboard Hot 100 and was a hit on the dance charts and in gay clubs.

Despite being pretty heteronormative by today’s standards, Christina Aguilera’s ode to sex and debauchery played on a non-stop rotation at all the gay bars in late 2001 and early 2002. It’s accompanying music video celebrating sexual fetishes ignited a firestorm, receiving blowback from pearl-clutching conservatives as well as several of the singer’s peers, including Shakira, Kelly Osbourne, and Jessica Simpson. It was also boycotted in Thailand, randomly.

Of course, we couldn’t do a list of banned music videos and not include at least one by Madonna. Apparently the singer walking down a gritty hotel hallway, looking tired after a long day at work, and then being seduced by a mysterious man and woman was too hot for MTV in 1990. The video was banned, resulting in Madonna releasing it as a VHS single. It ended up becoming the first-ever short-form clip to be certified multi-platinum by the RIAA and remains the bestselling video single of all time with close to 1 million copies sold.