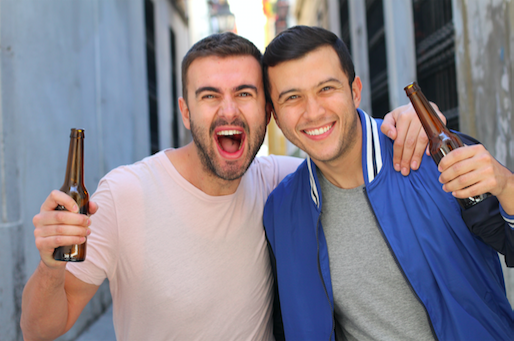 Many of us turn to liquor to help cope with stress, anxiety, and depression, some of which may be linked to discrimination we face. Traditionally, the commercial gay scene has also been largely based around bars and clubs.

The pandemic has only made things worse. In the US, online alcohol sales rose 243% in March 2020. In England, deaths caused by alcohol hit a new high during the first nine months of 2020 (up by 16% from the previous year). We’re all a little more stressed than usual.

If you’re consistently drinking more than this, you’re knocking back more than is good for you.

Here are some signs that your use of alcohol may have become problematic.

Blackouts occur when you have a high level of alcohol in your system. Booze can stop you from forming new memories, leaving gaps in your recollection.

If you’ve drunk enough alcohol to experience a blackout, you’re also highly likely to experience difficulty walking, talking, and standing, putting you at risk of falls or other accidents.

2. You find yourself making bad decisions while drunk that you later regret

We don’t just mean drunk-texting your ex. Bad decisions can include putting your health – or the safety of others – at risk. This can include driving under the influence or engaging in unprotected sexual encounters.

Lots of people might occasionally go online shopping after a few drinks, but if you’re regularly racking up debt on your credit card while intoxicated, you could have a problem on your hands.

Related: I’m sorry if you find my sobriety “boring.” Actually, I’m not sorry.

3. You have been told to cut back by a physician

This may sound obvious but it’s sometimes the wake-up call people need. And even then, it’s sometimes ignored. A visit to a health professional will often involve questions about how much you drink. If your physician tells you that you need to cut back, take it seriously.

“People are not honest with their physicians and their doctors, and even their therapists, about their alcohol consumption,” says Sarah McCusker, a licensed clinical social worker for the Addiction Services at the LA LGBT Center. “I think those in the mental health field are aware of that, but as with any type of harm reduction, your drinking should be discussed with your physician, and in an honest way.”

Taking time off work and regularly late? Not hitting your deadlines because you’re hungover? Working from home, sadly, doesn’t let you off the hook. Some experts say that the lack of traditional structure to the working day has led some people to adjust their drinking habits, perhaps starting earlier in the day or staying up drinking later than they used to because they don’t have to worry about a commute to work in the morning.

“People have had to confront their drinking in a way they hadn’t prior because they’re at home all the time,” says McCusker. “Their family, or partner, are maybe seeing behaviors they might not have noticed before. There’s more attention being paid to that, and so people are having to confront their alcohol consumption.”

5. People close to you have voiced concern

Sometimes, long before a person realizes they have a problem, others may have started asking questions about it. If you’re on the receiving end of such comments, do you bristle at them or immediately shut down their concerns? If you find yourself getting defensive, bear in mind how your drinking may be impacting your relationships with those closest to you.

“The number one sign is a consequence,” says McCusker, when asked why people seek help. “That is what will make people quit drinking most often: they have had a severe consequence, such as the end of a relationship: professionally, romantic or familiar.

“On a smaller scale, there are the smaller consequences of drinking, where they are having difficulties in relationships again. Pretty quickly, if they start doing the work backward, it is linked to their drinking.”

6. You get anxious about not having enough alcohol to hand

“That’s a really big one,” says McCusker. “So often, that is what people mention to me. Blackouts, or someone mentioning your drinking, those are things that can often be explained away by, ‘They’re uptight’ or something like that. Or the blackouts, ‘Well, it was a wedding, it was a celebratory situation.’ People can try to explain some of those things away. But the insidious worrying about how much alcohol you have, and checking your glass and checking everyone else’s glass, it’s the control of the consumption.” McCusker believes these are harder signs to dismiss.

7. You set limits that you repeatedly fail to meet

Do you pledge to stick to only a couple of drinks but then have more? Or decide to go a week without drinking but only last a couple of days? If you feel that you’re drinking is out of your control, seeking professional help could help. And, just as importantly, remember that asking for help is nothing to feel ashamed about.

McCusker adds that although the idea of tackling an alcohol problem can be daunting, she’s seen many people succeed in addressing their alcohol use. But she also thinks the pandemic is going to prompt a lot more people to question their drinking.

“There are a lot of people who have gotten sober during the pandemic. Perhaps no-one in their family had previously said, ‘You’re drinking is out of control.’ But after nine months, they’ve realized, ‘Oh, maybe this is a problem.’ And for some people, maybe they were right on the line, and they’ve crossed that invisible line during the pandemic and I think we will see the repercussions of that for a long time.

Isolation is a huge indicator of alcohol abuse.”

Related: How can I best help a friend I suspect has an alcohol or drug problem?