During last week’s Saturday Night Live, the world LOL’d Melissa McCarthy’s Emmy-worthy cameo as Donald Trump’s hilariously incompetent press secretary, Sean Spicer. McCarthy’s spot-on impersonation of the blustery, factually-challenged wordsmith went viral, both because of its satirical value, and because of its hilarity. But not everyone has a sense of humor. Trump, along with his staffers, have voiced their ire over the sketch—not just because of the negative way it portrayed Spicer, but because SNL cast a woman to play him.

Given the overwhelming enthusiasm for the sketch (ok, outside the bizarro world of this White House), the internet chatter has already begun about what other comic actors and actresses should, like Alec Baldwin and Melissa McCarthy, take up permanent guest-star status to play the comic version of Trump’s gang-of-clowns. Granted, some cast members already have certain figures filled, like sister Kate McKinnon taking on the part of spokesghoul Kellyanne Conway. The rest, however, remain fair game.

Since the drag-casing of Spicer so got under the Donald’s skin, we’ve thrown together our own cast list…gender swapping some of the most prominent faces in the Trump administration for some of the funniest names in comedy. 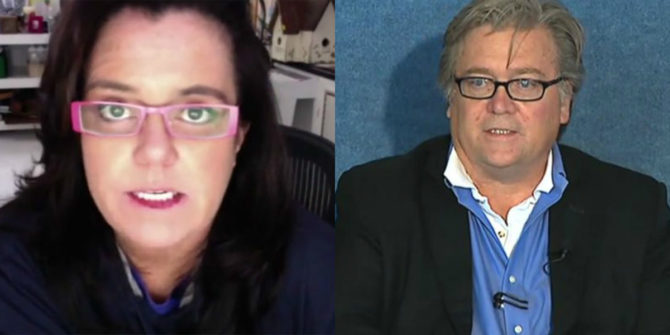 To begin with the obvious, an internet campaign kicked off as soon as Melissa McCarthy’s sketch aired to cast the lesbian Queen of Nice as right-wing wingnut and Trump advisor Steve Bannon. More to the point, Rosie has already offered her services to SNL. We hereby endorse Rosie’s casting, both because of her penchant for sketch comedy, having already hosted SNL to some acclaim, and because she and Trump have some nasty history together. If Trump thinks winning the White House (while losing the popular vote, mind you) somehow vindicates him in his battle with Ms. O’Donnell, then her getting to make fun of his crazypants, white supremacist chief advisor for the next four years (or less, a girl can dream) should mark one heck of a comeback. 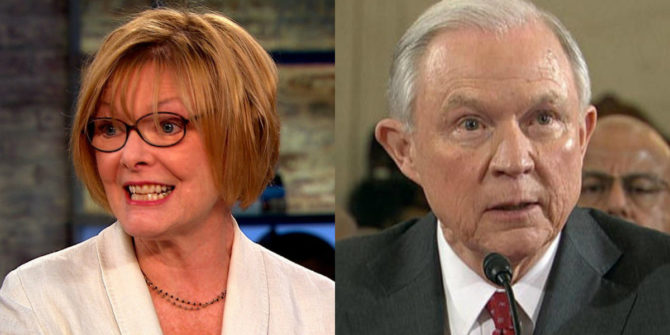 Curtin, of course, rose to fame as one of the breakout female performers in the original cast of Saturday Night Live. To celebrate the show’s 40th anniversary, she returned to her role as “Weekend Update” anchor for the Anniversary Special, and proved that she’s lost none of her appeal or comic timing. Seeing her back on the show reminded the world of the zest she brought to the program, so why not have her back as incoming Attorney General Jeff Sessions? Curtin’s steely eyes make her a suitable doppelganger for creepmaster Sessions, though she will, no doubt, have to undergo a fair amount of make-up to look more like a Munchkinland serial killer. 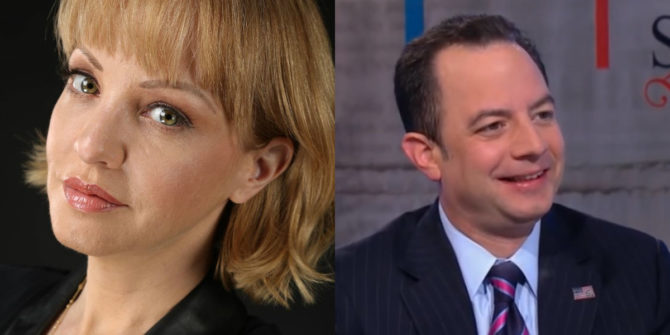 Anyone familiar with McLendon-Covey’s featured stint on Reno 911!, who remembers her work in Bridesmaids or on The Goldbergs will note her impeccable comic gifts. Even better, as a member of the Groundlings, the notorious comedy troupe, McLendon-Covey knows her way around sketch comedy. She also knows how to keep a straight face when uttering ridiculous and hilarious dialogue. Granted, she’s in far better shape than RNC chief Priebus, though the similar jaw lines of the pair make McLendon-Covey a fitting performer to take on Priebus. That Priebus has some well documented problems with women in the past makes McLendon-Covey’s casting all the more interesting.

The man who forgot he wanted to abolish the Department of Energy now heads it, in a twist that only underlines the crazy, surreal dimension American politics has taken on. Rick Perry, noted for his Brokeback Mountain–esque campaign ads and bizarre speeches, offers no shortage of comic fodder to the SNL troupe. His documented use of painkillers to treat a back injury—which might explain some of his erratic behavior—also holds a good deal of potential for some hilarity. Actress Allison Janney has long proven herself a reliable comic talent, and her bookish veneer will help her imitate Perry, who always does his best to look hunky and educated…until he opens his mouth. Besides, who wouldn’t want to see Janney recreate some of Perry’s oddly homoerotic campaign ads? 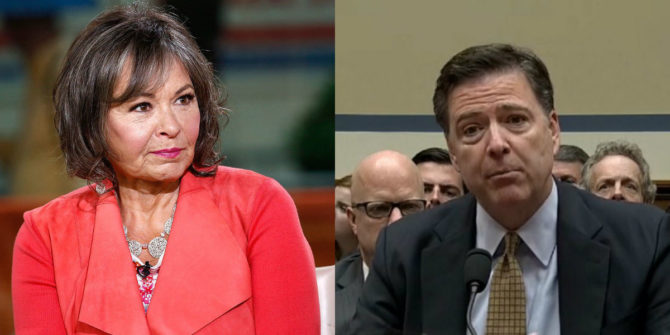 James Comey’s obsession with Hillary Clinton’s more-boring-than-paint-drying emails—and the big fat nothing he continues to uncover using taxpayer dollars—may or may not have thrown the election in Trump’s favor. Maybe that’s why Trump has opted to keep Comey in his Obama-era position as FBI director. Any performer hoping to parody the man will need to mirror Comey’s knack for irritating the political sphere. Who better to play him than a woman known to irritate and amuse—Roseanne Barr. Roseanne, of course, knows a thing or two about comedy, and given that she’s spent a good deal of her latter years engaged in political demonstrations—including a wayward presidential run of her own—letting her guest on SNL might give her the platform she needs to vent her political and comic steam, a potentially potent combo for the pro-gay star. 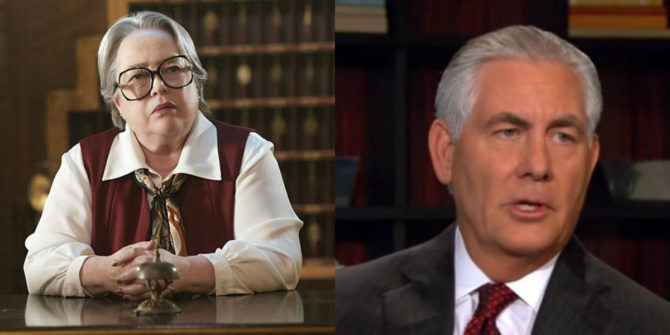 The appointment of oil baron Rex Tillerson as Secretary of State raised eyebrows on both sides of the aisle, given his connections to foreign oil and penchant for enjoying champers and caviar with his killer bud, Vlad Putin. No doubt his name will continue to make headlines as Congress (hopefully) investigates his business dealings, and should Trump start a foreign war of some kind. Tillerson’s drawl and personality make him something of a self-parody: the SNL writers couldn’t have concocted a better Texas oil stereotype if they’d cast Foghorn Leghorn as Secretary of State. Oscar-winner Kathy Bates, always game for some savage comedy, has played this kind of southern nincompoop before to great effect in movies like The Waterboy. Why not give her a chance to impress again? 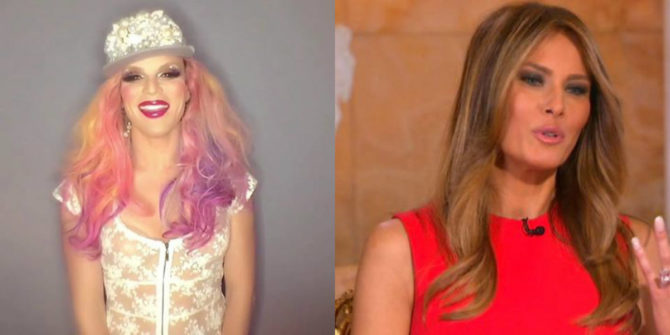 And finally, just to remind the world that drag still goes both ways, and just to further drive Donald & company crazy (or crazier, as the case may be), SNL ought to tap noted actor and drag queen Willam for the role of Melania Trump. Granted, Melania has conspicuously vanished from public sight, likely relegated to her ivory prison of Trump Tower. Just think what fun the writers could have with Willam—who knows no bounds or shame—playing a locked-up Melania, or lampooning her nude model past. Besides, what could evoke Trump’s ire more than letting a drag queen play his wife?

Weigh in with your own suggestions in comments below. The possibilities are endless.