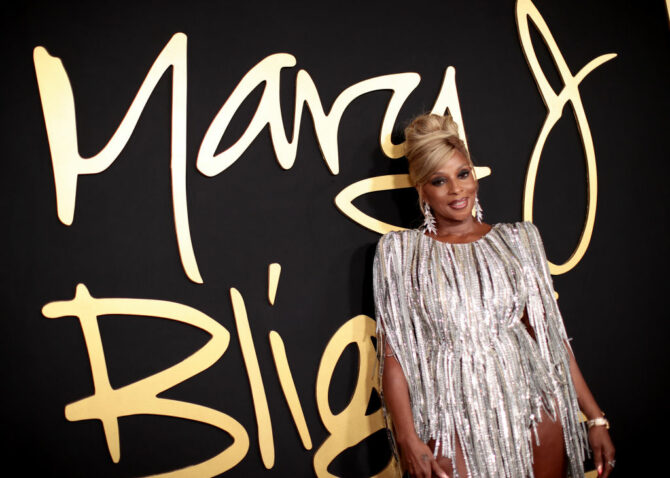 Mary J. Blige is one of five headliners taking the stage at the Super Bowl halftime show this Sunday and she promises it’s going to be the “most epic thing in music.”

“Just know this. It’s some history, man,” the nine-time Grammy Award winner told Good Morning America this week. “It’s just going to go, you know, through the sky. You know, I say the sky’s the limit? There’s no limit on this sky.”

Though she’s known as the “Queen of Hip-Hop Soul”, Mary has dabbled in many different musical genres over the course of her 30+ year career. We’re partial to her dance songs, which she doesn’t record often, but when she does, she always nails it.

In the fall of 2001, everyone at the gay bar was having fun with this dancery. Arguably Mary’s biggest club anthem, the single topped the Billboard Hot 100 for six weeks, knocking J. Lo’s “I’m Real (Murder Remix)” from the #1 spot and marking the singer’s first top ten single in five years. It remains a concert staple to this day.

Speaking of Chaka Khan, in 2007 Mary co-wrote and provided guest vocals on this record, which appeared on Khan’s eleventh studio album Funk This and reached #1 on the Billboard US Dance Club Songs chart. It also nabbed the award for Best R&B Performance by a Duo or Group with Vocals at the 50th Grammy Awards.

In 2014, Mary gave her queer fans exactly what they wanted when she teamed up with Disclosure to produce this absolute banger included on her twelfth studio album The London Sessions. The EDM song peaked at #1 on the Billboard US Dance Club Songs chart and spawned several remixes.

After joining forces on The London Sessions, Mary and Disclosure hooked up again to record a remix version of the fourth single from Disclosure’s debut studio album, Settle. It peaked at #7 on the UK Dance chart before being nominated for Best Dance Recording at the 57th Grammy Awards.

We would be remiss not to include the first single off Mary’s eighth studio album Growing Pains, which saw the singer feeling, as she puts it, “just fine fine fine fine fine fine ooh.” The feelgood bop topped the Billboard US Hot Dance Club Play chart and received a remix featuring Lil’ Mama. Mary also recorded not one but two different music videos for it.

Another one from The London Sessions, this deep track was co-written by Sam Smith, who also provided backing vocals. It features soulful lyrics and a pulsing beat that practically begs to be remixed by a DJ. Why it was never released as a single will always be a mystery to us.

Last but certainly not least… Mary covered Shalamar’s 1982 hit for her soundtrack album Think Like A Man Too in 2014. Neither the album nor the promo single made much of a dent on the charts, which is a shame, but it’s a gem us diehard stans definitely still remember.

Subscribe to Queerty for a daily dose of #entertainment #maryj.blige #superbowl stories and more