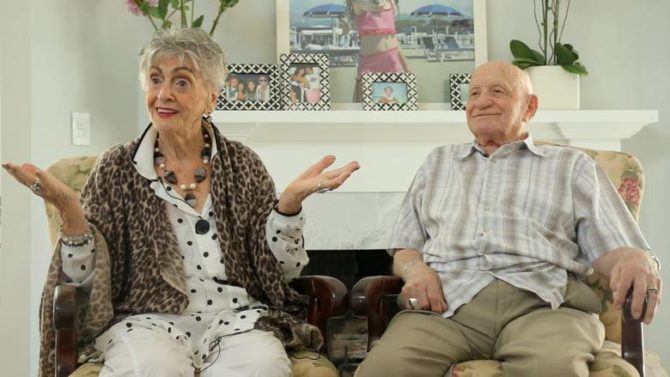 Here’s a story you don’t hear every day…

On My Way Out: The Secret Life of Nani and Popi is a documentary short by filmmakers Brandon and Skyler Gross. The film chronicles the relationship between their grandparents, Roman (Popi) and Ruth (Nani) Blank, both Holocaust survivors, who have been married for 65 years.

Related: Gay Seniors Transform Their Most Personal Stories Into Art

But this isn’t your typical feel-good, old-couple-that’s-been-married-since-forever kinda film. There’s a major twist. In the film, Roman, at age 95, reveals to his grandkids a secret he’s been keeping for nearly a century.

Roman goes on to tell his family that he’s gay and that he’s kept his sexuality a secret for his entire life out of survival. The only other person who ever knew… was Ruth.

The filmmakers learn that Ruth first discovered her husband was gay way back when they were in their 20s, but she kept his secret for almost seven decades. The couple went on to raise a family together and open a chain of beauty salons without anyone ever catching on.

On My Way Out: The Secret Life of Nani and Popi will premiere this weekend at the Toronto International Film Festival. Check out the trailer…

Secrets, lies, and a senior (citizen) prom… Fall in love with Nani and Popi when "On My Way Out" premieres at @TIFF_NET 9/8. pic.twitter.com/uK7sQebJ5j

Subscribe to Queerty for a daily dose of #entertainment #comingout #onmywayout:thesecretlifeofnaniandpopi stories and more