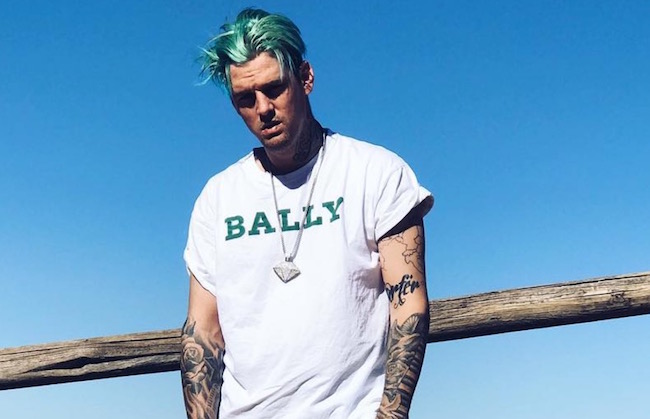 2017 has been quite the whirlwind for Aaron Carter. In early August, he came out as bisexual. The next day, his girlfriend dumped him. Nevertheless, he claimed he was looking forward to the future. In fact, he was busy readying a performance at gay bar Hamburger Mary’s in his hometown of Brandon, Florida. During that show, he broke down and wept, extremely moved by everything.

Then, to demonstrate he’s genuinely bisexual and this wasn’t some publicity ploy, he hit on actress Chloë Grace Moretz. Twice.

Then? A mere week after he came out — only a week has passed — all of Carter’s social media pages went surreptitiously dark. His ex-girlfriend claimed she wasn’t homophobic and has lots of gay friends. But that’s when Carter turned around and said:

“When it comes down to it, really, I had an experience when I was 17 with a guy, but now as an almost 30-year-old man, I’m going to be pursuing relationships with women. I want to pursue a relationship with a woman.”

So then? Well, he got on live TV and took an HIV test. During the broadcast, he revealed the depth of his substance abuse issues. Shortly after, police rushed to his home after reports that he was “on the verge of death.”  That inspired him to enter rehab and kick each and every one of his demons to the curb. And then we went and did the same thing, just to make sure we were now totally demonless and on the exact same page as Aaron.

So then then?  Well, after that, Carter — who weighed only 115 pounds in October — ate sandwiches and beefed up to 160 pounds.

Proud of the coup, he posted a before-and-after shot to Instagram along with a pertinent message to his followers:

Which shuttles us right through a time tunnel that places us smack dab in the present.

Hi there. So. Popping ’round the LGBTQ&A podcast this week, Carter said he’s now really ready to give bisexuality a go, but for real this time.

“I definitely embrace my bisexuality and, you know, it’s still new to me. I just started talking about it, really. I have my confusions and I’m still learning about the community.

Who knows what the future has to bring, whether it’s a relationship with a guy, I don’t have a problem with that. It’s something that I’ve already thought about for the album after this one. It’s already been thought through.”

And now? We brace ourselves for more developments in Aaron Carter’s life in 2018.

Who knows what the future has to bring?