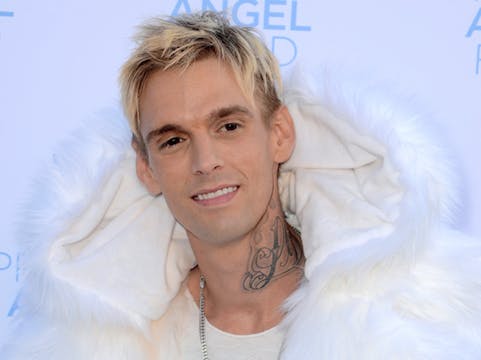 Times are strange. Aaron Carter‘s adult film debut is said to have involved peeling bananas with his feet.

Even stranger is the prospect that actual humans paid actual currency to view it take place, but hey, we’re not here to judge.

Carter, whose OnlyFans launched in March to abysmal reviews, upped the ante when he announced on Instagram last week that he’d be appearing on adult cam site Cam Soda.

“It’s my first time! Check me out live tonight @camsoda 9pm PST #camsoda #cammodel,” he wrote, sharing a bathroom mirror selfie showing off his torso. His Instagram page has since been switched to private.

OK but what about that banana, you’re surely asking.

Related: The reviews of Aaron Carter’s OnlyFans page are in and they’re not good

A CamSoda representative told Page Six that Aaron will “eat bananas teasingly and peel some with his feet” during the show.

But…did he actually do any of those things? Unclear.

Metro UK dutifully reported after the fact that Aaron “shot scenes in his shower as well as his bedroom, where he was at one point seen sitting on his bed naked, playing the guitar.”

Promising to peel a banana with your feet is an oddly specific hook if you don’t actually follow through, but maybe we’re just old fashioned.

Either way, some fans who tuned in didn’t appear to be too upset:

@aaroncarter was my first concert and now the first cam model I've tipped to watch their show??

I have now also paid to see Aaron in concert…well my parents paid xD and now I have tipped to see his cam show, I am gonna let my mom know about it for sure lmao

Back in May, Carter’s fiancée, Melanie Martin, made her debut on the same website.