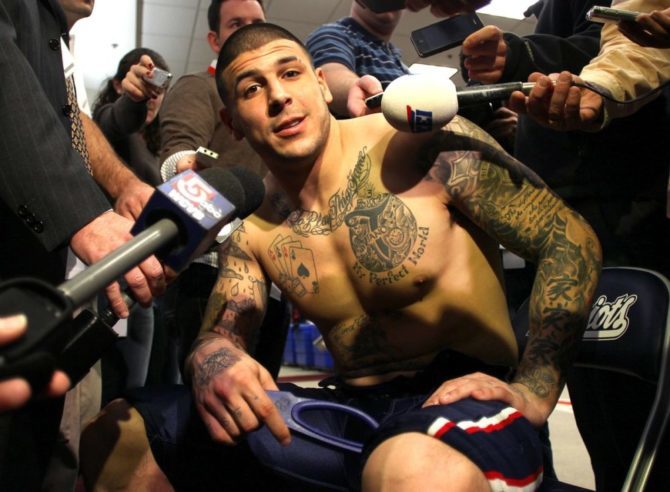 Late ex-NFL player and convicted murderer Aaron Hernandez’s alleged teenage boyfriend is speaking out for the very first time in a lengthy new profile published by The Boston Globe.

Hernandez was convicted of murdering Odin Lloyd in 2013. In 2017, he killed himself in his prison cell. Shortly after his death, rumors that Hernandez had a gay jailhouse lover began swirling.

Speaking to The Boston Globe, Dennis SanSoucie says his friendship with Hernandez began in middle school when they both played on the same youth football team and continued all through high school.

He and Hernandez smoked a lot of marijuana–before school, before practices, and after games. It would become the beginning of Hernandez’s lifelong relationship with getting high, even before big games.

Dennis SanSoucie recalled the first day of junior year walking with Hernandez near the high school.

“We were baked,” said SanSoucie, who later joined the Marines.

The sex is something SanSoucie, who came out as gay in his late 20s, has never told anyone about. Until now.

“Me and him were very much into trying to hide what we were doing,” he explains. “We didn’t want people to know.”

SanSoucie said he and Hernandez worked hard to keep their relationship a secret. In their traditional community of Bristol, where Dennis was bound for the military and Aaron for big-time football, it was not something they wanted people to know about.

Asked how he thinks Hernandez would feel about him talking about their relationship today, SanSoucie says he believes he would be OK with it.

“I really truly feel in my heart I got the thumbs-up from him,” he says.

Meanwhile, Hernandez’s fiancee, Shayanna Jenkins-Hernandez, has repeatedly denied he was gay or bisexual. In August, she put out a statement that read, in part: