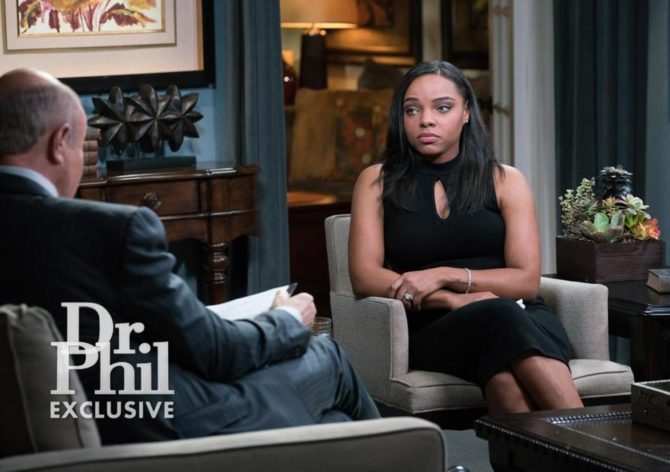 The fiancee of Aaron Hernandez, the ex-New England Patriots star and convicted murderer who committed suicide in prison last month, went on Dr. Phil this week to deny rumors that the former tight end was gay or bisexual.

According Shayanna Jenkins-Hernandez, 27-year-old Hernandez didn’t have a same-sex loving bone in his body.

“I had no indication or any feeling that he was [gay],” Jenkins-Hernandez insisted. “He was very much a man to me. I don’t know where this came from.”

She continued, “It’s embarrassing, in a sense. It’s hurtful. Regardless if it was true or not, it’s just not something that I saw. It’s not something I believe, and it’s not him.”

Very much a man? Embarrassing? Talk about subtle homophobia. We’ll give her a pass this once, though, considering everything that she’s been through.

Hernandez was convicted in the 2013 murder of Odin Lloyd. After he was found hanging in his prison cell last month, it was purported he left behind three suicide notes: one to his daughter, one to his fiancee, and one to his jailhouse lover, Kyle Kennedy, to whom he also gifted a $50,000 watch.

When asked about rumors that Hernandez committed suicide because he couldn’t accept his sexual orientation, Jenkins-Hernandez said that sort of thing wasn’t in his character.

“It doesn’t sound like Aaron. Aaron never, never necessarily ran from a situation. We’re in 2017. There’s so many people that are coming out, that feel comfortable in their skin. I didn’t see him as being uncomfortable.”

And when asked about Kyle Kennedy, Jenkins-Hernandez said she’d never heard of him before Aaron’s suicide.

“I don’t know who this Kyle Kennedy is,” she said. “Aaron never mentioned him.”

She added that rumors Hernandez left Kennedy a left and a $50,000 watch were all a “crock of bull.”

After the episode aired, Kennedy released the following statement:

I want to be clear that at no time have I seen a note addressed to me from my close friend Aaron Hernandez but I have reason to believe it was in fact intended for me. It was the press that first reported that this letter was sent to me and as a result, my attorney, Larry Army Jr., has repeatedly requested a copy for us to review. The story about who this letter was sent to has changed several times but based upon the close relationship that I had with Aaron, it is highly likely that it was in fact intended for me. I again renew my request to have the letter released to my attorney so we can put this issue to rest.

Here’s hoping everyone involved in this tragedy can one day find peace.