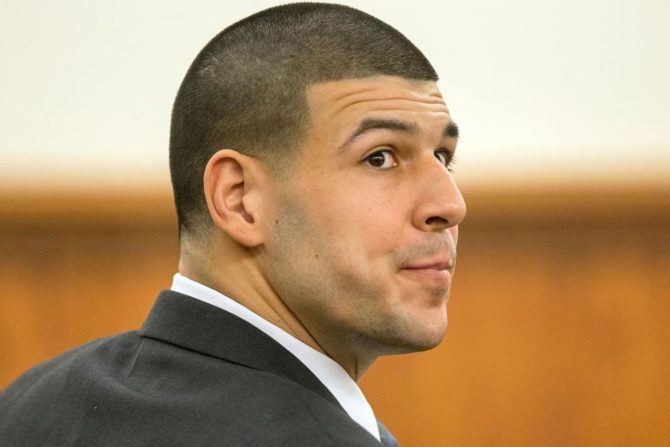 The lawyer for Aaron Hernandez is throwing cold water on rumors that the former NLF star and convicted killer had a jailhouse lover, but many folks who were close to the deceased are still suggesting otherwise.

“Rumors of letters to a gay lover, in or out of prison, are false,” Jose Baez said in a statement to NBC News this week. “These are malicious leaks used to tarnish someone who is dead.”

Just to recap: The 27-year-old former Patriots star was serving a life sentence for murder. He found dead in his prison cell last Wednesday. The cause of death was ruled a suicide (asphyxia by hanging).

According to multiple reports, including a spokesperson for the Worcester County District Attorney’s Office, Hernandez left behind three handwritten suicide notes.

When asked to clarify who the last note was addressed to, a spokesperson for the D.A.’s office simply said: “The information I have is unclear.”

Kennedy’s attorney, Larry Army Jr., issued a statement this week requesting that, if the third letter was, indeed, addressed to his client, they would like it handed over immediately.

“My client is obviously saddened by the loss of his friend, Aaron Hernandez,” Army said. “We will be requesting that the letter be turned over to my client a soon as possible.”

There were also reports that the day before Hernandez committed suicide, he gave Kennedy’s family a $50,000 watch.

But Baez insists rumors about any romantic involvement between Kennedy and Hernandez are just that, rumors.

“Representatives, on behalf of an individual named Kyle Kennedy, continue to advise the media such a gay love letter exists,” he said in the statement. “Accordingly, on behalf of the family of Aaron Hernandez, I am reaffirming, unequivocally, no such letter to Mr. Kennedy, or any other individual, in or out of prison, exists.”

The statement comes just one day after Hernandez’s cousin, Davina Hernandez, told In Touch that she “didn’t know” whether or not he had a jailhouse lover, or if he identified as gay or bisexual, though she seemed to imply that it wasn’t outside the realm of possibility.

“He’s definitely never made any mention of [having a lover in prison],” Hernandez said. “No, he would just always say, ‘I’m fine.’ He would always say he kept to himself so I don’t really know how true that is or if he just wanted us to know that he was OK. I don’t know.”

All three suicide letters were released to Hernandez’s family on Monday, the same day he was laid to rest in his hometown of Bristol, Connecticut.