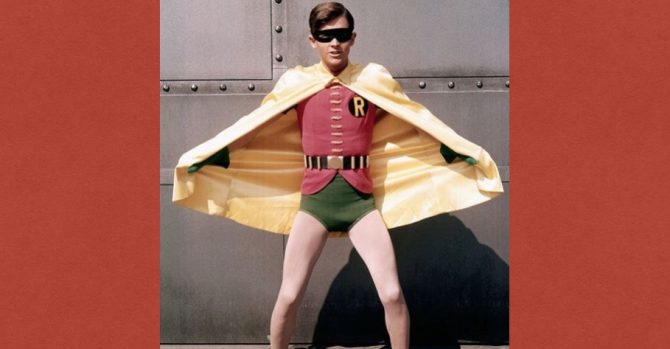 Holy shrinkage, Batman! There’s method acting, and then there’s… whatever this is.

Burt Ward, who played Robin in the camptastic Batman series which ran on ABC from 1966-1968, has waited over five decades to reveal just how far he was asked to go for the part.

The famously-tight fitting costumes were apparently too tight in the lower regions, so much so that the Catholic League of Decency filed a complaint with ABC.

And rather than take the costume out, the studio took Ward in.

“They thought that Robin had a very large bulge for television,” Ward told Page Six.

“With Adam they put Turkish towels in his undershorts,” he added, before explaining that he was sent to a doctor who prescribed pills “to shrink me up.”

Related: There are new developments in the ‘Are Batman & Robin gay?’ debate

“I took them for three days and then I decided that they can probably keep me from having children,” he said. “I stopped doing that and I just used my cape to cover it.”

Last week, Ward unveiled a star on the Hollywood Walk of Fame which he called an “amazing experience.”