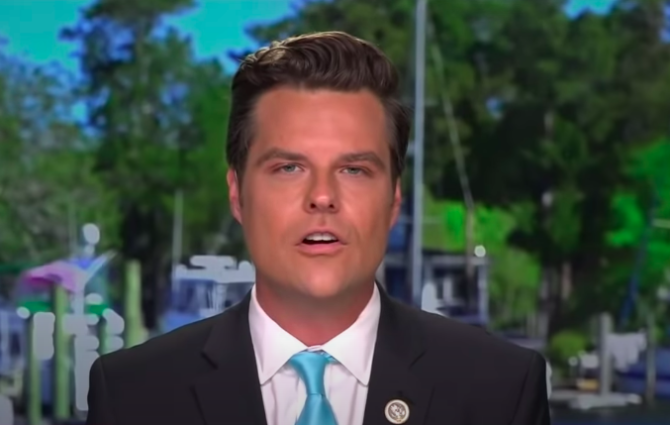 More lurid details have emerged in the whole Matt Gaetz teen sex scandal and literally nobody is surprised by any of them.

According to The New York Times, the Department of Justice investigation into Gaetz involves not just that 17-year-old, but payments he made to multiple women who were recruited online for sex.

Gaetz’s buddy, former tax collector Joel Greenberg, allegedly worked as a pimp by connecting Gaetz with women he met on dating websites. He would coordinate the dates, times, and places for their meetups, as well as negotiate how the women would be compensated for their time, usually through money, gifts, and travel.

Related: Matt Gaetz urged to lawyer up amid reports of empty Costco-size box of condoms found in office trash

In what may be the sloppiest cash-for-sex coverup ever, the arrangements were usually done over text message and payments were made via Cash App and Apple Pay, leaving behind a convenient paper trail for investigators to follow.

The Times has reviewed receipts from Cash App, a mobile payments app, and Apple Pay that show payments from Mr. Gaetz and Mr. Greenberg to one of the women, and a payment from Mr. Greenberg to a second woman. The women told their friends that the payments were for sex with the two men, according to two people familiar with the conversations.

The report also claims Gaetz and the woman often took ecstasy prior to hooking up and that, as he grew more comfortable with his little sex operation, the antigay lawmaker started orchestrating an underground prostitution ring, of sorts.

In some cases, Mr. Gaetz asked women to help find others who might be interested in having sex with him and his friends, according to two people familiar with those conversations. Should anyone inquire about their relationships, one person said, Mr. Gaetz told the women to say that he had paid for hotel rooms and dinners as part of their dates. The F.B.I. has questioned multiple women involved in the encounters, including as recently as January, to establish details of their relationships with Mr. Gaetz and his friends, according to text messages and two people familiar with the interviews.

Because all of this isn’t sleazy enough, CNN also reports that Gaetz allegedly bragged to his fellow lawmakers about all the women he had slept with and would share their nude photos and videos, sometimes on the House floor.

Gaetz allegedly showed off to other lawmakers photos and videos of nude women he said he had slept with, the sources told CNN, including while on the House floor. The sources, including two people directly shown the material, said Gaetz displayed the images of women on his phone and talked about having sex with them. One of the videos showed a naked woman with a hula hoop, according to one source.

“It was a point of pride,” one of the sources said of Gaetz.

Gaetz has denied everything and claims he is the victim of a $25 million extortion plot. Here’s how folx on Twitter are responding to reports that he has to pay for sex…

Is anyone really surprised Matt Gaetz has to pay for sex? Or that he uses Ecstasy while having sex he pays for?

Matt Gaetz never pays for sex! He either uses roofies or takes his girlfriends to Chucky Cheese.

Matt Gaetz claims he is a victim of extortion. That would not be possible if there was no reason for the extortion.

Matt Gaetz used Nestor to lure underage girls to his home. Bet on it.

I absolutely believe that Matt Gaetz pays for sex!

Startling lack of Matt Gaetz predictions in the QAnon archives.

Matt Gaetz appears to be in a world of shit. The dude was paying for sex using CashApp and ApplePay? Genius.

Matt Gaetz would have gotten away with everything if he only bragged to Jim Jordan because Gym keeps sex crimes against minors to himself.

Can we go back to Matt Gaetz needing to pay for sex?

can't Matt Gaetz just emotionally pay for sex like the rest of us?