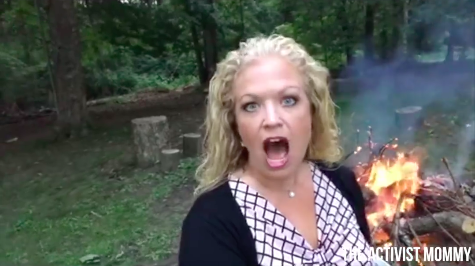 Still riding high on her 15 minutes over her #PullTeenVogue campaign, Elizabeth just shared an exchange she claims to have had with a gay man who reached out to her for support.

“I’ve decided to share with you a beautiful email conversation I had for several weeks with a homosexual male,” the mother-of-10 tells her 200,000 followers. “I hope you will be as mesmerized by the exchange as I was. This is what I sometimes do at 2 or 3 am when my house is quiet.”

It all starts with a friendly note from a fan named Josh:

“Dear Madam,” the letter begins. “I don’t know what compelled me to write to you today and you probably won’t read this but I’d like to thank you for doing these videos and bringing some sanity back to the world.”

Josh goes on to explain that he’s gay and that he once “rejected Jesus” because he thought Jesus had rejected him, but seeing Elizabeth’s hateful, homophobic videos made him realize that maybe, just maybe, Jesus loved him after all.

“If you are reading this,” Josh writes, “please can you tell me how can I find redemption? I don’t want to go to hell.”

Elizabeth replies by telling him that her “heart breaks” for him and that his letter “nearly took my breath away.”

I just finished a private conversation like this with another young homosexual man who was asking questions too. This is the reason I do what I do. I try to look past all the hate mail in hopes for moments like this when a sincere person comes along.

She tells him “redemption is so close” and that God will forgive him for his “unrighteousness.”

What then follows are several messages talking about the virtues of Jesus (“He is not at all like the [Catholic] priests who have lied and abused people. He is always trustworthy and good and holy”), whether or not Josh owns a Bible (He doesn’t, but he’s going to get one very soon), as well as his current relationship status (“Redemption comes through a relationship with Him. Are you ready for that? Are you in a relationship with a man right now?”).

At one point, Josh mentions people who claim to be Christian but don’t actually following the teachings of Jesus, to which Elizabeth replies:

Yes you are right. Many so-called Christians do not live like Christ. It is sad. Just like you might be able to identify with the dilemma of people in the gay community who give gays a bad name. Keep your eyes on Jesus, not necessarily those who claim to be His followers.

She also recommends the names of some friendly ex-gay activists, or “former homosexuals” as she calls them, with whom he might be interested in connecting.

Then they bash liberals for a bit.

” The Left is really starting to scare me with their censorship and authoritarianism,” Josh writes.

“Yes the censorship is getting way out hand!” Elizabeth replied.

The exchange ends with Josh saying he’s “ready to call upon Jesus” and Elizabeth telling him how very “excited” she is for him.

Read the entire thread below. Or don’t…