Nicole Maines once offered lessons in becoming herself. Now, she becomes someone else for a living.

The Maine native first made headlines as an anonymous student who sued her school district in 2013 over bathroom discrimination. School officials had barred Maines, who is transgender, from using the women’s bathrooms. She won her case, and eventually went public to describe the experience in the family memoir Becoming Nicole: The Transformation of an American Family.

Maines’ activism also led to on-camera appearances in television and film discussing her experience as a transgender American. Her natural charisma also led to acting opportunities, including appearing as the first transgender superhero on American television with her role as Dreamer/Nia Nal on The CW series Supergirl, produced by Greg Berlanti. Last year, she also earned acclaim (and a Queerty Nomination) for her work as a vampire in the indie horror film Bit.

With her star on the rise, Queerty snagged some time to chat with Maines about the unusual trajectory of her life, her newfound acting career, and her survival lessons for the COVID-19 lockdown. Supergirl airs Sundays on The CW.

So, I must say, with everything going on I feel obligated to ask: how are you right now? Are you ok?

Thanks for asking. I’m really good. I came down to Austin; I’m staying with my parents. I try to keep myself busy any way I can. I’m playing lots of video games. I just re-downloaded Skyrim.

I’m doing a playthrough. Always fun. I got Disney+, and they released the final season of Star Wars: Clone Wars, which was a big show when I was a kid. I love it, so I’m rewatching. It still holds up. It’s amazing. And I’m doing art with my tablet. I sit in bed and doodle away.

Sweet. So you’re one of the most prominent trans actors on television. I don’t want to call you a trans action hero; that makes you sound like an ATM.

What kind of responsibility is it to play a character like Dreamer, the first transgender superhero on TV?

I feel like being the first for anything has a certain amount of pressure. You’re setting where the bar is going to be. You want to set it as high as possible because you don’t want to be the one that messed up. It’s like oh, she messed up. No more trans superheroes!

So I want to do so well so we can continue to have trans superheroes. Fortunately, the response has been responsible. People love Nia, the character. People who aren’t trans love the character, which is almost cooler than hearing that trans people love Dreamer. I was pretty sure that the response from the trans community would be very positive. My own reaction was so excited, so I knew the community would love it. But the number of cisgender people that come to me and say “Dreamer is my favorite character. She’s my favorite superhero.” Aside from her transness, she’s a really special character. She’s just awesome, and its been amazing to see people love her as much as they do.

It’s true. In looking at the show, what strikes me—you’re right—is that it’s not about her being trans. It’s about a woman in an extraordinary situation, who happens to be trans. It’s her relationships with characters like Kara and Brainy that are so relatable. She’s a woman finding her purpose.

Absolutely. It’s a true coming of age story. Her transness isn’t the biggest part of her story. Coming into Season 4, the biggest problem on her mind wasn’t her transness. It was seeing the future in her dreams and not knowing how to handle it. 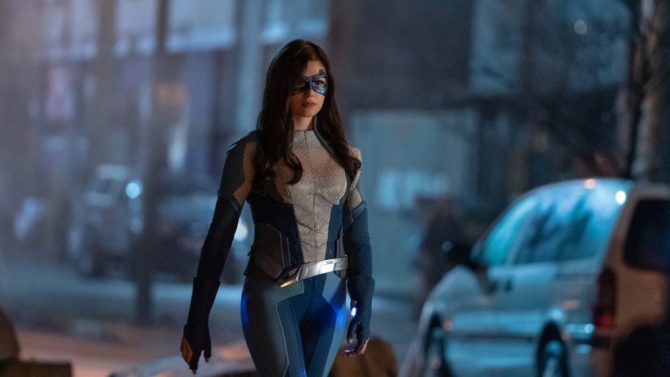 She’s just trying to get through the day, yeah. It’s so simple that way. Nia has obviously been a huge part of defining your career. And you’re not even old.

Can that please be the headline?

I’ll keep it in for sure. But this role, by the way, will follow you for the rest of your life. You will be forever associated with her. Is that daunting?

I mean, I think it’s exciting. It’s very exciting to craft this original character and see her thriving among all the major DC players. Crisis [a storyline that crossed over on The CW superhero shows] was so crazy for me. To watch it and see Dreamer, the first trans superhero, up there with Batwoman and Supergirl and The Flash. That was so cool. So I’m excited to have this character follow me. I’ve had so much fun. And I’m so attached to the character personally. I’m protective of her. She’s my baby.

That’s wonderful. You’re an actress who specializes in playing characters with extraordinary gifts. I want to ask about another character you played in a film called Bit.

It’s a cheeky, fun comic book horror film that you carry as the lead. You were nominated for Best Performance at the Queerties. I hope you are aware…

Yes, and I was so shocked, first of all, because it’s a genre film. So often, genre films don’t thrive in that kind of environment.

It took me by surprise at Outfest last year. I talked to Brad Michael Elmore, the director.

He’s one of my favorite people ever. He’s so smart and talented. He did such an amazing job writing this script. It’s so special. He’s very aware—and will be the first person to say–”I’m not the person who should be telling this story. I’m the straightest, cis guy out there. But I don’t see anyone else telling this story, so I’m going to.” And he did. He’s using his platform and privilege to lift people up. And he did a f*cking cool movie starring queer women.

We had a female DP, which is huge. The whole movie was so amazing. The script was brilliant. Instantly, reading it, I fell in love. I hope people get to watch it soon. It’s just cool.

It’s cheeky fun. It’s kind of a female version of The Lost Boys, and I really related to the characters.

So it’s your first movie.

My first and only movie. I’m always on the phone with Brad. “Bradley, when are we making another movie? I’m getting bored.”

So was it intimidating carrying the whole movie your first time out?

Terrifying. Dreadfully terrifying. I don’t know if anyone knew this, but I have no idea what I’m doing up here. I don’t have formal acting training. I’m not a Julliard actor. I haven’t been doing this for years. I show up and it’s like playing dress-up, you know? And on Supergirl too, I’m acting with juggernauts. It’s my first major [job] and I’m doing scenes with David Harewood. Cool, no pressure.

I have to live up to something. I have to keep up with that. All of it is very scary. With Bit, trying to keep up with Diana Hopper and James Paxton. Most of my scenes are with them, and they are both so phenomenal. Acting is the most terrifying thing I’ve ever had to do. I have virtually no control over anything. I just try my best. And I’m really happy with Bit, and the response has been better than any of us could have asked for.

It was supposed to be coming out soon, but the virus sort of threw that. I hope people get to see it soon, and I hope they get to see it in theatres.

It’s a film that I think will have a following. When I talked to Brad, he mentioned that he had read your book and consulted you doing research for the part. Then he decided he should cast you in the lead.

Were you at all reluctant to appear in a very queer film written by a cis straight man?

I didn’t really think much of it. The writing spoke for itself. It was phenomenal, well written, well researched. He’d talked to trans folks and read books. He knew what he was writing; he’d done his research to make sure it’s done well. And he made a movie where the trans character, like Nia, where her transness is not the only interesting thing about her. Brad knew: queer people are more than who we sleep with or where we use the bathroom.

I found that very refreshing.

Well, and I’m not sure I should say this, but I did tell Brad: the first time I saw the movie I didn’t even catch that she was a trans character. I just thought Laurel was a woman played by an actress who happens to be trans, and that was it.

And that’s the beauty of it. It’s not something a lot of people are going to catch unless they’re looking for it. You catch it in certain places. It is there, and if you know to look for it, you understand. But otherwise, it’s not really pertinent to the situation. When we first meet her, with Laurel driving to Los Angeles, she’s passed a point in her life where her transness is her biggest issue.

I love it. When I talked to Brad, it was obvious he had this world very defined in his mind. Have you talked about doing another one? He hinted…

Yeah. It’s a possibility. Of course, I’m like yes, let’s do a trilogy. I want Bit Part II. I want to do all the movies. I have a running joke with him and James that Brad will be like 80 in a wheelchair, and James and I will be in Bit 16. We’ll never stop.

It worked for Star Wars.

I think it has the makings for a sequel, but first we need it frigging released.

So what else do you have coming up? I know Supergirl is coming back for Season 6. Are you part of it?

I believe that I can say I am, yes. I’m not going anywhere. 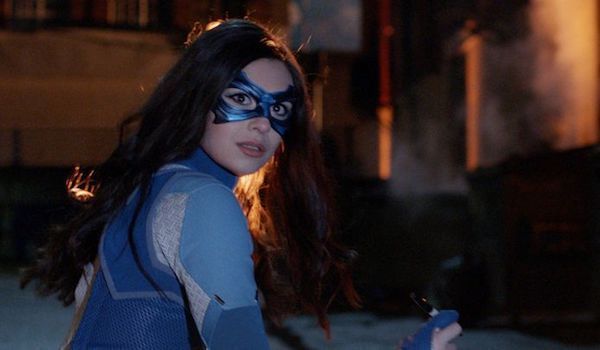 Beyond that? Other movies?

My life has just been Supergirl and Bit the past couple years. It’s funny: I see other folks doing other projects while they’re a regular on a series. And I’m like how do you have the time? It’s all I can do to get a night’s sleep. So right now it’s Bit coming out and Supergirl Season 6. I talked to the showrunner, and he told me what the plan is. I’m really excited. It’s a cool concept.

And I’m sure you can’t tell us what that is.

I can’t say anything.

Stay indoors. I feel like this could all be over sooner if people would just. Stop. Going. Outside. For stupid reasons.

Supergirl airs Sundays on The CW.