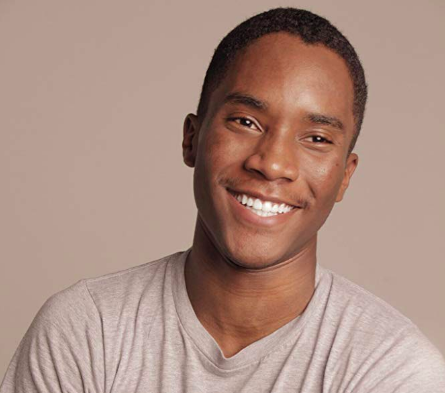 Brett Austin Johnson is an up-and-coming queer actor who just made his cinematic debut in the romantic drama “Five Feet Apart,” which tells the story of two teenagers struggling with cystic fibrosis who meet in a hospital and fall in love. Since it’s premiere last month, the film has grossed over $52 million at the box office.

“This project was like diving in the deep end because this was my first cinematic supporting role,” the 21-year-old tells Queerty. “It’s actually kind of weird to watch the film now as such a heavy story because we were such goofballs in between takes.”

Queerty had a chance to chat with Brett about the film, as well as his experiences as a young QPOC in Hollywood, straight actors playing gay roles, and the one thing very surprising thing nobody knows about him.

Check out what he had to say…

“Five Feet Apart” premiered just a couple of weeks ago and is quite the tearjerker. How was it working on the project?

I did cry the first few times I read the script. This project was like diving in the deep end because this was my first cinematic supporting role. Our director Justin Baldoni and his wife, fellow actor Emily Baldoni, have some of the most beautiful souls I’ve encountered.

Working with such talents as my co-stars, Ariana Guerra and Cole Sprouse, are experiences that will set the tone for my entire career. They are genuinely kind and witty people with captivating energies that cannot be ignored.

On a film set like that one, I didn’t have to filter myself. Amazing people made this project what it was for me. It’s actually kind of weird to watch the film now as such a heavy story because we were such goofballs in between takes.

I’ve been receiving a lot of messages from young queer people who really admire the authenticity with which I navigate life. Some are young actors who just want to know how to be authentically themselves while having thriving careers.

Being able to affect one’s community positively through the art created is almost every artist’s mission. I’m extremely grateful for what’s been invested in me and the opportunity to invest in others.

Above everything else, I am proud of the work that I’ve done. I look back at how far I have come and I am content. That feeling then energizes me to look forward towards my future career filled with hard work and struggles, grit my teeth, and smile. In this type of work, where you’re self reliant so much of the time, it’s important to take a moment to check in with yourself. Don’t get me wrong, it’s amazing to receive adoration, but can you generate it from within yourself?

There’s been quite a bit of talk recently about queer representation in film and TV, specifically over whether straight actors should play LGBTQ roles, or whether those roles should be reserved for LGBTQ actors solely. What’s your take?

This is a serious discussion that is happening all over hollywood so I’ll watch my words and only speak on my experiences.

I think that every situation or project is subjective and should be critiqued by the producers on a case by case basis. With that being said, in this film I played an openly heterosexual role. If anyone every told me I couldn’t play a heterosexual role because I’m queer, we are putting on gloves and getting in the ring immediately.

The essence of an actor is the varying ability to “become.” If society starts putting more parameters on what or who we can become it will hurt the art form. On the other hand, some roles and projects absolutely require an authentic queer experience from a queer actor.

If we reserve LGBTQ roles for LGBTQ actors, it will give more queer actors opportunities. It would also withhold from us creations like Ezra Miller as Credence Barebone or Timotheé Chalamet as Elio Perlman, and is that a world we want to live in?

I think we’re learning it’s not good enough to just feature queer people as an accessory in any particular project. Representation for me, means a variety of different stories from a variety of different perspectives, not the same story with different perspectives or different stories from the same perspective. It cannot be a production line like other industries, to just pump out project after project. Hollywood is learning to accept that. Icons like Ryan Murphy, Lena Waithe, and David Rappaport have been some of the most visible pillars of this change and dedication to strong storytelling. I see things improving on an exponential trend from here, so buckle your seatbelts kids!

went to church this morning and fed my soul. i was really hungry

What is one thing about you that nobody knows but would be surprised to learn?

(Laughs) I’m a 21-year-old virgin! I wave my virgin flag proudly because we virgins are out here by choice!

Being a virgin does not mean you’re scared. It does not mean you aren’t accepting of your sexuality. It usually just means you haven’t found anyone with which you want to share yourself, and that is absolutely fine.

My standards are particular to me. I want to be best friends with the person I fall in love with before sexual physicality begins. I get it, sex is great, but you have to know yourself. I have so much to give my communities, I want to be a great father, and I am going to rock my husband’s world when I find him.

Until then, both he and I have a lot of work to do!