Brian Michael, 34, an actor who recently appeared on OWN’s Queen Sugar, has publicly come out as transgender

In the episode, which aired on Wednesday, Michael plays Tonie Wilkins, a police officer who has a confrontation with the show’s lead character, Ralph Angel Bordelon (Kofi Siriboe). Michael interrupts Siriboe as he digs through a trash can for his son’s favorite doll.

“When I saw the breakdown for Toine, I felt this was the role I was looking for,” Michael told GLAAD. “It was a dream come true in so many ways.”

“Because I began my career post-transition and am not ’visibly trans,’ I had the privilege of choosing to disclose or not and I was able to go in for any role that fit my type,” he said. “I knew that at some point I would want to explore my trans experience in my work, but I wanted to make sure my self-understanding and skills were sharp enough to do justice to this deeply personal subject.”

In the past, Michael has only performed in cisgender roles. His credits include Blue Bloods, Girls, Person of Interest, Gossip Girl and The Detour. 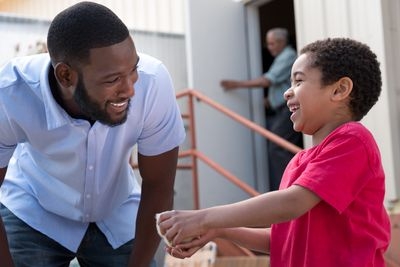 “As I kept working, learning about myself, and resolving issues I would uncover in therapy, I became more comfortable with bringing my more challenging life experiences into my work, and I wanted to start exploring my trans experiences.” Michael started searching for trans roles that might let him do that, but says “there weren’t many.”

Then the Queen Sugar script popped up. The episode is called “Caroling Dusk,” and Michael said he knew it was the chance he’d been hoping for.

“I loved that this scene was about gratitude and friendship, and that Toine being trans was just a part of their story, and not the focus,” said Michael. “Working on this scene inspired me to do this in my personal life. To reach out to a few of my oldest friends and thank them.”

Now he’s hoping more roles like this one will come along.

“I want to continue to take on any roles that resonate with me and that allow me to challenge myself as an artist and impact audiences,” Michael said. “I’m happy that I am working at a time when there are roles like Toine being written. At a time when writers, producers have been open to the input of trans artists and advocates and are holding space for full and authentic trans narratives—and reaching out for trans actors for these parts.”