The actor, 35, took to social media during Bisexual Visibility Week.

He shared the messages in postings to his Instagram stories on Sunday.

“Last week, I was chatting with work friends, and as I brought up a trip I’d taken with an ex-girlfriend, I asked myself —for the ten-thousandth time— how to tell such a story without making it seem like that was the whole story of me,” Arnaud posted. 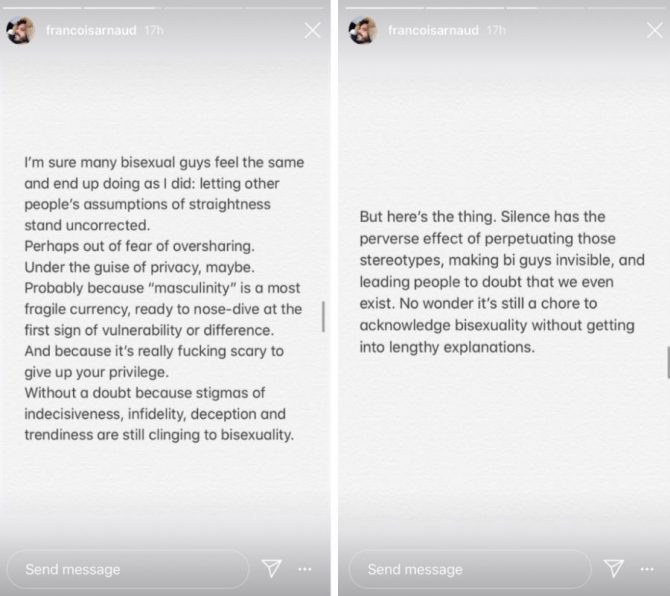 “I’m sure many bisexual guys feel the same and end up doing as I did: letting other people’s assumptions of straightness stand uncorrected,” he continued.

“Perhaps out of fear of oversharing. Under the guise of privacy, maybe. Probably because ‘masculinity’ is a most fragile currency, ready to nose-dive at the first sign of vulnerability or difference. And because it’s really f**king scary to give up your privilege. Without a doubt because stigmas of indecisiveness, infidelity, deception and trendiness are still clinging to bisexuality.

“But here’s the thing. Silence has the perverse effect of perpetuating those stereotypes, making bi guys invisible, and leading people to doubt that we even exist. No wonder it’s still a chore to acknowledge bisexuality without getting into lengthy explanations.

“So yes, labels are frustrating and words imperfect. But I’ve always considered myself bisexual. Not confused or trying to look edgy. Not disloyal. Not ashamed. Not invisible.”

He ended by wishing everyone ‘Happy #bivisibilityday this Wednesday’.

Arnaud was born in Quebec. He’s best known for his performances in The Borgias, Blindspot, and Midnight, Texas. Many might also remember a notable cameo he made in Schitt’s Creek, playing an ex-boyfriend of David Rose called Sebastien who arrives in town to do a photoshoot with Moira.