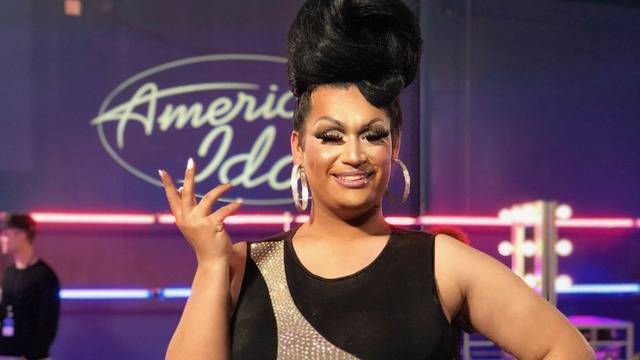 Who She Is: Drag Queen & Singer

Why She Matters: In 2018, Ada Vox became the first ever American Idol contestant to audition and enter the competition as a drag queen and make it to the top ten. Throughout her run on the show, Vox performed in her drag persona to wide acclaim.

Sorry this is a late post, but I had such a great time kicking off LA Pride at the @Queerty #Pride50 party last week! Thanks to @Netflix's ALEX STRANGELOVE, @svedkavodka, and @thetrevorproject for an incredible evening. Happy #Pride!

Why We’re Proud: Vox may not have received the most votes on the 16th season of the reality TV staple, but that doesn’t mean she didn’t win. Vox’s rousing renditions of pop standards like “Creep,” “Feeling Good,” “Lady Marmalade” (a duet with the song’s original songstress, Patti LaBelle, no less) and “And I’m Telling You I’m Not Going” earned her a legion of fans who term themselves “Voxies.” Moreover, her fashion sense and considerable vocal range earned her drag superstar status and launched her on a professional singing career.

I want to say thank you all so, so much for the love and support on my journey! My American Idol journey may have come to an end, but the real competition begins now. From here, it's all a competition to see who will really climb to the top! Please remain respectful to the remaining contestants. They have all earned their spot and we all have the same dream. You will be seeing much more of me VERY soon. #Voxies #TeamAdaVox #CircleOfLife #AmericanIdol

Vox’s competition was a personal triumph. Having undergone brain surgery at age 8, Vox developed a passion for music as a means of recovery. That continued into adulthood when she developed her Ada Vox persona as a vehicle that gave her the freedom to sing anything she loved.

The entire 16-year tenure of American Idol has seen only a handful of openly queer contestants, several of whom opted to stay in the closet while on the show (Clay Aiken). That a drag queen could suddenly become a breakout contestant on the show marks a new level of acceptance.

As she told People:

It’s been quite a journey. If I had come back this time around and received this much hatred and hadn’t grown the way that I have, I could’ve been in some big trouble. But I’ve come a long way in the development of myself and as an entertainer. I have a much bigger skin this time around. I’m not afraid to hear the hate. It can bounce off of me and I can use it to build myself up.

Maybe it goes without saying, but Ada has also endured her share of haters. Homophobes trolled her throughout her Idol tenure and–even though as Adam Sanders he identifies as a gay man–she’s encountered transphobic attacks as well.

For her part, Vox says the attacks have given her a new level of sympathy for transgender people:

It makes me feel for the people who live their everyday lives fearing harassment. All the hate that I’m receiving is so much weaker than all of the love that I’m getting. So for every one person that hates me, I have one thousand people saying they love me.

We applaud Ada Vox for her fabulous drag glamour, her role modeling how to be yourself no matter the obstacles, and for her rousing renditions of some of our favorite songs around the globe, including at Queerty’s LA Pride Kick-Off Party…