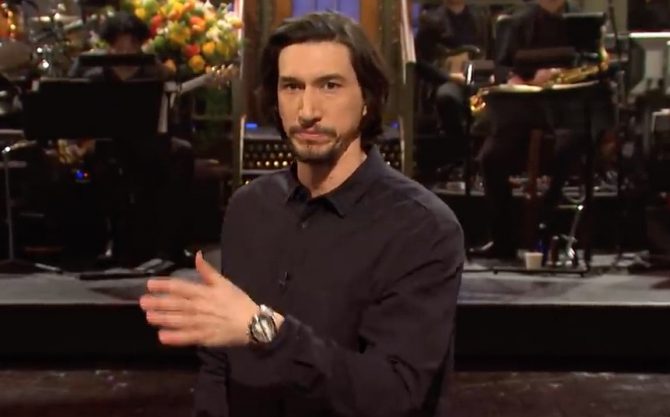 If you’re a fan of Adam Driver’s brooding intensity, you probably enjoyed his recent hosting gig on Saturday Night Live. But a line during his opening monologue, interpreted by the live audience as a joke, is now making fans wonder — was a transphobic skit really slated to close out the show?

It’s tough to say, but the evidence could point to the possibility that a sketch was cut from the close of the show due to time. The episode ended with musical guest Halsey’s second performance, which breaks from the typical run of show.

And then there’s Adam’s monologue, which taken at face value, says outright that the mystery sketch made the host uncomfortable.

“I’m just trying to drag this out because honestly at the end of the show, there’s a sketch I really don’t like, so I’m hoping this goes long and it’ll get cut,” he said, adding: “I play a woman in it, and I can’t tell if it’s transphobic or just really dated.”

The comment got a laugh from the audience, as it fit in with the monologue’s overall theme.

You can watch it below. The remark comes at the 3:52 mark:

Many viewers praised the move:

wait did Adam Driver really try to extend his monologue on SNL so they'd have to cut a sketch he thought was transphobic? king shit

Adam Driver dragging out his opening monologue on SNL to avoid performing a transphobic sketch at the end of the show is why I love him.

While others were less convinced:

The joke in Adam Driver’s SNL monologue about him not wanting to do a transphobic sketch is both 1) a joke and 2) a shitty joke, because it’s the show absolving itself of all the shitty transphobic stuff it has done by making a winky acknowledgement rather than apologizing.

Still… we find it odd that the episode ended with a musical number instead of a sketch.

Then again, Driver’s monologue clocked in at a very average 5 minutes — here’s a rundown of the last five opening monologue lengths:

And to that end, why would he wait until air time to voice his reservations if he felt that strongly about it?

What do you think? Was it a joke or did Driver really vamp to cut a sketch?