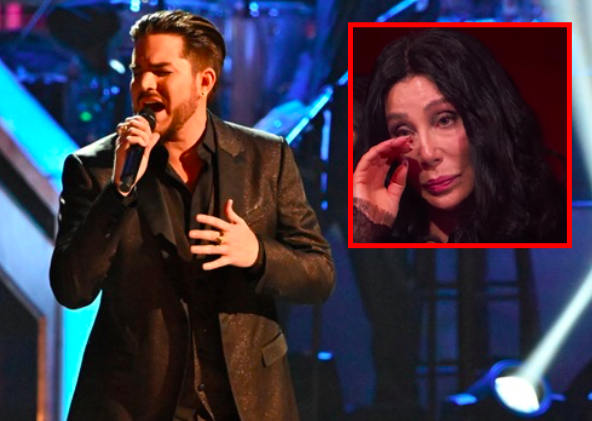 Adam Lambert left the whole room in tears with his emotional cover of Cher‘s “Believe” performed at the 2018 Kennedy Center Honors, which aired last night on CBS.

Seriously, the whole room. As well as living rooms across America.

Adam Lambert sang that song like the love of his life just left him before he walked on stage. He was amazing BRAVO #KCHonors #KennedyCenterHonors pic.twitter.com/tB9To0jeLb

Is there a genre @adamlambert can't interpret or has one not been invented yet? #KennedyCenterHonors

.@adamlambert's incredible version of @Cher's "Believe" on #KennedyCenterHonors is proof that all of those of us who obsessed about him on American Idol can say, "We told you so." So there.

The 41st annual celebration of the arts was held on December 2 and hosted by Gloria Estefan. It aired last night on CBS.

In addition to Cher, the 2018 Honorees included none other than country music superstar Reba McEntire, composer and pianist Philip Glass, jazz saxophonist and composer Wayne Shorter, and the three co-creators of the hit Broadway musical Hamilton.

Performers from the night included Cyndi Lauper and Kelly Clarkson among others. But it was Adam Lambert who stole the show and left everyone, including Cher, speechless.

Tried 2 write Feelings About Adam Lambert Singing
Believe In Words,but Cant seem 2.When Your senses are Overwhelmed All Can you feel with your ??.
I Was Shocked AND Over The MOON When Cindi (Lauper) came out Rocking the house.
Shocked Because SHE TOLD ME SHE WAS IN LA,