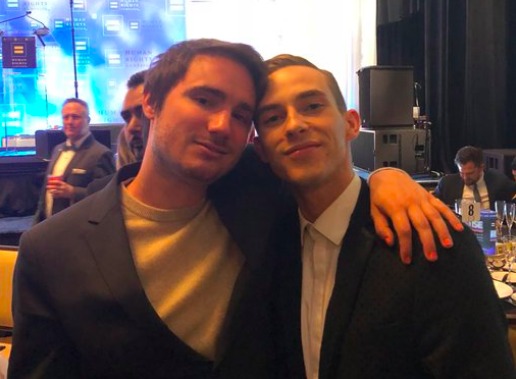 Well, it has occurred, folks.

Adam Rippon finally met up with Sally Field’s son, Sam Greisman, and there are pics to prove that it, indeed, happened.

The two guys took a selfie together at the Human Rights Campaign gala in Los Angeles over the weekend, where Rippon was presented with the group’s coveted Visibility Award.

Greisman tweeted the selfie along with the caption: “Thanks, mom.”

As you might recall, Sally Field tried playing matchmaker between her son and Adam during the Olympics after Sam expressed his fondness for the figure skater.

Gonna need a gif of @Adaripp saying he just wants to focus on being America’s Sweetheart for my daily use. Please and thank you.

Glad so many people liked this, but if you could slide it into Adam's DMs that would be great too.

That’s when Sally stepped in with some motherly advice, which Sam then shared with his Twitter followers:

Just some really helpful advice from my mom on how to deal with my Olympic crush. pic.twitter.com/shYCXwNOMf

And after Sam posted the text exchange, Sally tagged Adam in the comments to make extra sure he saw it:

When asked in PyeongChang about the whole thing, Adam responded by saying “Sally. SHE BOLD.”

He also had a message for Sam: “Sam, your mom – I admire her. And I’m sure one day we’re going to meet! So thanks, Mom.”

And so, at long last, it has happened.

Related: Adam Rippon has put “hundreds” of Olympic condoms to good use