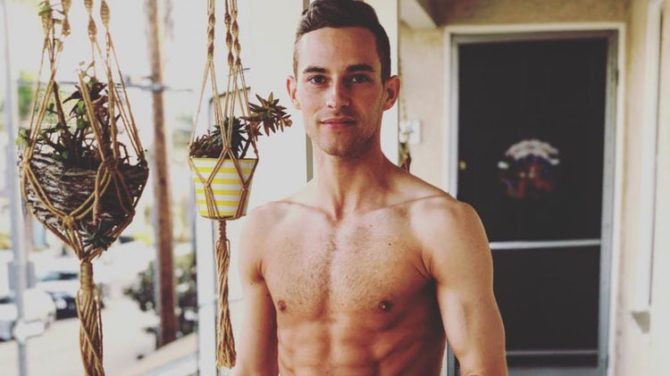 Just to recap: Adam told Ellen he’s been “sleeping on” Shawn Mendes, he stole the Oscars pre-show with some Jeremy Scott harness couture, and he spilled a bit of room-temperature tea on WWHL.

He also won a medal for something recently, but the specifics escape us. Hold on… it’ll come…

Let me think about it ?

Now within the prestigious folds of the New York Times, Adam opens up about everything from his Olympic retirement to online trolls to hookup culture at the Olympic Village.

And since it’s that last item that brought you here, let’s start there.

Asked point-blank, “Is the Olympic athletes’ village really like a hotbed of sexual Tinder, Grindr, everything?”, Adam replied:

“Here’s the thing. The condoms aren’t special. The reason that they go through so many is because people like me take maybe 400 of them and I have little gift bags for my friends. They’re just like Korean — it says latex condom, but in Korean. But you know what, when you’re in a high-pressure situation and there’s like beautiful people all around, yeah, emotions get going.

But as somebody who’s 28, I’m not about to find somebody, try to sneak around five different roommates, lock a door and go through all of that. I’ll let young kids have this sexual camp experience here at the Olympics. I’ll just sit back, I’ll wait, and I’ll figure it out when I get home.”

Factoring in the freezing temperatures outside, we can understand why some athletes (say, the older crowd in their late 20s!) would opt to stay in bed rather than run around like teenagers. And considering how many Olympic athletes are teenagers or in their early 20s, it also makes perfect sense that it’d be a hormonal petting zoo after dark.

This is a shot from my shoot with @GQ – I’m sitting in a Kohl’s parking lot bush. With the lights from the Taco Bell next door twinkling in my eye, @ryanpfluger has never made me feel more beautiful.

Since Adam sadly didn’t elaborate on that “figuring it out when he got home” part, here’s some more of what he had to say:

On being contacted by closeted athletes at the Games:

“I heard from a few athletes actually when I was in Korea, and they asked me about my experience. I think everyone’s circumstance is a bit different. For me I found that I was a lot more confident in who I was after I came out publicly. When I was coming out, I read a lot about other people’s coming-out stories. I really felt like they made it so normal and it wasn’t a big deal and that their life still went on.”

On growing up gay in the skating world:

“In skating, I think it’s taboo to be gay. I know when I was younger I tried to be everything but gay. Everyone calls you gay when you’re young: “Oh you skate, you’re gay.” You’re like, “No I’m not!” But inside you’re like, yes you are, you’re very gay.”

You can find the full interview here.