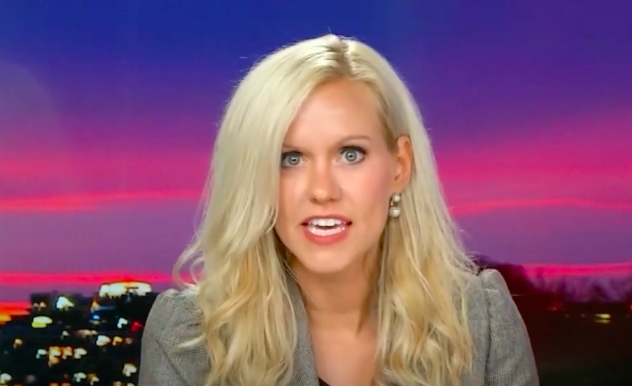 Last week, Republicans in New Hampshire picked a “transsexual Satanist anarchist” whose campaign slogan was “F*ck the Police” to be their nominee in a local sheriff’s race.

This week, Republicans in Delaware selected an admitted ex-drug-runner and racist flat-Earther to be their nominee in the race for U.S. Senate.

Lauren Witzke is a former field organizer for the Trump campaign. This week, she won her primary with 56.9% of the vote.

Witzke campaigned on a platform that included a 10-year moratorium on all immigration into the United States, forcing rape victims to have babies, and diverting welfare payments to “married couples with three or more children” as a sort of reward for procreating in a Biblical way. (Witzke’s plan specifically states that funds would only go to couples who “have children together,” effectively cutting out LGBTQ couples.)

Now, a new exposé published by The Daily Beast finds that she’s even more awful than people first believed. Because, as it turns out, Witzke has a history of elevating QAnon conspiracy theorists and making racist remarks online.

With her victory still just hours old, the newest Republican Senate nominee publicly thanked a white nationalist leader who marched in the “Unite the Right” rally and has questioned the number of Jews killed in the Holocaust…

…Witzke has posted racist messages of her own on social media, calling Reps. Alexandria Ocasio-Cortez (D-NY) and Ilhan Omar (D-MN) “third world” and “tards.” Witzke has also more or less endorsed the idea of Trump becoming a lifelong king of the United States, and said she believes that the earth is flat.

She also has quite the rap sheet.

In August 2017 Witzke was arrested in Tennessee on a series of charges. The newspaper noted that a woman named Lauren Witzke had been arrested on violating both heroin and methamphetamine laws, charges of driving under the influence, resisting arrest, and introduction of contraband into a penal facility.

Slate adds that Witzke first became addicted to drugs after suffering a bout of depression while working for a pharmaceutical company. She started taking painkillers, got addicted, and eventually switched the heroin.

At some point she became wrapped up with drug cartels.

Speaking to WDEL radio in May, Witzke said: “I ended up in a situation that I never thought I’d find myself in: I was running drugs, actually, for the Mexican cartels.”

After seeing the light, Witzke got clean and decided she needed to run for office to fight against these dangerous criminals who “sell these drugs to American children” and will “not think twice if it will kill them.”