June is National Alzheimer’s & Brain Awareness Month, and as the LGBTQ population ages, the epidemic is increasingly striking close to home.

Phil Gutis, a retired communications manager for the American Civil Liberties Union, married his partner of 13 years, Tim, last fall after being diagnosed with the degenerative disease. He had never planned marriage, but his diagnosis made him realize how important it was to savor the moment, rather than live for a tomorrow that may never arrive.

Phil was kind enough to share with Queerty some photographs and thoughts on the intimate moments of his diagnosis, marriage and advocacy. 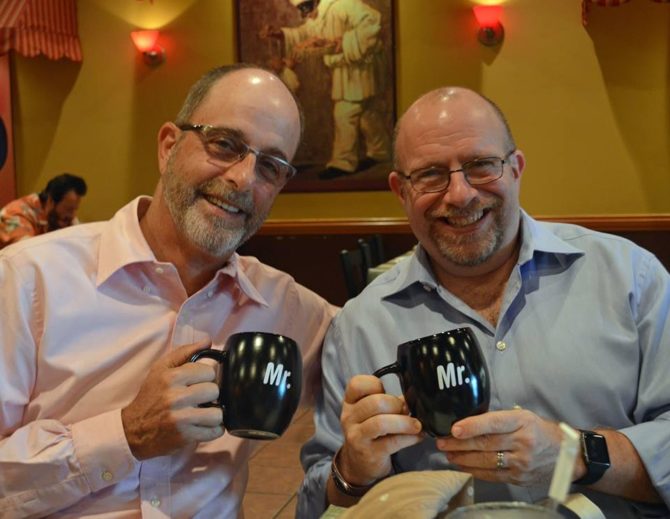 My husband, Tim, (left) and I proudly display the “Mr. & Mr.” mugs given to us at a celebratory lunch following our wedding ceremony that day. After 13 years together, Tim and I decided to get married last fall following my Alzheimer’s diagnosis (Tim and I met online through a dating site many moons ago). The diagnosis made me realize the importance of living in the moment and appreciating what I have rather than what I may lose to the disease.

When I got in the car with Tim to leave following my diagnosis, the tears began to flow and the full likelihood of what we would face began to set in. It was a somewhat ironic moment: Although I furiously believed that gays and lesbians should have the right to marry — I had, in fact, spent 15 years working at the American Civil Liberties Union, many of those years advocating for marriage equality — I myself never really wanted to get married. My diagnosis changed my feelings about marriage. I knew that there were going to be important medical, financial, and other life decisions that needed to be made, and I didn’t want to make them alone. I loved and trusted Tim and wanted his help.

It often seems that gay life is all about youth and partying. That’s the glamorous stuff and understandably it gets all the ink, real and virtual. But take a peek at the wedding pages of almost any mainstream paper and you’ll see that gay men and women are increasingly public about their decisions to settle down with the person they love. When you get married or make another form of commitment, you are generally promising, as the typical wedding vows say, to love and care for your husband or wife in sickness and in health, in sorrow and in joy, so long as you both shall live. That’s where all the stuff about aging resides. And before agreeing to marry or otherwise commit to another person, folks should definitely think long and hard about that part of the vows. Because one thing that we can guarantee as we age: it isn’t always going to be easy, and my marriage is living proof of that. 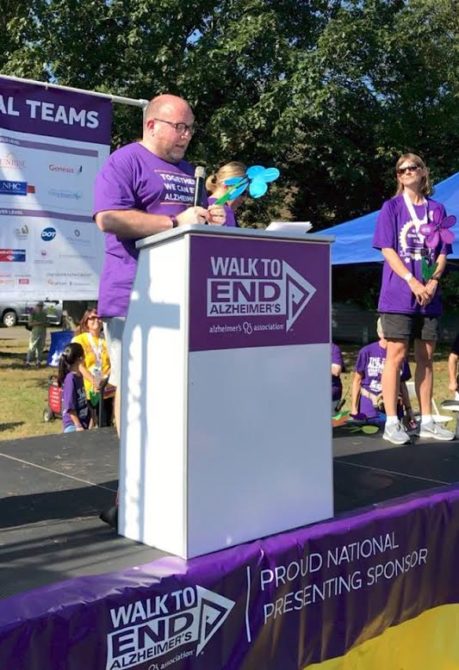 I was diagnosed with early-onset Alzheimer’s two years ago, at age 54. I had long been worried about memory lapses and big vacant holes where my recent memories should live. I had tried dismissing these lapses, attributing them to getting older and the stresses of work. My sister shared with me an online advertisement looking for people concerned with memory loss for a drug trial. I called the number, passed the initial screenings, and was brought in for additional testing, including a cognitive assessment. I scored a 71 — well below the 85 or less required to be admitted to the trial. The director of research for the trial let me know that there was likely something seriously wrong and I could be facing a diagnosis of early-onset dementia or Alzheimer’s. A series of tests and brain scans later confirmed my worst fear — Alzheimer’s disease.

The diagnosis was jarring, and there were long months of deep sadness and overwhelming fear. But I quickly decided that I would do everything in my power to fight this disease – for myself, and for the more than 5 million Americans living with Alzheimer’s and other dementias. Part of my fight to end Alzheimer’s has been speaking and participating in the Alzheimer’s Association annual Walk to END ALZ. 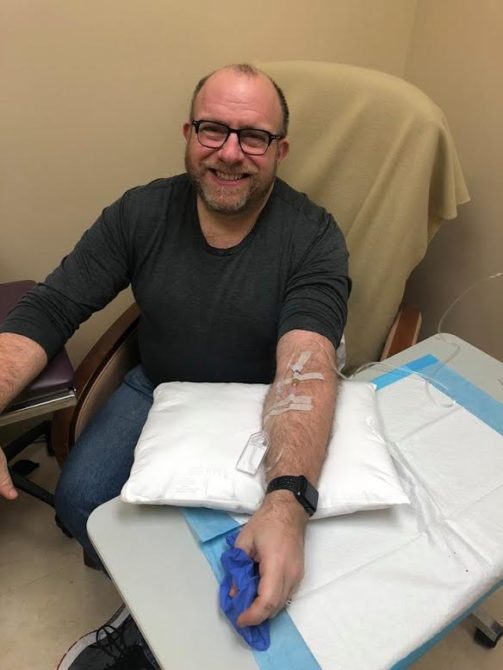 Currently, there is no cure for Alzheimer’s, nor are there any treatments to prevent, reverse or slow the progression of the disease. However, by enrolling in a clinical trial, you can help accelerate progress and provide researchers with valuable insights. Shortly after my diagnosis, I decided to enroll in a clinical trial for an investigational treatment. 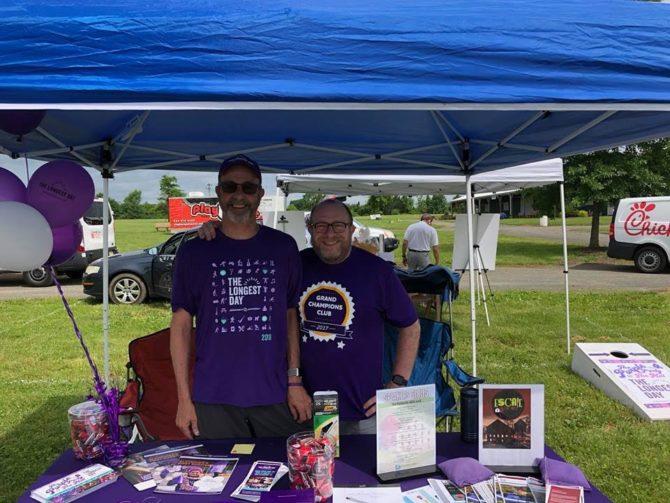 June is Alzheimer’s & Brain Awareness Month, a time dedicated to increasing awareness of Alzheimer’s disease and available support. Following my diagnosis, Tim and I started participating in The Longest Day – an annual fundraiser on the Summer Solstice (June 21) during which you perform an activity you love – or an activity loved by those affected by Alzheimer’s – from sunrise to sunset to raise funds and awareness for Alzheimer’s care, support and research. Joining the fight against Alzheimer’s through activities such as fundraising has given me a sense of renewed purpose in my own journey with the disease. 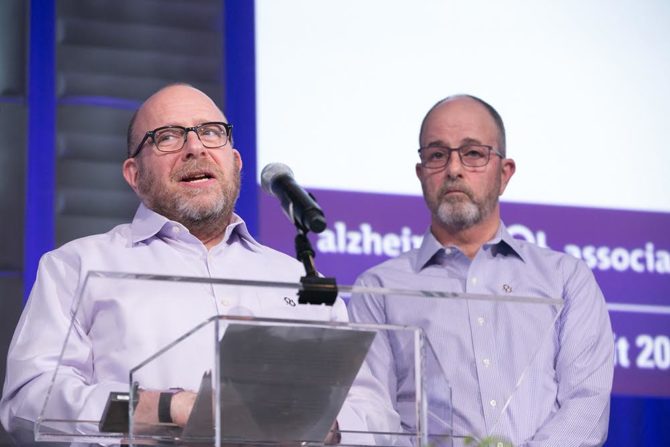 Taking action brings us closer to a world without Alzheimer’s, which is why Tim and I have both been so passionate about being vocal and sharing our story. Tim accompanied me on stage for a speech at the Alzheimer’s Association Leadership Summit, and he’s been at my side every step of this journey. I know he’ll continue to be there as I face the changes that have already taken a toll on my psyche and ability to move successfully through the world. 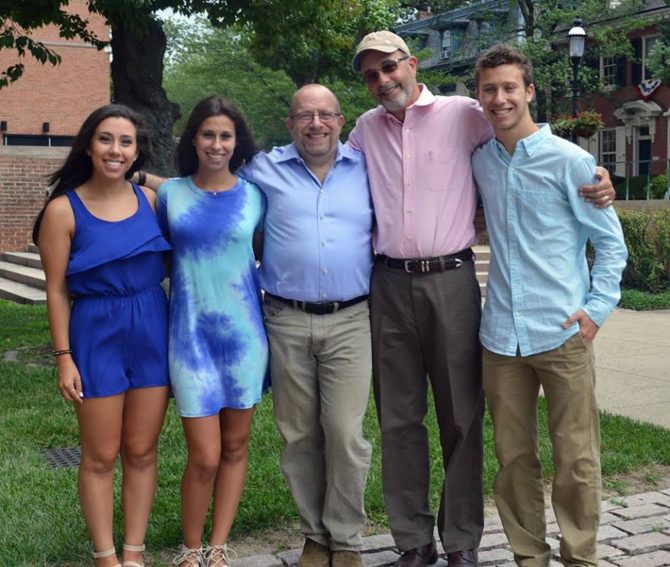 My diagnosis changed my feelings about marriage. I knew that there were going to be important medical, financial and other life decisions that needed to be made, and I didn’t want to make them alone. I love and trust Tim and wanted his help. So, we made an appointment with the Bucks County Clerk in Doylestown, Pennsylvania, and showed up for our big day.

My sister, nieces, and nephew all arrived to surprise us and serve as witnesses.

We exchanged our rings — bought hastily at a flea market the day before (we forgot!). We capped the day with a celebratory lunch at a nearby Italian restaurant, before returning to our quote-unquote “normal” life, which has been anything but.