Police in Mexico would not have suspected that the discovery of a bloody Range Rover near Rosarito Beach would lead to a trail that included an adult film performer, an elusive Texas millionaire, and murder.

A new expose by The Daily Star reveals that law enforcement discovered the body of Jake Merendino, 51, on May 2, 2015, inside the aforementioned Range Rover. An unknown attacker had stabbed Merendino more than 20 times and cut his throat so deep, his head had almost come completely off his body.

An investigation by the police revealed that Merendino had earned a fortune in his native Texas playing the real estate market. It also revealed that he had begun vacationing in San Diego, where he first came into contact with David Meza, 23, an escort and sometime adult film performer that operated under the name Mario Romo. Merendino was smitten and began a two-year relationship with Meza that also included expensive gifts, vacations and cash payments.

Little did Merendino know, but Mezza actually had a girlfriend on the side. Meza had started dating Taylor Langston at age 16, and the two had gotten engaged. Langston was also pregnant at the time of Merendino’s death. In subsequent interviews, Langston claimed she knew about Meza working for Merendino, though the escort led her to believe he only worked as a bookkeeper. Langston also didn’t know about Meza’s double life as a sex worker.

The setup came to a head in 2015 when Merendino purchased a beachfront condo near Rosarito Beach in Mexico. He told Meza he loved him, and wanted to share a life together. On the same trip, he even scrawled a makeshift “will” on a hotel notepad, leaving his entire fortune to Meza in the event of his death.

That death would come sooner than expected.

The evening of May 1, Meza left the hotel room he shared with Merendino to head back to San Diego. Later that night, Merendino told hotel staff that a friend was stranded by the side of the road. Merendino drove off into the night, never to be seen alive again.

The next morning, Meza and Langston returned to the Rosarito Beach hotel he’d shared with Merendino to collect some belongings. Those included $15,000 diamond Rolex watch, an iPhone, iPad and laptop. To prove his right to the property, Meza produced the handwritten will. 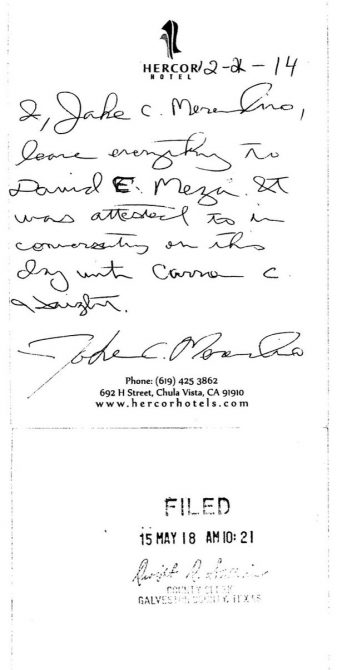 The hotel staff called the police instead. Officers questioned Langston and Meza in connection with the murder. Meza first denied seeing Merendino the night of the murder, but later changed his story to say that the two had met by the side of the road. Meza further claimed that he’d left Merendino alive and unharmed at the scene.

Ultimately, investigators decided to charge Meza with murder. A jury later convicted him, sentencing him to life in prison.

Taylor Langston would also serve time in prison herself for lying to police.

The case of David Meza and Jake Merendino would land in the headlines again in 2019 when the case became the subject of the documentary A Lie to Die For on the Oxygen network.