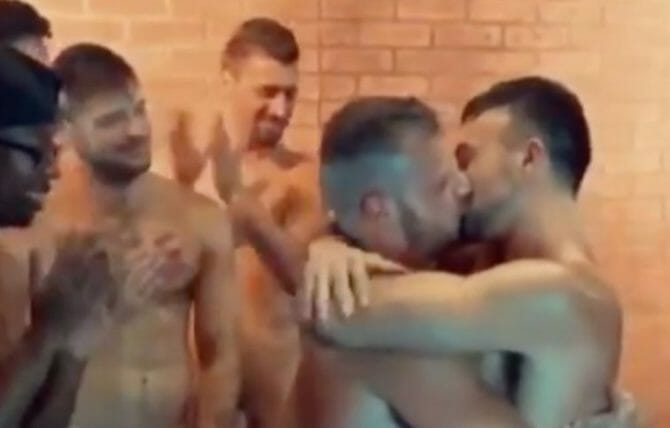 When Brian Bonds popped the question to his boyfriend Mason Lear last month, he came up with a truly original idea.

Both adult film performers, Bonds asked for Lear’s hand in marriage after filming a group scene together, with the cameras still rolling. Aww!

These aren’t engagement photos, but for now they’ll work. Teehee!

In a new interview with Gay Star News, the happy husbands-to-be opened up about the widespread attention the stunt attracted, as well as where their lives are headed now.

“It was mostly surprising to me that news like this caught this much attention on the internet. I mean, friends – gay AND straight…as well as strangers, were showing me social media posts and news sites covering the proposal in countless foreign languages even,” added Lear.

As is usually the case online, social media reaction was a mix of positive, negative and downright trolling.

The couple remains unbothered, focused instead on how much it meant to them.

Yeah Vegas tower just ain’t the same. Lol So happy to be here with this one.

“It’s not only work, but it’s an industry that I truly love and have made a ton of friends through. Same for Mason.

“I figured proposing at the end of a RFC gang bang would be… well, just right for us.”

While Lear’s family has not seen the video (probably for the best), he added: “My mom was really happy to hear about my engagement.”

First Temptation Sunday of the year. I’m glad I could be the one to take my babe to his first one.

Looking down the road, Bonds revealed that he’d “love to have kids.”

“That’s my last goal in life – to have kids and pass down my knowledge and experience to an offspring.”