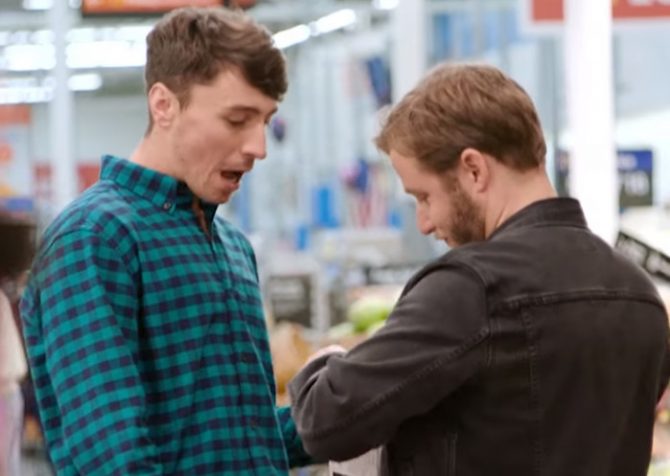 Proving that the corporate behemoth has moved into the 21st century, Wal-Mart has just released a video featuring two gay men falling for each other after discovering a skillet in the retail giant. And the American Family Association has already lost its mind.

The video, titled Love Is In the Aisle: A dating show at Walmart features two gay men, Pat and Andy, set up on a blind date to go shopping at Wal-Mart. The two bicker and flirt until they decide they like each other after bonding over their shared love of an iron skillet. Given that the video depicts their relationship as sweet and healthy, the AFA has gone predictably berserk.

Tim Wildman, President of the AFA, sent out an immediate alert to the cabal’s members to encourage them to complain to Wal-Mart’s offices over the “offensive” and “pro-homosexual” video.

“In a move that most Christians probably never expected to see,” Wildman writes, “retail giant Walmart has posted an online video that normalizes homosexual relationships. For most Christians and other traditionalists, the idea that marriage is between a man and a woman is sacred. We’ve seen many large corporations reject that in their marketing, but I honestly never thought Walmart would join the cultural revolution and reject the beliefs of its customer base.”

“It’s clear that Walmart is on the path of elevating homosexual relationships to the same level as the male-female model of marriage,” Wildman elaborates. “At least with a company like Amazon, we knew they were liberal from the outset. But this seems more like a betrayal from a well-known friend. Sam Walton is probably turning over in his grave.”

Wildman has also started a petition to have the video removed from Wal-Mart’s websites.

Check out the video below:

Love Is In The Aisle: A dating show at Walmart, ep. 2

Is grocery shopping at Walmart first date-worthy? We thought it’d be a good idea. And these two definitely learned how much it could really reveal about a person…