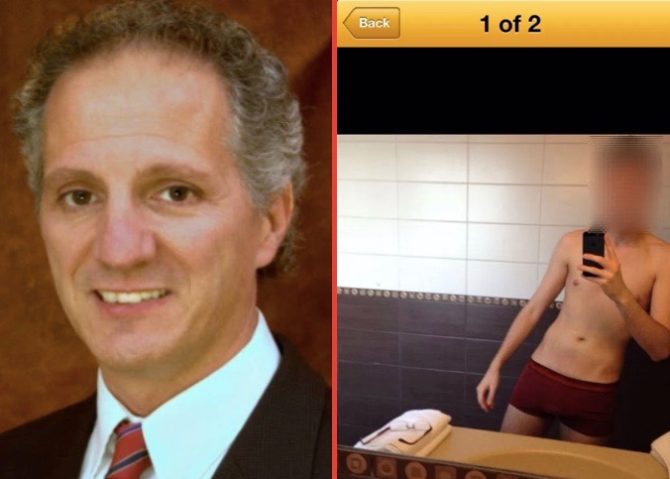 A congressional aide in Illinois was just fired after being busted shirtless in a car with a 17-year-old boy he met on Grindr.

56-year-old Dominic “Nick” Provenzano is, er, was deputy district director for US Rep. Randy Hultgren. That is until Hultgren’s office learned this week that a police officer had found a Provenzano and the teen inside an SUV with its lights off parked on a dead-end street.

Ironically, Rep. Hultgren is an antigay “family values” Republican who opposes same-sex marriage and believes creationism should be taught in public schools.

The incident between Provenzano and the teen actually happened last October. According to the recently obtained police report, Provenzano was sitting in the driver’s seat when the officer approached the vehicle. He told the cop that he and the kid, who was clothed, were just “hanging out” and “talking about life.”

When asked why he was shirtless, Provenzano said he had removed his shirt because he was hot.

Related: Antigay lawmaker caught on Grindr kindly asks for your vote in his re-election campaign

Provenzano, who used to work at a Christian retreat center and has served on the board of the McHenry County Catholic Prayer Breakfast, later told police that the interaction was “consensual in nature” and that he believed the boy was 18-years-old.

Meanwhile, the teen told police he had engaged in sexual contact with Provenzano in the car, but that he “willingly consented” to it after connecting with Provenzano on Grindr.

“There was no allegation of force … and (Provenzano) did not have any special relationship, such as a teacher or family member, that might support charges,” State’s Attorney Patrick Kenneally says.

“Prior to Wednesday, Nick had not made us aware of this,” Cunningham said. “He was immediately placed on leave and then terminated on Monday.”

Provenzano has not issued any comments on the matter.