A gay bar in Anchorage, Alaska has become the target of Nazi-loving vandals. Investigators found a sticker bearing a swastika posted on the exterior of the building.

Law enforcement officials have revealed they first received reports of the vandalism on May 25. The single sticker was found posted to the door of Mad Myrna’s, a local gay establishment. Investigators have further connected the crime to similar vandalism at the Alaska Jewish Museum, where the vandal had posted at least four stickers on the windows and door of the building.

The stickers themselves featured a swastika, along with the phrase “We are everywhere.” 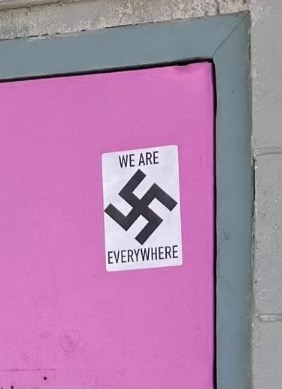 The Anchorage Daily News reports that security video from the Jewish Museum taken the night of the attack revealed a single perpetrator: a tall thin man in a hood and mask, driving a scooter. Anchorage police have appealed to the public for information about the case.

“What that sticker symbolizes is hate,” Anchorage police spokesperson MJ Thim said in a statement. “And we’re not going to stand for it, and there’s no place for it. And we’re going to investigate it and figure out what this is all about.”

Related: Neo-Nazi who called for “extermination” of queers gets outed in court

The Anchorage FBI office echoed that sentiment and will coordinate with police should the investigation turn up any evidence of federal crimes.

“If, in the course of the local investigation, information comes to light of a potential federal civil rights violation, the FBI is prepared to investigate,” FBI spokesperson Chloe Martin said in a statement.

“Swastikas have also become a symbol of white supremacy and the far right, and actions like this disproportionately impact people of color in the LGBTQ community,” Laura Carpenter, executive director of Identity Inc., a statewide LGBTQ+ organization headquartered in Anchorage told the press. “This is just another example of people trying to demonize the LGBTQ community and Jewish people.”