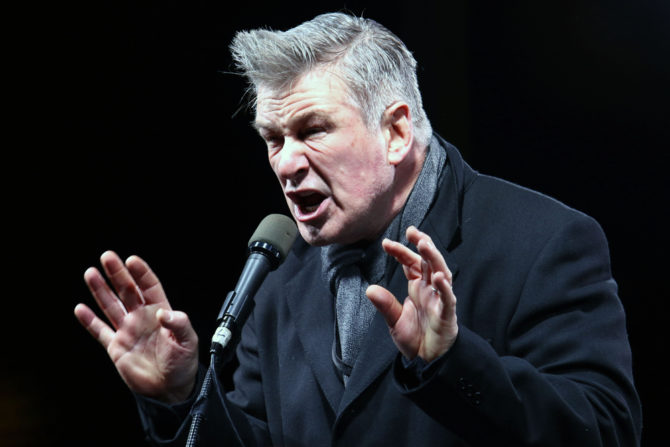 Alec Baldwin is once again letting his straight privilege show and it’s not a good look.

It all started when out comedian James Adomian recently told The Daily Beast that he thinks SNL creator Lorne Michaels is afraid to cast gay men.

“I think that Lorne Michaels is afraid of America’s dads,” Adomian remarked. Then he impersonated a douchey straight guy and said, “I’m not gonna let my kid watch a show with a gay man.”

And that’s when Baldwin got involved.

The 59-year-old actor responded with a barrage of snarky tweets that basically proved Adomian’s point (and reminded everyone that, deep down, Baldwin has always been and will always be a toxic male.)

First, he retweeted the Daily Beast article with the caption, “My dream is to, one day, be as gifted, as brave, as all-knowing as @jamesadomian.”

My dream is to, one day, be as gifted, as brave, as all-knowing as @jamesadomianhttps://t.co/qXyob7vqJX

People quickly called Baldwin out for being snarky.

When person actually took the time to point out the incredibly low number of SNL’s LGBTQ cast members. (Since SNL first premiered over 40 years ago, it has seen over 150 cast members, only two of whom were openly gay.)

I don’t understand why you link to articles you don’t like. I’m a fan, and now I know that SNL has only hired 2 openly gay male performers in its entire history, and yeah, that number seems weirdly low and problematic. Does Lorne Michaels have a problem with gay men?

Baldwin responded to the tweet with yet another dig at Adomian, who auditioned for SNL 13 years ago.

Do you think he has a problem with them? Based upon what? The bitter recriminations of those he didn’t hire?
Consider the source.

Well, Alec, can you identify a gay man he did hire? That’s like saying the only women who think there’s misogyny are the ones who haven’t gotten to be President yet.

To which, Baldwin responded:

I can identify several.
But they were not out then and are not out now.
You realize that possibility, right?

Branum wasn’t having any of it. He shut down the conversation by calling out Baldwin’s complete unwillingness to see past his own straight privilege or even acknowledge the fact that maybe, just maybe, there might be a disparity in SNL‘s casting.

That’s the point, Alec. Opportunities are denied us for being out. The fact that gay men get cast on SNL when they stay closeted and play ball doesn’t make the show inclusive. But please say “Hi” to your secret gay friends for me! https://t.co/o7Odx7kJ7S